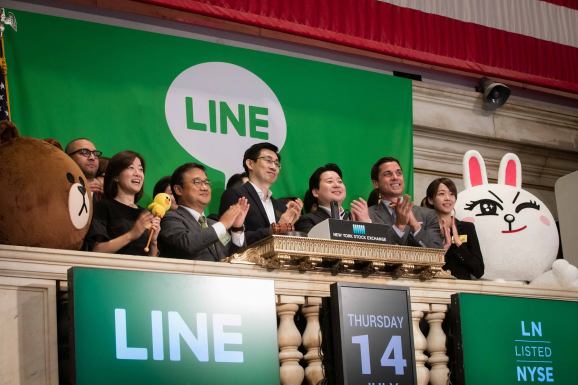 Line rings the opening bell on the New York Stock Exchange on July 14, 2016.

Messaging app company Line today closed out its first day on the New York Stock Exchange at $41.58 per share, down just 1 percent from the $42 price at which it started trading this morning.

For most of today’s market hours the stock was trading below the debut price. But Line raised more than $1.1 billion in its initial public offering (IPO) earlier this week, and today the stock closed way above the IPO price of $33.

Japan-based Line faces competition from many directions, including Facebook, Google, Kakao Talk, Microsoft, Rakuten, Snapchat, and Tencent. The company will make its debut on the Tokyo Stock Exchange tomorrow.

Smaller IPOs in 2016 include Acacia Communications, Talend, and Twilio.

In addition to the core Line messaging app, Line also has a music streaming service and a mobile payment service. The company is launching its own SIM cards through which it will let people make Line voice calls and listen to music on Line Music without using up their data plans.

Line ended the day with a market cap of $7.28 billion.