Virtual reality could be a big driver for gamer PCs with powerful graphics cards. That’s why Nvidia wants it to succeed. And to boost VR hardware sales, Nvidia is launching its own game, VR Funhouse for the HTC Vive VR headset. The title is the first game that Nvidia has ever released, and it’s available today on Valve’s Steam digital distribution system.

The game stands apart as one of the most technically sophisticated ever made, the company said, because it uses precise physics to help create a more realistic experience for the player. You can interact with the environment, rather than passively observe it.

I played VR Funhouse, and it was a blast. Each of the seven minigames takes advantage of VR technology in a different way. The games use accurate physics to help improve the sense of immersion, or the feeling that you’ve been transported into a virtual world. 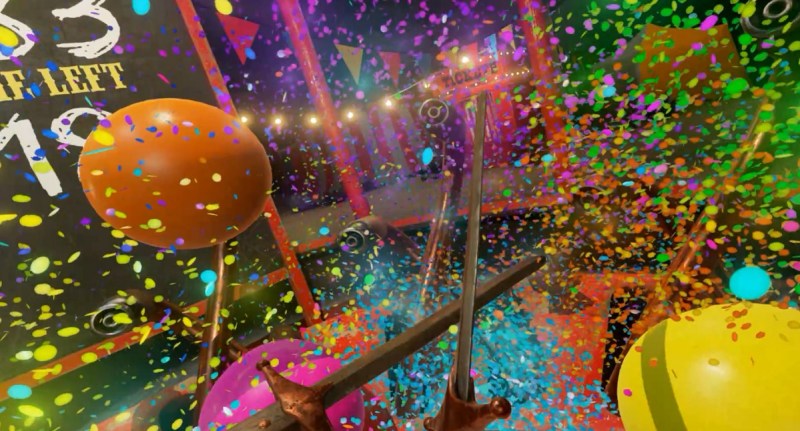 Above: The Balloon Knight game can render a huge amount of confetti.

Nvidia has been working on physics for many years, and it acquired the PhysX technology via Ageia Technologies eight years ago. But it only decided to make a game that fully exploited physics in VR about a year ago.

“In VR, you are inside the experience, and you are interacting with these objects with your hands,” Jason Paul, the general manager for emerging products at Nvidia, told GamesBeat. “If those objects don’t interact properly, it breaks the presence, or breaks the experience. We realized physics was moving from a visual effect to a fundamental part of immersion. It’s about simulating an environment in a realistic manner.”

All of the minigames are set in a carnival, and they fully exploit both the HTC Vive headset and its hand controls. So you can engage in midway games such as shooting paint into a clown’s mouth in Clown Painter.

“We thought it would be a great sandbox, putting people in a virtual room where they could do anything,” Paul said. “As we prototyped it, we found it was cool enough to turn it into a game. We’re excited to be taking it and shipping it on Steam.”

Nvidia had to create new physical effects as the engineers had to figure out what happens if something falls on your head in VR. It’s not perfect, as I had trouble hitting a ball off a table with a baseball bat. But the tech is pretty sophisticated, incorporating Nvidia’s GameWorks SDK, PhysX, Nvidia Hairworks, Nvidia Flow, Nvidia Flex, and Nvidia Destruction. All of those features enable cool things, such as thousands of strands of hair on the heads of creatures in a whack-a-mole type minigame. 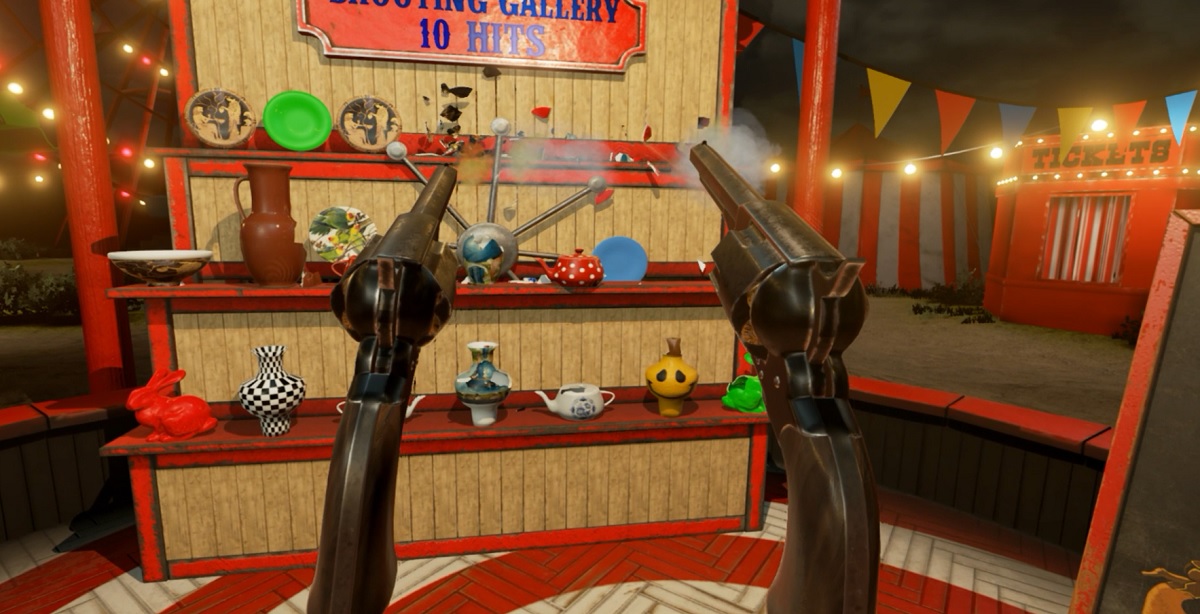 Above: Shooting Gallery in VR Funhouse is very accurate.

Paul said that Nvidia will make VR Funhouse available for free to download, and it will eventually release it as open source later this summer, allowing gamers to create their own “mods,” or minigames. The games have special effects such as haptics, or touch feedback, as well as positional sound. The games are built for all ages. Nvidia will add more levels over time.

The Fire Archer minigame lets you become an archer. You can grab an arrow with one hand, string it into a bow that you hold in your other hand, and then dip it into a fire. You can then shoot a flaming arrow at targets.

With Balloon Knight, you can take a couple of swords and slice a bunch of balloons. When the balloons burst, they release a bunch of confetti. With Mole Boxing, I had to wear boxing gloves and punch out moles who came at me from six different directions. And in Cannon Skeet, a cannon launched some glass plates and vases into the air, and I had to shoot them with my guns.

My favorite was the Shooting Gallery, where I had a couple of long pistols. I fired them at plates and vases and watched them shatter. I could also shoot the wood and even try to spell my name in it. It was very accurate.

The game runs only on the HTC Vive for the moment, and it can run on Nvidia’s newly announced GeForce GTX 1060 graphics cards, which cost $250.