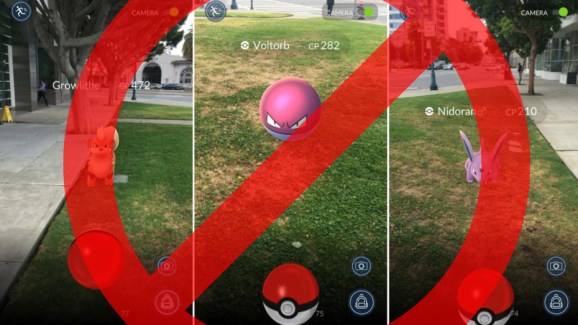 You won’t get far today without actually bumping into a smartphone-addicted zombie playing Pokémon Go, the hit mobile title from Google-incubated Niantic Labs and The Pokémon Company. I’m one of the zombies. Please forgive me for ignoring oncoming traffic, laws of trespassing on private property, and other petty demands of the “real world” — I’m busy hunting for an ultra-rare Mew. As a lifelong gamer, I’m loving the teenage nostalgia of catching em all. As an AR and VR investor, however, I have a long-term view of where AR is headed, and Pokémon Go, in its current format, isn’t part of it.

[Author Sunny Dhillon will be speaking at GamesBeat 2016 on AR/VR investments].

Augmented reality requires computer vision and dynamic mapping of the real world environment around you. It’s what Magic Leap, Microsoft HoloLens, and Google Tango are working on — not Pokémon Go. Current generation smartphones do nothing to dynamically make sense of the world around them through computer vision or depth sensing. Pokémon are tied to Google Maps’ fixed latitude and longitude. If augmented reality was involved, inherent real time depth mapping and object recognition would prohibit you finding a giant Goldeen in the middle of a baseball field or a Rattata on top of your pet cat as seen in memes like these, for example.

Calling Pokémon Go AR is like calling mobile 360 video VR. Both are incredibly low-end, basic demonstrations of what each technology will be capable of in the next five years. Just as the ability to interact with volumetric, light field captured avatars and in-game characters (such as those 8i provides) far exceeds a static, head-turning Google cardboard experience, so too will experiences from perfected AR hardware amaze its users, relative to today’s Pokémon Go gimmickry. Funnily enough, Magic Leap and HoloLens will soon provide an in-game experience much more akin to that advertised in the Pokémon Go TV commercials. These game trailers do not currently use in-game footage and don’t adequately represent the quality of Pokémon gameplay today, but Magic Leap will actually show you Pokémon in a far more ‘realistic’ fashion given its placing of the 3D monsters in a computer vision recognized environment. For an example of what to expect, check out this Magic Leap video.

Therefore, I think we need some clarity on nomenclature here: Pokémon Go is a location based game, not an AR game. I’ve had some experience with such mobile games — we invested in a company doing just this three years ago named Red Robot Labs. These games draw upon Google Maps data to take advantage of local geography, landmarks, and players. The tough thing about location based games is that you need adequate player liquidity — enough players playing your game across a wide enough geographic coverage. Without this, you get folks tuning in, only to be stuck in a ‘searching for opponents’ queue which eventually sees them churn after losing patience. The recognized IP has got folks playing the (currently) single-player game in droves and player vs player battling and monster trading will not be far off, by which point player liquidity will not be a problem.

Pokémon has done a great job of getting typically lazy gamers off their asses and outside to explore the real world around them, albeit through a fantastical world lens. This is a testament to the strength of the Pokémon IP — I don’t think there’s been a Pokémon game that hasn’t done well in the past to be honest. In this instance, the IP was able to fundamentally change gamer behavior and get them up on their feet in order to play, much in the same way as Nintendo was able to do 10 years ago with the Wii console. The game’s success is a reflection of how well the IP lends itself to a location based game. Pokémon is a beloved mid 90s Japanese animated franchise that follows Ash, Brock, and Misty progressing as amateur monster trainers…travelling across new lands hunting (and training) new Pokémon creatures. It’s an easy stretch of the imagination to immerse oneself in that narrative while ‘travelling around’, hunting for Pokémon in your own neighborhood.

Why do you even care?

The game has cashed in on the buzziness of AR and VR in the gaming world at present. I think it does a disservice in labeling Pokémon Go as AR, however, as it sets the bar too low for the public’s initial intro to AR (which is likely to be 5 years away at meaningful scale). True AR applications, gaming or otherwise, will come with the HoloLens, Magic Leap, and Tango … not a location-based game that’s part of an industry too impatient for the advanced AR headsets (or even depth-sensing enabled smartphones) that we know are coming.  Truly immersive and interactive A/VR is still in development and I’m personally willing to wait for the good stuff, rather than embrace half-finished charlatans along the way.

Don’t get me wrong — Pokémon Go is super-fun, and 360 video will definitely continue to grow in popularity as cameras become more affordable and widely available. I just think it’s important to elucidate why neither represents AR or VR. Pokemon Go is a great example of a well-executed location based game. Not an augmented reality one.

The principal and cofounder at Signia Venture Partners, Sunny Dhillon is an early stage venture capitalist focused on seed and Series A investments in gaming, digital media, content, and commerce.