Consumer computing platform changes aren’t straight lines — they’re waves. PC, internet, and mobile were the first three waves, and each was faster, larger, and more disruptive than the last. Now the fourth wave of virtual, augmented, and mixed reality is bearing down on us, so let’s dive in. 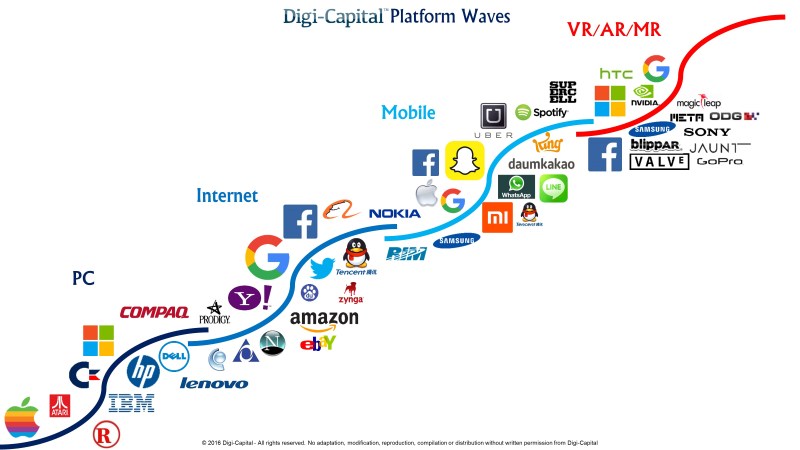 Growing up in the surf teaches you a thing or two about waves and how to read them. One of the things you learn is that waves are not solitary creatures, and they always come in sets. So the fourth wave is actually a set of three overlapping waves: virtual reality, augmented reality and mixed reality.

The first three platform waves came increasingly quickly, reached greater heights, and broke differently each time. The PC wave took almost 20 years from the launch of the Apple II before it accelerated in the ’90s. Fixed broadband internet took less than five years from launch before hitting its inflection point in the 2000s. Smartphones took only three years after the launch of the iPhone before they began to rocket, producing much of the tech innovation that is commercially successful today.

Today, AR/VR is still in the first of the four stages of tech market development (hype cycle, facing reality, liftoff, sustainable market). Its installed base, from low-end Cardboard through high-end HoloLens, is unlikely to top 100 million units until 2018 (note: that is units installed in total, not annual sales). There will be a few billion dollars revenue this year, a progressive ramp in 2017, and a hoped for inflection point in 2018. So what will cause the fourth wave to break?

The waves within the new reality have different but related dynamics driving their scale and timing.

Virtual reality’s two forms (mobile and console/PC) have different drivers, despite being similar in many ways. Console/PC VR delivers the best user experience today, but is constrained by a potential host platform installed base of 40 million Sony PS4 consoles and less than 20 million VR capable PCs globally. Those numbers will grow in coming years as the cost of VR hardware and host platforms comes down, but some subset of a potential 60 million host platforms (and counting) indicates a deep rather than broad market in the long term.

Mobile VR will be the growth market in terms of VR’s installed base, with prices from $99 down to free — free is a pretty compelling price. The question for mobile VR today is that the experience does not match console/PC VR, but that will continue to change in coming years. As smartphone manufacturers face slow growth and squeezed margins, core roadmaps are now focused on beefing up mobile VR quality as a source of growth.

Augmented and mixed reality face different challenges to their virtual cousins, and they are 18 to 24 months behind VR in terms of consumer market readiness. So today AR/MR leaders are focused on the enterprise market to drive revenue as the technology matures. For AR/MR to go truly consumer, there will need to be that magic combination of hero device, long battery life, cellular capability, strong app ecosystem and telco cross-subsidization to make AR/MR as useful and accessible to mass consumers as smartphones are today. Based on current roadmaps, that looks like it might be around 2018. While it could take longer, when that happens the fourth wave will truly start to break. 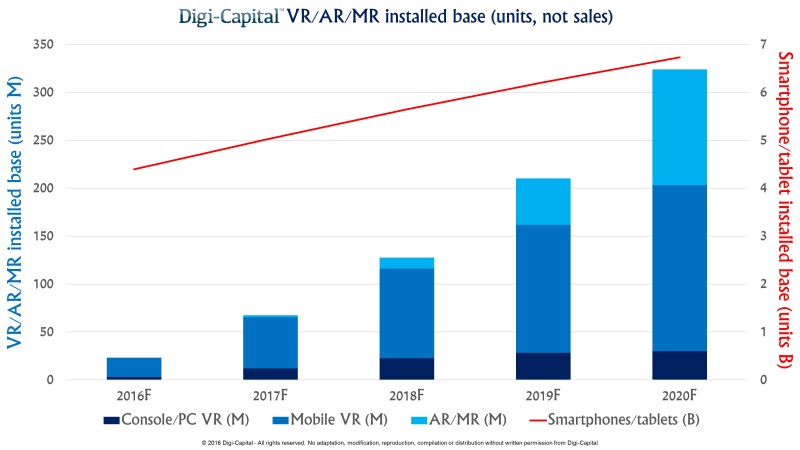 VR could be big, and AR/MR could be bigger and take longer to develop. In the long run, AR/MR could replace the smartphone in your pocket. But despite the rapid growth potential of the fourth wave, we are still talking about an early adopter “Tesla” market for the next five years (think of how many Teslas you see in Menlo Park, California, compared to Lost Springs, Wyoming). With a potential installed base (again units installed in total, not annual sales) in the low single digit hundreds of millions from low-end Cardboard through high-end HoloLens, that’s still only 5 percent of the global smartphone/tablet installed base by 2020. So high growth from a standing start, but it could take until 2025 for the fourth wave to truly cannibalize the mobile installed base at scale. 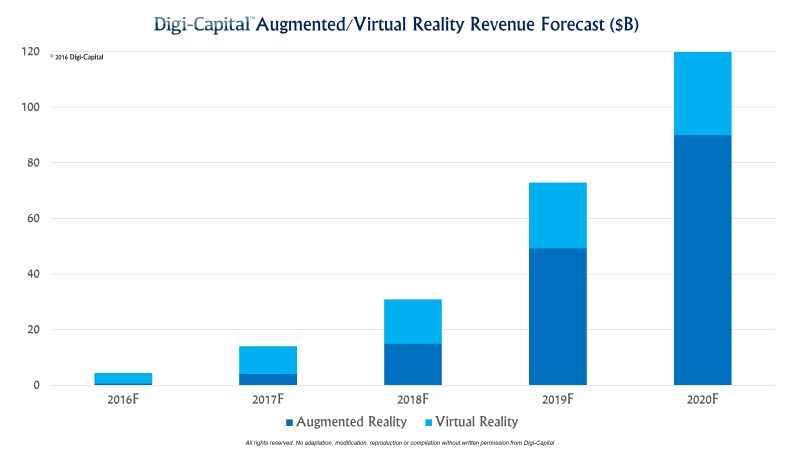 The revenue side of the fourth wave comes down to installed bases, use cases and unit economics. While the installed base discussion is always up for grabs, what will people do and what could they spend doing it?

Despite AR’s high cost today, long run hardware price points similar to smartphones could drive large hardware revenues for device makers. AR software and services might have similar economics to today’s mobile market, as they both cannibalize and grow it. A large AR user base would be a major revenue source for TV/film, enterprise, advertising, and consumer apps from Facebook to Uber to Clash of Clans. Amazon and Alibaba will have an entirely new platform for selling to a mass audience. Together with innovative applications nobody has thought of yet, AR’s scale could prove a bonanza for mobile networks’ voice and data businesses. Someone has to pay for all that mobile data.

Our revenue forecasts by sector, geography and business model from 2016 to 2020 are covered in detail here, and below is what the market could look like in 2020. Between now and then we’ll be refining regularly as more data becomes available, and expect a lot of debate about where the market is headed. 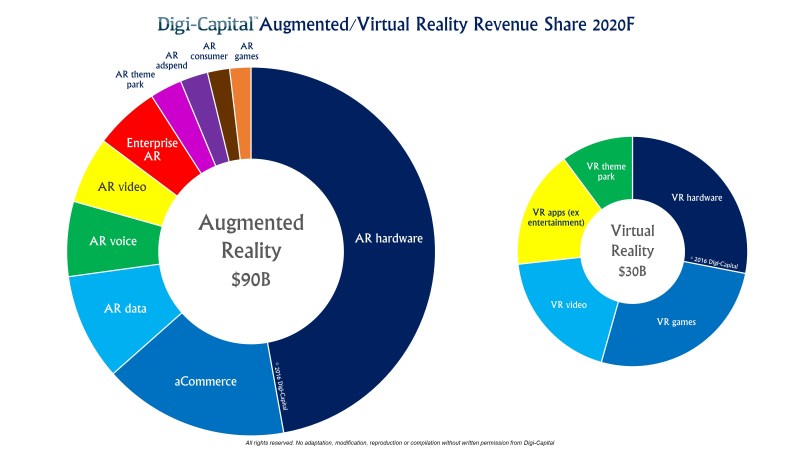 There are different ways you can pick a wave wrong. If the wave is smaller than you expect, you just bob up and down a bit. If the wave is much bigger than you think, you get dumped head first into the sand. Not fun. But platform changes are more like tidal waves, and are much more dangerous for incumbents than regular waves. When did you last use your Nokia?

Right now VR/AR/MR is in peak hype cycle, but going into next year we could enter “facing reality” (no pun intended) mode. That’s where the perception of the market’s long term potential dips, and is like the tide going out before a tidal wave makes landfall. Good luck if you stay on the beach when that happens.

So read the wave right and ride the curl. Now that’s my idea of a good time.

Tim Merel is the founder/CEO of Eyetouch Reality and Digi-Capital.