In the mid-2000s, some reporters I know started using a piece of desktop software called Scrivener to organize their notes and drafts for longer work projects, particularly narrative journalism that involved scenes interspersed with explanatory passages. Of course, things like Microsoft Word can work, but Scrivener was particularly well suited for juggling sections of text and supporting many types of content, not just text.

But today, that changed, because Literature & Latte has put together a beta of an iOS app, and I’m writing this article in it right now. And it’s great. Of course, I can store the data for this file on the iPhone 6s that the app is running on. But the app developers have provided a feature that you would expect for a mobile-friendly word processing app: the ability to store the app in a cloud service, specifically Dropbox. So that’s what I’m doing.

There are certainly other word processing apps that work well on iOS devices, including Word, Google Docs, Quip, and Ulysses, which won an Apple Design Award at this year’s WWDC developer conference. But now that it’s available as a native mobile app, Scrivener will likely enjoy a new wave of adoption from those who fondly remember its advantages on desktop and those who want to work on longer documents while they’re on the go.

On the iPad, the app takes advantage of Split View — you can shuffle individual files in a project on a corkboard, just like on the desktop version of Scrivener, and you can even look at two documents at the same time if you’d like. But the app works just fine on the iPhone, too.

There are certainly some shortcomings. You can sync to Dropbox, but you can’t sync to other cloud services– like Box, Google Drive, or OneDrive. While you can opt to sync files to Dropbox when you tap the appropriate button in the app or close the app, it doesn’t automatically sync files as they change, unlike Word or Google Docs. There isn’t much you can do with the 3D Touch capability that arrived with iOS 9. The app doesn’t have a dark mode. And, at least for now, there’s no native Android app.

But still, Scrivener on iOS is pretty great.

Sure, I can get around with the virtual keyboard in this app, but I prefer to use it with my Apple Extended Keyboard II from 1990.

I like the additional row of keys that you see above the virtual keyboard — a pair of quotation marks, a single quote mark, a comma, a period, a question mark, an exclamation mark, a colon, and a semicolon. If you don’t like this option, you can turn it off.

I like the word count at the top of the document. (If that metric isn’t useful for you, you can tell Scrivener to display a character count instead.) I like the settings for the “find” function, including “find and replace all.”

If you want, you can “split” the text in any given file at a certain point, so what’s before your cursor stays in the current file, and what’s after your cursor gets dumped into a brand new file. This is perfect when you have the realization that you need to start a new chapter because the existing file is just too long as is.

While you’re working on one file, it’s very easy to switch to another. You just hit the clock button to bring up a Recent Documents menu. And you can designate the most important files by bookmarking them  — just tap the bookmark at the bottom of the screen while you’re editing. When you open up the file from the Bookmarks menu, you’ll be taken right to the place where you left off. 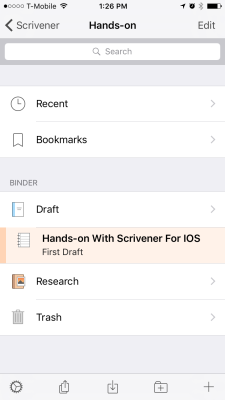 Above: The menu for a project, including the binder.

It’s nice that you can rearrange the order of files in the binder for each project, and you can choose to make a file double as a folder that stores other files. Scrivener lets you select just the right icon to use for each file and folder within the binder, and use colored labels to differentiate files and folders. And you can add a note and a synopsis for each file and specify the status, like “first draft” or “to do.” It’s possible to customize status options and labels.

Scrivener takes advantage of the mobile interface when you’re looking at the binder. When you swipe left on a file or folder, you’ll see two options pop up: “More” and “Move.” “More” gives you options like sharing, duplicating, and copying content to put it in other places within a project. And “Move” will let you move files or folders wholesale. If the type is too big or too small while you’re editing, you can pinch to zoom in or out.

Folders in the binder, meanwhile, have options like “Collapse” (or “Expand”) and “Compile.” In Scrivener, compiling means putting all the files together into one large master file. You can adjust the options for file format, style, paper size, header, and footer when you’re ready to compile.

Above: Some of the document icons you can choose to use for each file.

You can upload photos and other files from both your iOS device and cloud services, as you would expect.

You get a dedicated trash can for each project, instead of having to use one trash can across all of your projects. That speeds up the process of recovering something you had previously discarded. And trash cans get synced to Dropbox, so you can access them on other devices, including with the Scrivener apps for Mac and Windows. Swipe right on the Trash folder in the binder and you get an “Empty Trash” button.

There’s even a special scriptwriting mode that will appeal to people who write TV shows, films, or plays. With a tap, you can switch between typing in information for a scene heading, action, character, a parenthetical, dialogue, a transition, or a shot. 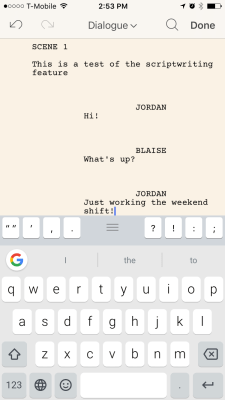 Above: Scriptwriting mode in Scrivener.

I guess what I’m trying to say is that Scrivener for iOS is full-featured and highly customizable.

It took a while to show up, but now it’s here, and for serious writers, it’s worth checking out.