Pokémon Go is an international phenomenon not just because it offers a nostalgia-fueled game anyone can access on a smartphone, but also because it gets people out into the real world interacting with one another and the cities around them. As I’m sitting here at my desk writing this story, I can tell you that a five-minute walk to the park and golf course across the street will yield me two PokéStops, with Pokémon spawning in and around the links and pond. It’s prime Pokémon Go real estate.

Then if I venture into the heart of my city along Main Street or near any shopping centers, I’ll start to see a lot more activity. Metropolitan hubs like San Francisco ramp it up higher and keep it there. Scattered around the world are millions of businesses of all sizes, and Pokémon Go sees all of you. It may not have your business marked as a PokéStop – at least not yet – but for the ones that are already in the database, it would behoove you to pay attention and take advantage of these little pocket monsters. Lure Deals, a new startup, is here to help you do just that.

In the world of Pokémon Go, players can place what are known as “lures” at a PokéStop, which increases the likelihood of the virtual critters showing up at that spot. This gives players a reason to visit — lures appear at stops, and they last for 30 minutes. Since anything — a park bench, a clock tower, or even a mom-and-pop coffee shop — can be a PokéStop, chances are that players could start showing up in waves at your local business, regardless of the time of day or day of the week.

Of course, any business could just open up a Pokémon Go account, buy a few lures, and start attracting players – but how can you be sure those players care about your business? And how can you let players know about the lure that aren’t within the small radius the game displays?

“We wanted to give power back to small businesses by leveraging Pokémon Go,” said Britt White, the managing partner at TKM Labs.

Since it’s often difficult for smaller companies to get noticed and become part of partnerships with these major app companies, something like Pokémon Go, which pulls its data from the existing Ingress game by the same developer, Niantic Labs, is an opportunity.

Tri Nguyen, another managing partner at TKM Labs, compared it to Snapchat. Large companies like Taco Bell had no problem making a geofilter that let people tag themselves at the fast-food chain’s locations, but smaller companies often don’t take advantage of that. In fact, larger restaurants are already running Pokémon Go-related specials, discounts, and promotions. Lure Deals wants to not only consult on these types of initiatives but drive traffic as well.

They’ve started building their list of registered users – which is already over 1,300 in 36 hours following their soft launch – with players spread out across the U.S. currently. Eventually, as they continue to grow the network, their value proposition to prospective clients will increase as well. 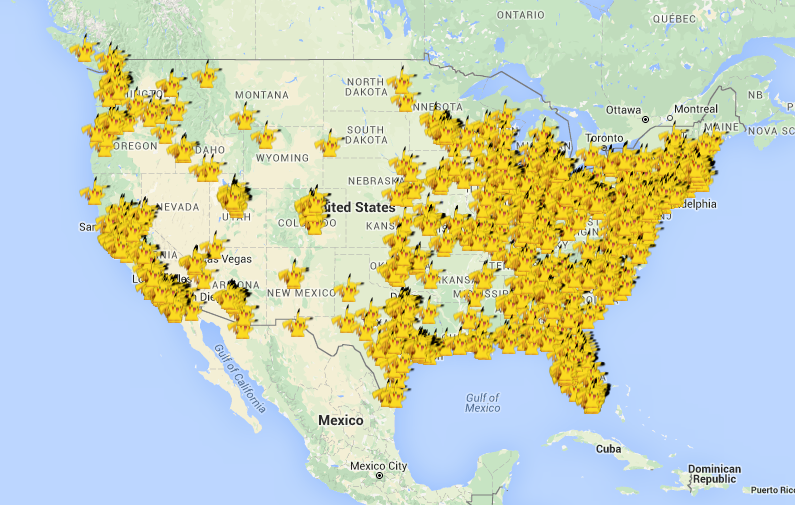 Above: A look at Lure Deals’ map. That’s a lot of Pikachus.

The way Lure Deals works is simple. If you’re a player, you sign up on their website to become part of the network. Once you fill out the information, you’ll receive assignments on where you can drop lures – and claim bounties to actually get paid and make money in the process – at predetermined locations in your area. From the website:

You can make money by placing Lures on specific spots! We need Pokémon Trainers who are conquering this brave new world and want to make a little extra side money doing so! We get requests for lures to be placed, and if it’s within your area, we’ll notify you! The first person that places the lure on that spot gets the bounty!

Similarly, if you have a business, you sign up on their website to start the process. It works like this: fill out the business profile, set a deal and choose a block of time to run the deal, Lure Deals announces it through their network of nearby Pokémon Go players, and they come flocking to you.

Based on businesses they’ve talked to that have been using lures from a purely experimental perspective, without a network and without any real planning, they’re noticing a 10 percent to 20 percent boost in revenue for the days that they ran a lure compared to the days that they did not.

So far, they’ve arranged over 10 pilot programs with businesses to run in some of their most trafficked areas and will roll that out more over time as Lure Deals continues to grow.

Niantic Labs is working on an ad model for businesses, but they’re taking a different approach. As of the time of publication, the folks at TKM Labs and Lure Deals have not spoken to Niantic, The Pokémon Company, or Nintendo about their business or any form of collaboration.

Clearly, a business model like this will live and die by the size and quality of the network, so it will take time to really reach critical mass for Lure Deals. But by getting started early, choosing a great name, and building from a grassroots perspective, they’re on the right track.

You can submit a request for your business or location to become a PokéStop, but Niantic is inundated with requests.

Additionally, Yelp now allows you to filter places that have PokéStops, further pushing people to businesses with the valuable digital real estate to draw in new customers.