In the second quarter, China hit a new milestone as it surpassed the U.S. to become the No. 1 country for iOS game revenue, according to market researcher App Annie.

The change was inevitable, and it shows the shifting tides of the $36 billion mobile game industry. App Annie said that revenue for homegrown Chinese mobile games such as Fantasy Westward Journey, Westward Journey Online, and Hero Moba fueled the growth. Meanwhile, foreign titles, such as Clash Royale (ranked at No. 10 in China), played a lesser role. 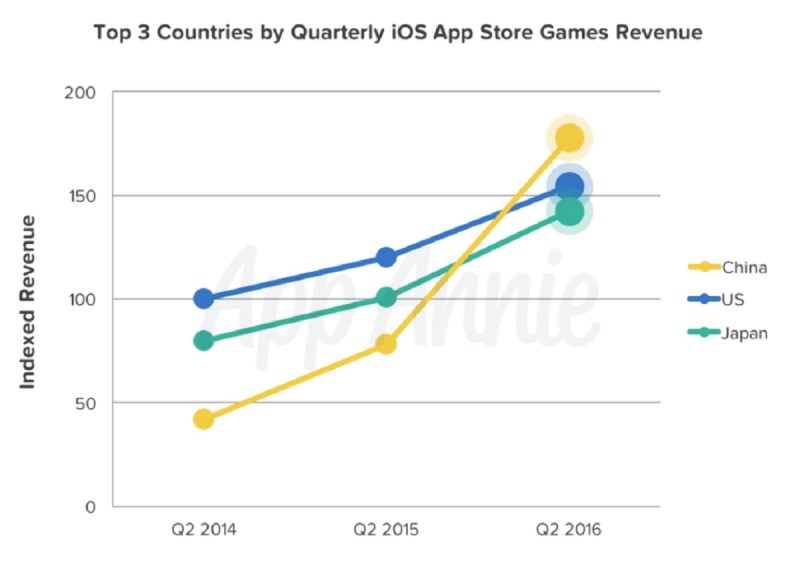 The growth of China’s iOS game business is likely to light a fire under Western developers who have been slow about growing their revenues in China, where a host of differences make it very hard for Western content to succeed. It probably won’t help that China is about to institute some strict censorship for every single game that launches in the Chinese market. To succeed in China, Western developers have to partner with local Chinese companies, App Annie said.

App Annie predicted last quarter that the country might soon eclipse U.S. game revenues on iOS. And China nearly doubled the iOS App Store revenues that it had in the second quarter of 2015. Games was the No. 1 category in terms of market share growth in worldwide iOS revenue from Q2 2015 to Q2 2016. Games account for nearly 75 percent of iOS revenue across the globe.

Overall, China, the U.S., and Japan account for 75 percent of game revenue on iOS.