European food delivery startup Deliveroo is doubling down in its attempt to corner the lucrative food and beverage market in Europe with the news that it’s branching out into booze deliveries.

Founded out of London in 2013 by William Shu and Greg Orlowski, Deliveroo’s main differentiator so far from other food-delivery companies such as GrubHub and Just Eat is that it focuses on the “premium” end of the culinary spectrum, with many of the restaurants on board not traditionally offering a takeaway service, such as Nando’s, Wagamama, and Gourmet Burger Kitchen, as well as smaller indie eateries. Additionally, the company uses its own drivers and cyclists to deliver food, rather than relying on each restaurant having to hire their own.

The company has raised around $200 million in VC funding to date, including a chunky $100 million round eight months back. Though Deliveroo launched originally in the U.K., it has since branched out into multiple European markets, including the Netherlands, France, Germany, Belgium, Ireland, Spain, and Italy, as well as a handful of markets elsewhere, including Australia, Hong Kong, Singapore, and Dubai. 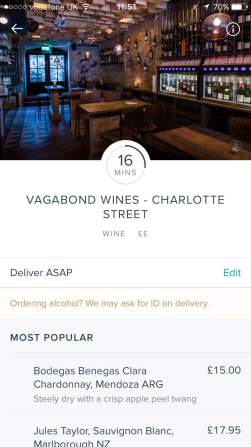 Though Deliveroo already offers alcohol as part of a restaurant’s normal delivery menu, the company is now moving to offer a dedicated booze service that promises to have a customer’s order at their door within 20 minutes.

The service will be limited to the U.K. only for now, including eight Majestic Wines stores across London, 20 BrewDog stores nationally, and a handful of other indie alcohol emporiums. The company wouldn’t confirm plans to expand this beyond the U.K.’s shores, given the logistical complexities of negotiating deals with retailers in each country, but a spokesperson did sound optimistic when probed on this subject.

At the moment we’re focused on launching this new service in the U.K., but we’re really excited at the potential of launching this in our international markets — we’ll keep you posted on any further roll out plans.

As you’d perhaps expect, Deliveroo’s delivery drivers may request ID if the buyer looks particularly young. And it’s also worth noting that there is a minimum order of £15 ($20), so this is best suited for those buying a particularly expensive bottle of wine, or a crate of BrewDog’s finest craft ale.

I’ve long argued that an on-demand booze delivery service would go down a storm in the U.K., but a consistent, mobile-first service has yet to materialize until now.

In the U.S., it’s a different story, where the alcohol delivery market has gotten somewhat saturated — a number of players have cropped up across the U.S. in recent years. This has led to a degree of consolidation, however, with Thirstie acquiring DrinkFly last year and Delivery.com acquiring BrewDrop to boost alcohol orders in Texas. But consolidation is only part of the solution to the underlying problem that there just isn’t enough demand for something as niche as short-term alcohol delivery.

This is why Thirstie recently expanded into a mail-order service that focuses on premium alcohol brands — it’s all about trying to achieve scale. “The fact of the matter is that consumers don’t always demand product delivery in 2 hours or less, and many of them just really want to discover something exclusive and new,” explained Thirstie CEO Devaraj Southworth. “They’re looking for a pleasant experience that delivers quality product to their front door, as long as delivery expectations are managed.”

Deliveroo’s model for tackling this scalability issue might just work. By using its existing network of drivers and cyclists that are already out there dispatching food orders, and partnering with alcohol sellers that would otherwise be disinclined to offer delivery services of their own, Deliveroo may have found the perfect balance to make on-demand booze delivery work.

“Before using Deliveroo we were unable to offer a delivery service; like many independent outfits, we didn’t have the resources or manpower to make it happen,” said James Hickson, owner and managing director at We Brought Beer, a partner in the early pilot testing.

In short, Deliveroo’s new offering is a complementary service that’s leveraging the power of its existing network and infrastructure, and it’s something that could quite conceivably be opened into any vertical that requires short-term deliveries.

So is this something that we could see with Deliveroo, similar to how the likes of Uber are expanding and reappropriating its transport network for other purposes?

“Deliveroo was founded on a passion for food, and this is at the core of everything we do,” a spokesperson said. “We’re really excited to launch our standalone alcohol service, as it seemed like a natural expansion to our service. We’re always interested in exploring potential opportunities to innovate.”

Make of that what you will.