Microsoft has turned on a new set of Windows Tips that warn Windows 10 users that Google Chrome or Mozilla Firefox is draining their laptop’s battery. The solution, according to the notification, is to use Microsoft Edge. We reached out to Microsoft for clarification.

“Microsoft Edge was designed exclusively for Windows 10 with features and functionality that enhance the browsing experience such as Cortana, easy sharing, reading, and researching,” a Microsoft spokesperson told VentureBeat. “These Windows Tips notifications were created to provide people with quick, easy information that can help them enhance their Windows 10 experience, including information that can help users extend battery life. That said, with Windows 10 you can easily choose the default browser and search engine of your choice.” 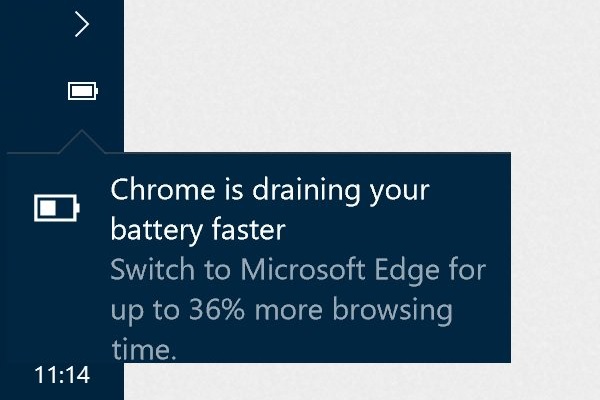 This new set of Windows Tips for Windows 10 was spotted by infamous Windows Phone app developer Rudy Huyn — as you can see in the screenshot above, Huyn received the prompt while using Chrome. We asked Microsoft, and a spokesperson confirmed the prompts also happen for Firefox users. They were first turned on in early July.

The timing makes sense. Late last month, Microsoft kicked off a battery-savings campaign for Edge. The company released benchmarks showing Edge is more power-efficient than Chrome, Firefox, and Opera, at least in some scenarios.

Also at the time, Microsoft announced it is bringing more power-saving improvements to Edge. These will ship with Windows 10 Anniversary Update, scheduled to arrive on August 2.

While it’s great to see Microsoft pushing the limits of power efficiency in Edge, leveraging notifications within Windows 10 to promote them could be seen as poor practice. If Chrome, Firefox, or Opera were more battery efficient than Edge, would their respective companies be allowed to leverage Windows Tips in the same way?

Nope. This is of course not the first time Microsoft has used other services to recommend its own browser, and given that competitors do the same thing (just try opening google.com in a non-Chrome browser), it certainly won’t be the last.