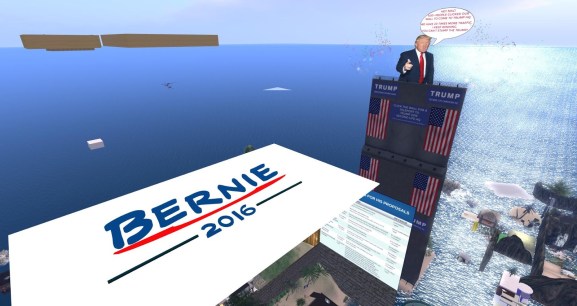 The 2016 United States presidential election is weird, but the Internet is doing its best to prove it can always get stranger.

Supporters of Republican presidential primary leader Donald Trump recently turned into demons and stormed the unofficial headquarters for Bernie Sanders in the online virtual world of Second Life while shouting “Trump! Trump! Trump!” This is an online world where people can take on an alternate identity and coexist with others in a 3D social space. Bixyl Shuftan, a (and this is the best thing I’ve ever written) “roving furry reporter,” first wrote about political griefing inside Second Life last week and revealed that the battle between Trump and Bernie supporters escalated beyond characters shouting at one another.

I wanted to see this for myself, so I decided to jump into Second Life. This took me on a journey, and I came away … different. But I also think that Second Life is helping me better understand the potential of online social games and why dark corners of the Web are so obsessed with The Donald.

The first thing I did after downloading Second Life was check out Sanders’ HQ. I found that Trump’s crew erected a wall (surprise) that towers over the Sanders gathering place. In response, and without a hint of irony, the Sanders supporters built a wall of their own to keep Donald Trump’s followers out. After exploring the monument of the reality TV star and potential presidential nominee, I clicked on the wall, and an invitation to the unofficial Trump headquarters inside Second Life popped up. I accepted, of course, and ended up meeting an interesting gang of characters — although it’s hard to avoid something like that in this game.

I've been with these Second Life Trump supporters for 30 seconds, and it's already priceless. pic.twitter.com/trFOdEXfNG

I kinda had an idea of what to expect from a group of mostly young Trump supporters on the internet. The often-intolerant image-posting forum 4Chan, for example, has a number of users who constantly feed each other inaccurate or offensive memes about why Trump is wonderful. The denizens of these boards defend themselves by claiming they are engaging in satire that “only an idiot would take seriously.” That seems disingenuous considering 4Chan is often the source for harassment campaigns that target outspoken feminists and people they perceive as censors of Japanese video games.

J.P. Laszlo, the owner of the Trump HQ in Second Life, told GamesBeat that they definitely take inspiration from 4Chan.

Something about adding animations, voices, and simulated game worlds to the way the Internet expresses its devotion to Trump makes it easier to interpret it as an act. For this collection of furries and multigenitaled dominatrixes, every slur and mean-spirited joke comes in a sneering “who’s going to stop me” tone. It’s like they have ended up in this room as an anthropomorphic fox with a human penis talking about hyper-conservative AM radio hosts and chemtrails only because it was the path that enabled them to offend as many people as possible.

Now, I don’t think this means that any of these Trump supporters are faking their beliefs. No one here is a closet liberal. This isn’t The Colbert Report, and Laszlo confirmed that.

“It’s classic Internet humor,” he said. “It’s memey. It’s slightly trolly. We don’t take ourselves too seriously. We know politics is a huge joke, but underneath all that, we know that Trump is probably the best chance we have of turning the country around. There is satire and humor on display, and it is done with a light heart. But we are real Trump supporters make no mistake on that.”

If “The Internet of Trump” is satirizing anything, it is the notion that their criticism applies to their beliefs. Everything the Second Life Trump crew does is to convey the message that their ideas are harmless, and you’re absurd if you suggest that they aren’t. They have go-to terms for everyone who (hypothetically) questions them. In virtual Trump HQ, every critic is a “cuck,” a “feminazi,” or a “libtard.” And those labels mean you’re not worth listening to — although Laszlo claims that isn’t what happens.

“Most anti-Trump people who come here are just trolls,” he said. “We tend to hear most people out and try to have a discussion with them. But if they want to troll, we’ll laugh and joke back with them.”

Laszlo and his friends built the wall outside the Sanders HQ, and he says that was just another joke.

“The wall was built as banter — not as intimidation,” he said. “Sadly, the person who owns Bernie HQ didn’t take it that way,” he said. “I mean we — don’t hate them. Bernie is an anti-establishment outsider independent running on a party ticket. But on the other hand, if they want to act like children, so be it.”

But it’s not offensive when it’s sad

Trump is on his way to locking up the Republican nomination for president, and many people find that concerning. But seeing his supporters in Second Life makes it much more difficult to worry about them.

They think they are so brash, and they are if you take them at face value. But mostly, they just seem lonely. You can laugh at that. I certainly did. But that wears off quickly. After an hour, I kinda just felt like I recognized their behavior and their “sense of humor” in myself.

You can tell all anyone in the Trump HQ wants is to offend people. I have that desire as well, but it’s something that I’ve tried to outgrow. If I didn’t — well, maybe I would’ve ended up starting a Trump HQ in an online multiplayer world.

I spent two nights in Trump HQ, and I never saw any liberal trolls visit. Laszlo and crew, in the end, are putting on their performance for no one but each other and the occasional drunk Canadian.

I thought that my journey with the Trump club ended with a banning, and it had nothing to do with Trump or politics. I let that weak part of myself take over and start trolling someone who sounded a bit drunk. I joked about us going to huff paint together. He didn’t think that was very clever, and I learned the hard way that he has moderator powers for the HQ. I spent a minute trying to get back in before giving up.

After getting banned, I realized I needed to give the people inside the room a chance to comment on this story. I figured I’d get some mild curiosity, and then I would be done with this whole experiment. I reached out to Laszlo and explained what I was writing. He responded, and they lifted the ban.

When I returned to the room, a different mood greeted me. Everyone mentioned they were surprised that I was a journalist because I was using a hideous avatar after fiddling with the create-a-character features. They also assumed I was working on a “hit piece” about Trump supporters. And maybe that’s what I intended, but I had no idea what to expect when I downloaded the Second Life launcher. It was pure chance that I clicked on that wall and ended up teleporting to a Trump HQ where a group of his supporters were going on racist tirades.

But I could understand their skepticism, and I also remembered how I’m always begging vicious trolls who harass people on behalf of hate groups like Gamergate to remember that they are targeting a human being. And I kinda forced myself to listen to that plea even for some racist Trump supporters.

So I stuck around to give them a chance to explain themselves.

Laszlo said he would give me the benefit of the doubt, and he was the reason I was able to continue hanging out in the room. He did ask me to mention that the owner of the building (Second Life has a complex real estate market) is an Asian person and that two of the moderators are Hispanic. This was presented as evidence that the group is not some offshoot of a white-power movement.

But white power comes in a lot of flavors, and this one sure did taste like “we’ll accept the good Mexicans.”

But hours later, I realized that I was enjoying hanging out with these people. As long as I didn’t engage on any of the truly troublesome comments, the mood in the room remained welcoming. When we weren’t talking about politics or bigotry, we were just doing what people sharing a 3D gaming world do: We made dumb jokes, we shared some links of some Disney movies that snuck in some sex stuff, and we talked about movies (turns out we all fondly remember that 1990s Jeremy Piven comedy PCU).

This is the power of social games. Earlier that night, I told everyone in the room that they probably wouldn’t like what I was going to write. But because we could see our avatars sitting together, this exposure wore us down. We couldn’t help treating each other with some respect.

This is a power that virtual reality could seriously amplify. Facebook likely sees Oculus VR, its subsidiary that is making the Rift headset, as a way to get an early lead in the VR social space. We’ve had tastes of this in games like Hover Junkers for the HTC Vive, and that feels crucial to making VR mainstream. You need the headset. You need the motion controllers. The last piece is that you need other people.

As my avatar laid in one of the Trump HQ lounger chairs while striking the Ferris Bueller pose, it occurred to me that the point of this connection is that I could potentially leave a part of me with them. So I confronted them on their racism.

Predictably, the Trump fans went with their well-worn defense mechanism: “Every example of racism is a joke or a liberal troll trying to make Trump look bad.”

I had already finished the part of this story that mentioned how 4Chan is infamous for this deflection, so I didn’t even address it.

“Yeah, a part of me likes those kind of ‘deal with me being offensive’ jokes, too,” I said. “But if I come in here and cannot tell if you’re joking or not, then what’s the difference?”

I don’t expect to change anyone. I also don’t plan to visit the Trump HQ ever again.

Only one way to deal with this whole situation. pic.twitter.com/yhXUAdZbY5