In terms of App Store underdogs, it might be hard to find a bigger one than Nick Halavins of Latvia.

The 27-year-old developer has been programming for 16 years and has been part of several startups, which has allowed him to experience the emotional roller-coaster of entrepreneurship. But now, working almost entirely on his own, he’s built an anonymous chat app called AntiChat that is earning him global attention.

With the iOS version going strong and the Android version just recently released, Halavins is getting ready to make the leap to Silicon Valley. Like so many other immigrant entrepreneurs who land on those shores, he’s hoping the right network and the right luck will help him turn an early, modest success into the next Instagram or Snapchat.

“It was a long road,” he said. “But I think I created something that helps people talk about what they want.”

Whatever happens next, Halavins offers an important reminder that there are still ways for independent developers to break into the world of apps. In recent years, as both the Google and Apple app stores have become overcrowded, there’s been growing concern among developers about their ability to be discovered and connect with an audience.

At its recent Worldwide Developers conference, Apple announced a number of beneficial changes to its App Store policy, including new ways to get apps discovered and expanded use of subscriptions.

But even without those changes, Halavins has managed to get some traction. AntiChat has been available globally in the Apple App Store as a free download since last September. In Google Play, it was officially launched a week ago.

By Halavins’ calculations, in a number of countries, including the U.S, AntiChat appears as one of the top apps when users type keywords like “chat” or “chat apps.” That’s nothing to sneeze at, considering analysts estimate the number of App Store chat apps at about 11,000.

Official tracking services don’t break out a “chat category,” per se. But according to App Annie, AntiChat is seeing strong downloads in the much broader “social networking” category and remains 1st ranked in Italy and 2nd in Spain. It’s also quite popular in Turkmenistan and Russia. Most importantly, the app seems to be holding steady in terms of pace of downloads since it launched.

“It’s a huge accomplishment to get the traction,” said Danielle Levitas, an App Annie analyst. “But it’s another thing to stay there.”

Halavins says he has 1.6 million unique users, with half in English-speaking countries (the U.S., U.K., Canada, and Australia.) And those users are sending and receiving about 1 billion messages per month. 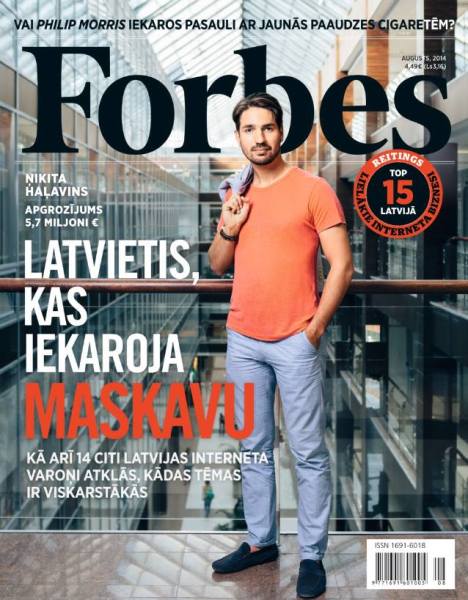 Above: Halavins on the cover of the Latvian edition of Forbes magazine.

So what is the app, and how does it work?

When it first launched, AntiChat had a viral feature that let you send messages outside the app to initiate anonymous private chats with people on your contact lists. When those people received the text message, the sender’s identity was masked.

If the recipient wanted to participate in the private chat, there was a link at the end of the text message to let them download the app and answer the anonymous message. This built-in virality was the key to helping Halavins attract the first users.

But when the app reached its first 100,000 users, people shifted to using it more for group chatting with strangers. Because Halavins had to foot the bill for the text messages, he decided to switch off that feature. Still, by that point, he had enough users that AntiChat continued to grow, helped by Apple’s promotion in the App Store.

“Everybody wants to talk about something that is hidden deep inside,” he said. “Unfortunately, in real life, it’s hard to do that.”

Beyond that, Halavins has recruited 70 volunteer moderators who spend about eight hours a day moderating the forums. They get paid in “karma,” the virtual currency used in the app. When the moderators tag users as violators, those people can face temporary restrictions or even bans.

Karma is how the app rewards active users and makes money. Each time users send a message, they receive 1 karma point, which can be used to buy rare avatars and send gifts to their new friends. People can subscribe to plans that boost their karma faster, can highlight their profiles, send private chats to their contacts, gain access to exclusive avatars, allow changing message colors, or get priority support from AntiChat.

The amount of Karma you have increases your visibility within the app, and Halavins said because people can see each other’s Karma, it creates a kind of competition.

“I looked at many monetizing strategies, like stickers, but that’s not what attracts people,” Halavins said. “What people want is respect and recognition. They want to be on top of the social ladder.”

Since the launch last year, the ensuing months have been intense for Halavins, as he seeks to stay ahead of the app’s growth. But this is also just the latest cycle of intensity for someone who has already amassed a lifetime’s worth of entrepreneurial war stories.

Halavins learned to program at the age of 11 and started a social network for schools in Latvia at the age of 15. He later moved to Moscow, where he launched a business social network called Professionali.ru. He raised about $2 million in venture capital, but a falling-out forced him out of the company.

Still, he managed to sell his minority stake when the company was estimated to be worth $11.5 million. He started a daily deals site, which he quickly sold, and continued working under an earn-out contract. But the Russian economy tanked after the collapse of the financial bubble, followed by the Ukrainian invasion, and the project was scuttled.

Feeling depressed and isolated, Halavins wanted to talk about his feelings but feared that doing so candidly could be dangerous. And that’s when he got the idea for an anonymous chat app. He taught himself Apple’s Swift programming language and built the first version of AntiChat. More recently, he hired a contractor to build the Android version that just launched this month.

So far, Halavins has been funding all of this himself. Money is coming in via the karma subscriptions, which just launched two months ago. But while he has more money coming in than going out, this self-financing limits the rate at which he can expand and hire.

So he’s planning to head to Silicon Valley to raise money in the next few months. He will arrive with a blend of careful optimism and self-confidence that he hopes will help him sell his vision to the region’s investors.

“I’d like to make the world a bit more honest and open,” he said. “I hope the result will be that people will harm other people less.”