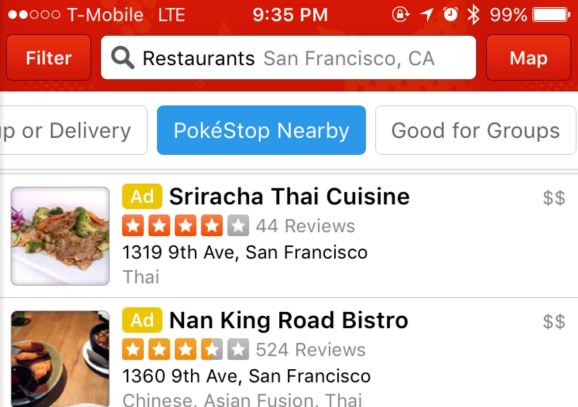 Business-review site Yelp gets in on the Pokémon Go phenomenon, helping businesses cash in on the game's popularity.

Pokémon Go uses augmented reality to fill our everyday surroundings with the franchise’s classic fantasy creatures. It displays the player’s location on a real-world map, with physical landmarks (parks, museums, local restaurants and businesses) doubling as in-game locations of interest. Some of these locations (PokéStops) dispense items and may attract “wild” Pokémon that players try to capture and evolve. Others locations (gyms) let players train their Pokémon in battle and challenge rival teams for control of the gym, not to mention bragging rights. The catch: players can only enjoy the benefits of PokéStops and gyms by being there in person.

Many real-world businesses and institutions at these in-game locations have seen dramatic increases in foot traffic since Go’s release on iOS and Android. Some businesses view it as a positive development that has increased their sales opportunities. But other real-world locations with popular in-game counterparts have faced unwelcome disruptions from players.

So how can businesses join (or escape) the Pokémon Go craze?

How in-game destinations came to be

Niantic Labs, the company behind Pokémon Go, based the current PokéStop and gym locations on data borrowed from its prior geolocation game: Ingress. Like Pokémon Go, Ingress requires players to travel to locations such as historical sites and public art displays to accomplish in-game tasks. Over a three-year period, Ingress evolved to include 5 million user-suggested, Niantic-approved locations. The real-world spot had to be publicly accessible, be safe, and exhibit some distinction, such as “hidden gem” or “hyper-local spot.” San Francisco, Niantic Labs’ base, is packed with PokéStops and gyms at many local coffee shops, restaurants, and boutiques.

While Niantic appears to have just begun to accept suggestions for new locations, we don’t know how it will vet suggestions and how long would-be hosts will have to wait. Another option is reputedly in the works: According to the company’s founder and CEO, John Hanke, Niantic plans to incorporate sponsored locations into Pokémon Go in the near future. Such arrangements may permit retailers and companies to pay for the right to be featured prominently on the Pokémon Go map. When Niantic incorporated a similar feature into Ingress, well-known brands such as Jamba Juice, Zipcar, and Duane Reade (think Walgreens) participated.

For some businesses, just being near an in-game location may be enough of a benefit. An in-game location can be accessed by any player within a certain radius, so the same PokéStop and gym may be reachable from several adjacent stores. Similarly, even if they are on the periphery of an in-game location, take-out ice cream vendors or restaurants with outside seating near a fountain or sculpture that serves as a PokéStop or gym may benefit from increased foot traffic.

Changing the odds: incense and lures

Even in the absence of sponsored locations, Pokémon Go is spreading beyond designated PokéStops or gyms. In the game, Pokémon can appear at just about any geolocation, even inside businesses and institutions that are not featured as in-game locations. To increase the chances of finding Pokémon, any player can attract more Pokémon to their vicinity by using an in-game item called “incense.” A player using an incense will increase their own chances of catching Pokémon at that location, but won’t affect the fortunes of nearby coffee drinkers, bowlers, or bookstore patrons who might also be playing.

However, if a player uses an in-game item called a “lure” to attract Pokémon to a specific PokéStop, any nearby business could find itself in the midst of a Pokémon storm. Unlike an incense, a lure increases the chance that Pokémon will appear for all players in the area. Once set, lures are visible to other players, and are likely to have the effect of attracting more players to the location to take advantage of the increased Pokémon. Each incense or lure is a one-time use item that can be obtained for free through gameplay, or through an in-app purchase of less than a dollar.

What if your business is not a Pokémon location, but you still want to get more involved in Go?  The best course of action may be to wait for Niantic Labs to roll out its sponsorship platform for in-game tie-ins and advertising opportunities. In the meantime, however, some businesses are already jumping in by using in-game items to attract potential customers.  Businesses and players, however, should keep in mind that the Terms of Use for Pokémon Go only allow players to use the app for “personal, noncommercial purposes”. For example, businesses and players alike should be careful not to perform or request services in the app “in exchange for payment outside the [a]pp”.

Opting out and taming the crowds

What if you don’t want a virtual stampede of Pokémon coming through your lobby? If your business (or museum, or place of worship) is an existing PokéStop or gym, you can submit a request to be removed as an in-game location to Niantic Labs; businesses can also report broader concerns regarding the game .

This may not solve the whole problem: an in-game location may still be close enough to create unwanted traffic, and players can play the game anywhere (albeit with varying success). What can be done? In general, private businesses and institutions have some right to regulate patron behavior through reasonable, fairly applied, non-discriminatory means, subject to anti-discrimination, zoning, and other laws and regulations. For historical guidance, one might look to the evolution of laptop etiquette in coffee shops: Some venues post signs that limit one’s visit or establish no-device hours, while others rely on their employees to engage with patrons and give effect to store policies. And with camera, network, GPS, sound, and graphics running, even the most dedicated of aspiring Pokémon trainers can only catch so many creatures without a break to recharge.

Lucy Wang has broad experience representing financial institutions and high-tech companies in complex and cross-border disputes, and her practice focuses on securities and regulatory actions as well as a range of intellectual property and commercial litigation.