Cola is on a mission to reinvent messaging and simplify the texting process. Its special sauce is the use of “bubbles” within a single message to eliminate what has been described as “text-a-thons.” After launching in March, the company is ready to take its next step: unveiling a developer platform that lets anyone create their own bubbles. 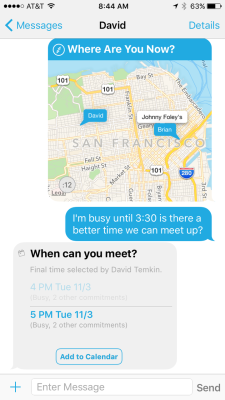 Above: Message threads in Cola.

The Cola Bubble Development Kit, or BDK for short, is part of the company’s plan to create a messaging operating system. Built on top of Facebook’s React Native Javascript framework, this kit enables developers to create any interactive bubbles they like, for live score updates or flight tracking or even for team collaboration — perhaps something similar to Slack’s Message buttons. The BDK even pairs with outside services and APIs.

Four new bubbles have already been built with this kit: UberConference has one that lets you start a conference call directly within the Cola app; FlightStats offers a bubble that displays travel updates to entire groups so you’re kept abreast of arrival times, gates, delays, and more; Giphy lets you search for the right GIF to send to your chat group; and YouTube makes it easy to search for videos without having to leave Cola.

“Cola was always envisioned as more than ‘just another messaging app’,” said company CEO David Temkin. “It’s an extensible platform that empowers developers to build their own vision for the future of messaging.”

This amounts to giving companies the ability to build tools that meet with their team’s needs. Think of it like Google’s App Engine, but specifically around messaging. Teams that want to customize their experience can now build their own. The problem is getting them to use Cola while Facebook Messenger and WhatsApp continue to dominate the messaging space. With the scalability of Messenger, it’s perhaps only a matter of time before that service enables more customization, especially with its more than 1 billion monthly active users.

Cola said that each of its bubbles runs in a “sandboxed, secure container that’s built on Facebook’s React Native engine.” Currently, there are “thousands of developers signed up” on the company’s platform, and there will likely be a slew of new bubbles added shortly.

The company explained that since its bubbles are written in Javascript, developers will need to use its “Bubbler” packaging tool on a Mac. From there, copy the output to Cola on an iPhone, either using a WebDAV or by email. Bubbles will then be listed in the app’s bubble picker, along with all the others. Any edits to bubbles can be made using a text editor. Final versions will be distributed by Cola directly.

The launch of a Cola developer kit comes as the company faces a lawsuit brought by former cofounder Marc Canter, who has alleged that he was illegally ousted and cites fraud, sexual harassment, and wrongful termination. Temkin declined to go into detail, but he stated that Canter had been fired from Cola in December 2015 “for cause” and that his behavior was “inappropriate and did not reflect well on him or on our company.” He added, “Unfortunately, some partings are not amicable. Marc responded with a frivolous lawsuit based on unmerited accusations, and we are responding in court to show that Cola acted appropriately in firing Marc.”

The case, currently being heard in the Superior Court of California in San Francisco, names as plaintiffs Temkin, Cola’s chief operating officer Michael McEvoy, and AngelList founder Naval Ravikant, along with others.

Cola is available on all iOS devices, and those interested in using its BDK can sign up here.