A year ago, Facebook revealed details about its plans to use unmanned drone airships to beam the internet down to the estimated 4 billion people worldwide without it. Today, the social networking company announced that Aquila, its solar-powered craft, has completed its first full-scale test flight.

According to details, this inaugural functional check was low-altitude and the aircraft remained in the air for more than 90 minutes — 3 times longer than Facebook had originally planned. The company claimed that it verified performance in aerodynamics, batteries, control systems, and crew training. It has already planned a second test that will assess Aquila’s speed and altitude tolerance before striving to hit the goal of soaring above 60,000 feet.

Previous tests have been in the works, but only with an aircraft that’s one-fifth the size of Aquila. 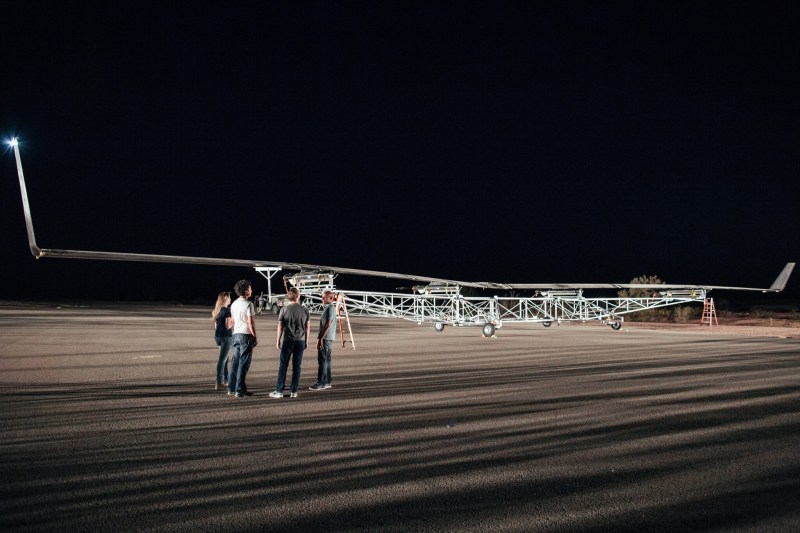 Eventually to fly in the stratosphere, above any commercial air traffic and weather patterns, Aquila has the wingspan of a Boeing 737 airplane, but weighs “hundreds of times less” due to its design and carbon-fiber frame. Powered by the sun, it’s capable of creating a 50-kilometer communications radius for up to 90 days, beaming down internet access to the people below. These signals will be received by small towers and dishes on the ground, converting it into a Wi-Fi or LTE network.

On a mission to connect the next 5 billion people, Facebook chief executive Mark Zuckerberg has started multiple initiatives to accomplish this task. Besides Aquila, it has Free Basic, formerly known as internet.org, which works with internet service providers and telecommunications companies to provide access.

If you’re interested in reading more about the lessons learned from Aquila’s successful first test flight, Facebook has listed it all out in a blog post.