The smartwatch market has hit its first bump, and it’s all Apple’s fault. Vendors shipped a total of 3.5 million smartwatches worldwide last quarter. This Q2 2016 figure is down 32 percent from the 5.1 million units shipped in Q2 2016, marking the first decline on record.

It’s important to note that smartwatches are just a subcategory of the larger wearable market. As such, these figures don’t count basic bands sold by companies like Fitbit. Apple is thus the undisputed leader, even after the losses it saw in Q2 2016, and it could easily see a return to growth with the release of Watch OS 2.0. The latest quarterly figures come from IDC, which summarized its findings in the following chart: 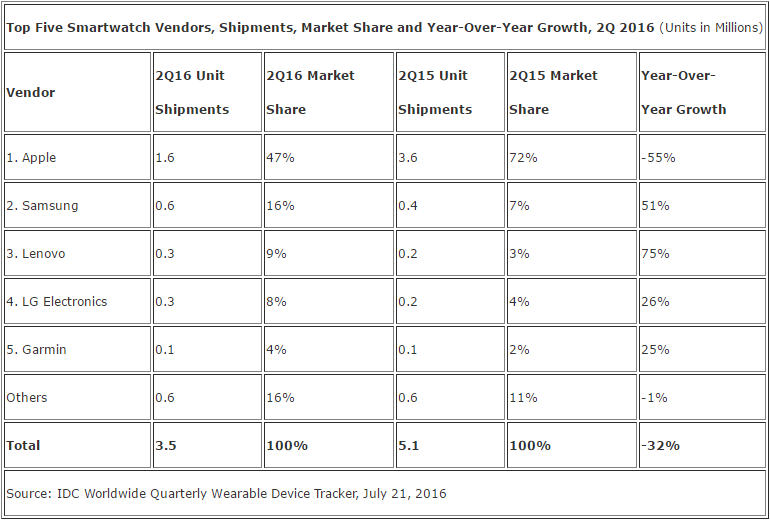 As you can see above, Apple’s market share decreased 25 percentage points (from 72 percent to 47 percent) and it shipped less than half the smartwatches (1.6 million). But the company still holds almost half the market, with every other vendor shipping fewer than a million units.

Samsung gained 9 percentage points (from 7 percent to 16 percent), thanks to shipping 200,000 more units compared to the same quarter last year. IDC attributes the gain to solid distribution though American carriers. The Gear S2 lineup is Samsung’s biggest success and doesn’t appear to depend on the company’s smartphones.

Lenovo gained 6 percentage points (from 3 percent to 9 percent), shipping 100,000 more units and jumping into third place. IDC believes this is thanks to the company’s Motorola brand moving quickly into smartwatches and becoming the de facto Android Wear choice for round form factors. But this won’t last for long, and so far the market is not impressed with the Moto 360 Sport.

LG gained 4 percentage points (from 4 percent to 8 percent), also shipping 100,000 more units but slipping to fourth place. LG was the first to offer an LTE-enabled Android Wear watch, but because Android Wear 2.0 is set to launch later this year with support for LTE, the device isn’t quite all it can be.

Garmin gained 2 percentage points (from 2 percent to 4 percent), despite flat shipments. Its Connect IQ-enabled devices remain niche, as they mainly only target athletes.

The smartwatch space is still a very young market, but a decline so early is a stark reminder that there simply isn’t as much enthusiasm for these devices as for other gadgets. Smartphones are, of course, a unique breed, but even tablets performed better than this. Over the next few quarters, many vendors will need to figure out if they really want to keep selling these miniature devices.