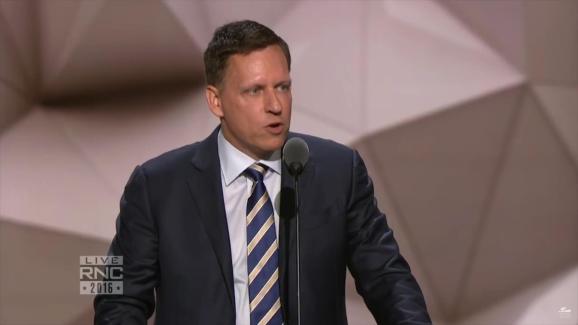 Peter Thiel speaks at the Republican National Convention in Cleveland on July 21, 2016.

Today Peter Thiel — the PayPal cofounder, Silicon Valley investor, and Facebook board member who may be best known as the man who financed Hulk Hogan’s legal assault on Gawker — is speaking at the Republican National Convention in Cleveland to warm up the crowd before real estate executive and presidential candidate Donald Trump gives his speech.

Thiel, a Trump delegate, is making his RNC appearance today, as Facebook PR has emphasized to reporters, in a “personal capacity.” But today’s appearance will likely help Thiel in a professional capacity, by attracting the attention of certain types of current and future entrepreneurs and by helping him distinguish himself from other investors even further.

Trump, who is 70, spends much of his time in New York. Thiel, 48, spent some of his childhood in Cleveland, coincidentally, but calls the Bay Area home. (Thiel is currently selling his San Francisco mansion; it’s not too late for Trump to buy it.) As the winner of the Republican nomination, Trump will be getting classified intelligence briefings. Thiel cofounded Palantir, which has done work for the U.S. Department of Defense, Department of Homeland Security, and Department of Justice.

But both men are billionaires who have steadily multiplied their riches, and they both have taken out their frustration on the press. Now Thiel is taking a step outside his Silicon Valley comfort zone and onto the national stage.

“Good evening. I’m Peter Thiel,” he began. “I build companies, and I support people who are building new things, from social networks to rocket ships. I’m not a politician. But neither is Donald Trump. He is a builder. And it’s time to rebuild America.”

He kept his speech short. And, as expected, he announced before the live audience of Republicans that he is indeed gay — but not without also pointing out his party and national identity.

Thiel also took some time out to share his perspective on the government, from his seat in the Silicon Valley technology world.

“We don’t accept incompetence in Silicon Valley, and we must not accept it from our government,” he said. The context he provided was technological follies like government software that often doesn’t work, which he called “a staggering decline for the country that completed the Manhattan Project.”

Rather than spend too much time talking up Silicon Valley’s current capabilities, Thiel expanded the focus to the nation in general, and he set it up by taking a swipe at the Democratic presidential candidate.

“We don’t need to see Hillary Clinton’s deleted emails. Her incompetence is in plain sight. She pushed for a war in Libya, and today it’s a training ground for ISIS. On this most important issue, Donald Trump is right, it’s time to end the era of stupid wars and rebuild our country,” he said.

Thiel’s complete remarks are below:

Good evening. I’m Peter Thiel. I build companies, and I support people who are building new things, from social networks to rocket ships. I’m not a politician. But neither is Donald Trump. He is a builder. And it’s time to rebuild America.

Where I work in Silicon Valley, it’s hard to see where America has gone wrong. My industry has made a lot of progress in computers, and in software, and of course, it’s made a lot of money. But Silicon Valley is a small place. Drive out to Sacramento or even across the bridge to Oakland, and you won’t see the same prosperity. That’s just how small it is. Across the country, wages are flat. Americans get paid less today than 10 years ago, but health care and college tuition cost more every year. Meanwhile, Wall Street bankers inflate bubbles in everything, from government bonds to Hillary Clinton’s speaking fees.

Our economy is broken. If you’re watching me right now, you understand this better than any politician in Washington D.C.

And you know, this isn’t the dream we looked forward to. Back when my parents came to America, looking for that dream, they found it right here in Cleveland. They brought me here as a 1-year-old, and this is where I became an American. Opportunity was everywhere. My dad studied engineering at Case Western Reserve University, just down the road from where we are now. Because in 1968, the world’s high-tech capital wasn’t just one city. All of America was high tech. It’s hard to remember this, but our government was once high tech, too. When I moved to Cleveland, defense research was laying the foundations for the Internet.

The Apollo program was just about to put a man on the moon. And it was Neal Armstrong, from right here in Ohio. The future felt limitless. But today, our government is broken. Our nuclear bases still use floppy disks. Our newest fighter jets can’t even fly in the rain.

And it would be kind to say the government’s software works poorly, because much of the time, it doesn’t even work at all. That is a staggering decline for the country that completed the Manhattan Project. We don’t accept incompetence in Silicon Valley, and we must not accept it from our government.

And instead of going to Mars, we have invaded the Middle East. We don’t need to see Hillary Clinton’s deleted emails. Her incompetence is in plain sight. She pushed for a war in Libya, and today it’s a training ground for ISIS. On this most important issue, Donald Trump is right, it’s time to end the era of stupid wars and rebuild our country.

When I was a kid, the great debate was about how to defeat the Soviet Union, and we won. Now we are told that the great debate is about who gets to use which bathroom. This is a distraction from our real problems. Who cares!

I don’t pretend to agree with every plank in our party’s platform, but fake culture wars only distract us from our economic decline, and nobody in this race is being honest about it, except Donald Trump.

While it is fitting to talk about who we are, today it’s even more important to remember where we came from. For me, that is Cleveland, and the bright future it promised.

When Donald Trump asked us to make America great again, he is not suggesting a return to the past. He’s running to lead us back to that bright future.

Tonight I urge all of my fellow Americans to stand up and vote for Donald Trump.

Thank you. Thank you very much. Thanks.