Google today announced Google Play store improvements focused on the size of updates. A new delta algorithm, bsdiff, has been rolled out to further reduce patches for apps and games.

Mobile users are sensitive to the amount of data they use, especially when Wi-Fi is not available. Google is thus trying to reduce the data required for Google Play app installs and updates, as well as make data cost clearer to users.

Google says that for approximately 98 percent of app updates from the Play Store, only deltas to APK files (the changes between the current version and the new versions) are downloaded and merged with the existing files, reducing the size of updates and thus how much data is downloaded. The new algorithm produces more efficient deltas of native libraries by taking advantage of the specific ways in which compiled native code changes between versions.

Bsdiff reduces patches “by up to 50 percent or more” compared to the previous algorithm. Yes, that estimate is nonsensical. In short, sometimes the algorithm is just a little better than its predecessor, and sometimes it’s a lot better:

The algorithm is also now being used on APK Expansion Files, which allows you to include additional large files up to 2GB in size with your app or game. On average, this reduces the download size of initial installs by 12 percent and updates by 65 percent.

Lastly, Google has clarified information about data used and download sizes in the Play store: 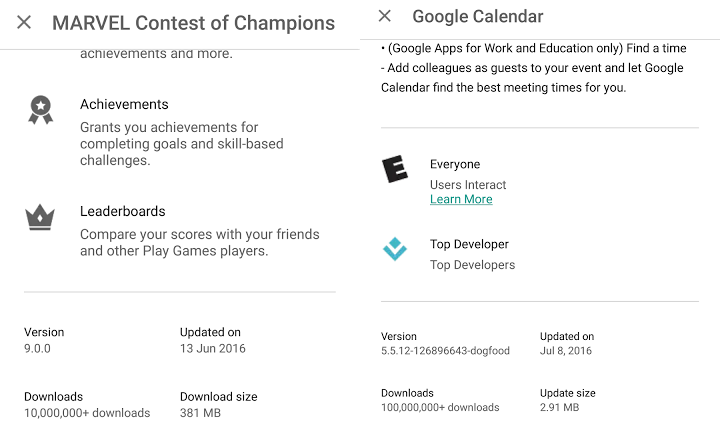 Google Play will now show actual download sizes, not APK file sizes. If you already have an app, you will only see the update size.

In May, at the company’s I/O 2016 developer conference, Google unveiled a slew of new developer features for Google Play. Today’s improvement is one both users and developers are sure to benefit from immediately.