Mike Donais knows a thing or two about card games. After all, he worked on the granddaddy of them all — Magic: The Gathering. He’s also done a turn on Dungeons & Dragons and board games. This makes him a natural for his role as the senior producer of Hearthstone: Heroes of Warcraft, Blizzard Entertainment’s market-leading digital card game.

GamesBeat interviews Donais at an event at Blizzard’s headquarters in Irvine, California, before the launch of the Whispers of the Old Gods expansion. As he talked, the veteran talked about topics light and heavy — selecting expansion themes, making Hearthstone cards, how his long background with fantasy games help shape his approach to game design, and how the dark lore of Lovecraft is such a great fit for gaming. 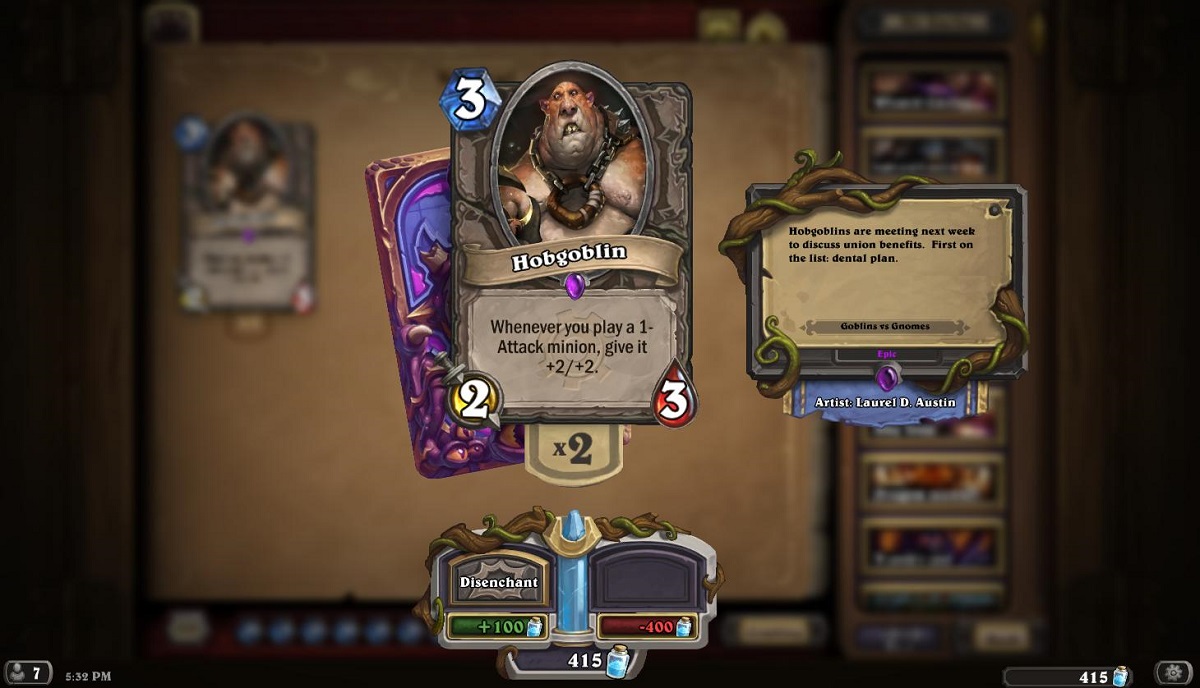 Above: The Hobgoblin buffs cards with 1 attack in Hearthstone: Heroes of Warcraft,

GamesBeat: Which of the cards ineligible for Standard will you miss the most?

Mike Donais: I’ve thought about this. There’s a lot I’m going to miss. Obvious ones are like Sludge Belcher and Healbot. But my personal favorites, since I played so many games, are more like Webspinner and Unstable Portal. Once you play like 50 games a day, you really want to have variety. I’ll miss those cards.

GamesBeat: I’m going to miss Hobgoblin the most. I love the Hobgoblin.

Donais: Yeah, I’ve played some Hobgoblin. I like Hobgoblin, too. Sometimes you get certain build-around cards that you won’t be able to play again. Some other cards were build-around, but they never quite made the perfect decks. There weren’t enough cards. Like Feign Death is a Hunter card that’s like, wow, I can’t wait to make a good Feign Death deck, but you need one or two more cards to go with it and support that theme. But then I realized, oh, I can play that still. I just have to play it in Wild. And that’s fine. When the next Feign Death card comes out, I’ll build the deck in Wild and have plenty of fun there.

GamesBeat: I know that sometimes your expansions are in the works for a long time, and they come from ideas that have been around—senior game producer Yong Woo said that when you were coming up with the first expansion, the Old Gods were mentioned. But how long has this one officially been in development?

Donais: They mentioned that years ago. One of the ideas was Old Gods. More specifically, this expansion has been about a year since we started the design concepts. We would pick a few different ideas and write a couple pages on each idea and see which one we liked the best. Then we’d go with that and brainstorm. Mechanically, how’s that going to work? Make a big list of words that epitomized it flavor-wise. Either Old Gods or Cthulhu-esque words. We look at the WoW lore and see if there’s stuff there. We put it all together so we have a good understanding before we start deciding specific cards. Here’s 20 different mechanical identities a set could have. Which one or two or three do we like the best? That’s how we got the idea of worshippers and followers. Those were buzzwords in our initial lists. We wanted to know how to work that into the set. That’s part of how we came up with C’thun. It’s nice the way that feels, like something you’d see in an Old Gods set.

GamesBeat: I’m probably the type of Hearthstone player you’re going for. Not the guy who played World of Warcraft for years, but someone who likes card games, hasn’t played card games a long time, and then totally snapped and spent a lot of money on Hearthstone. But what’s amazing about this is how much I’ve gone back to learn lore since Warcraft III, because I didn’t play WoW at all. It’s fascinating. Approaching the Old Gods, the one thing I wanted to know was, did your Old Gods all have roots just in something like the Cthulhu Mythos before you brought it into WoW, or did some of it come from something like Dungeons & Dragons as well?

Donais: I’m a big fan of that kind of lore, Warcraft history and D&D as well. I played and worked on D&D for many years.

GamesBeat: That’s why I asked. [Laughs]

Donais: That whole dark fantasy all sort of comes together and they overlap a lot. We thought about that in our brainstorms from different directions. We didn’t copy any specific one, but we tried to grasp the flavor of all of them. By playing those games and, say, the Cthulhu board games, and different zones in WoW, it got us on the right track lore-wise. It all built up to how we ended up where we are.

GamesBeat: Whether it comes from Lovecraft or wherever else, what is it that makes that attractive to you as a game designer?

Donais: One big part of it is the difference. We had some fun light stuff with League of Explorers. This lets us explore a different direction. It’s fun to design with some specific direction in mind. It’s easier to design when I have a direction instead of just “design whatever you want.” This gave us a solid design direction with a lot of flavor and a lot of mechanics. It felt open to anything. What’s the craziest idea? When we designed the Old Gods, we were like, what’s the craziest thing we can possibly do? These guys are the most powerful thing in WoW. They cost 10 mana and they’re even more powerful than 10 mana. C’thun, normally we wouldn’t make a guy who’s 20/20 and fires 20 missiles, but because of all the buildup involved we can do that and feel a bit better about it. It’s cool to be able to make things that are more powerful than you could ever imagine. The other part about the set that I like is the corruption theme. That’s been working out well. It has existing cards that you recognize—having cards you recognize is important, because a lot of people don’t recognize the Old Gods themselves. What are all these apostrophes and funny letters in jumbled order? I don’t understand those words. Oh, but I understand these other cards that are from the core Hearthstone set, like Healbot or whatever. Doomsayer. That’s helped balance the set out.

GamesBeat: Were you disappointed that The Mistcaller — a Shaman legendary from The Grand Tournament set — didn’t get more play?

Donais: We just try to put a bunch of tools out there when we design sets. The tools should be interesting in their own right. But we don’t always know exactly which ones are going to happen to be the ones that are most played. Shaman had been in a bit of a lull right around when Mistcaller came out, but I think it’s been picking up and getting popular again. We’re going to have a bunch of cool new Shaman cards in this set, which I think will help. It’ll be on the upswing again. 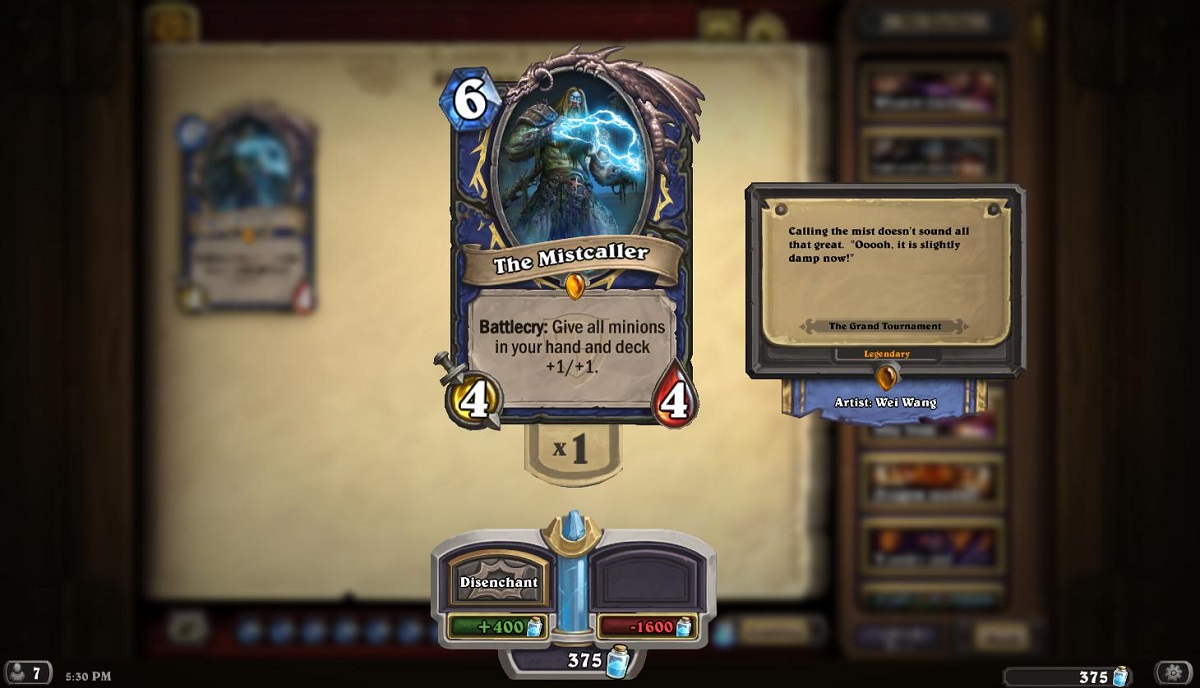 Above: The Mistcaller buffs every card in your draw pile and hand — it sounds powerful, it hasn’t seen regular play.

GamesBeat: When you’re making these themes and cards, how difficult is it to make them and then say, OK, now what do we do to counter that?

Donais: That is something that’s part of design. A lot of people think you need specific answers that call out the card name. I like having that sometimes, some of those, so that players who don’t know exactly how to answer a situation can look for that. But I think it’s usually more subtle than that. Oftentimes, if the deck is a rush deck, then the answer is an area-of-effect card. More AoE cards to play against rush decks. Or more one-mana cards to play against rush decks. Those are the real answers. The answers aren’t, if there’s a bunch of small demons in play, kill them. It takes people a while to figure that out, but I think it’s a good experience, a good learning process for them.

GamesBeat: I assume the design team approaches it as, it’s not just cards, it’s puzzles.

Donais: We like people to discover things. We leave a lot of things open. We don’t know what the best C’thun deck is going to be. We don’t know what class it’ll be played in. We just gave players a bunch of tools. Here’s 32 exciting C’thun cards. Figure it out. Every class is going to play differently because of their class cards and because some of the C’thun cards are specific to a class. But we don’t know if it’ll be fast or slow or whatever. We leave that open and let them decide.