I don’t know about you, but I’m going to avoid visiting Brock in Suplex City

GamesBeat has partnered with iSpot.tv, which measures TV advertising in real-time, to bring you a monthly report on how gaming brands are spending their ad dollars and which are generating the most digital response. Below are the top five most-engaging gaming industry brands over the last 30 days. 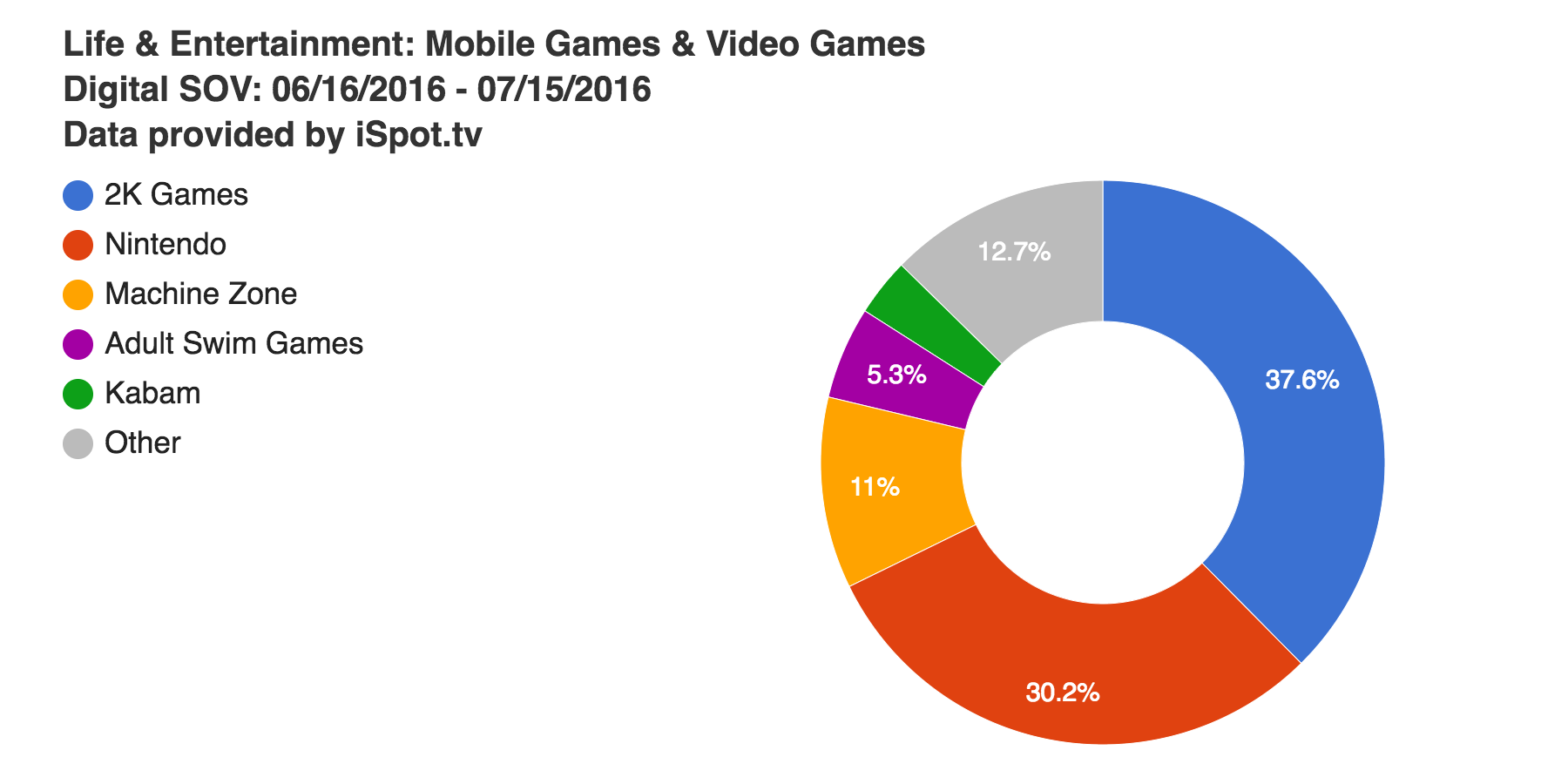 The gaming industry continues its slow summer spend on TV, but that sure hasn’t hurt the digital response. While only spending $21.5 million on TV ads as an industry, the sector has generated over 1.4 billion impressions on TV, resulting in huge social response: over 58 million online views, 110,000 social actions, and nearly 110,000 searches. Chock full of new faces, this period’s leaderboard crowned 2K Games as the most engaging video game brand on TV.

Accounting for 37.6 percent of the industry’s digital response, 2K Games has firmly staked its claim to the throne for this period. On the backs of four ads, 2K spent just under $1.3 million on only 31 airings, resulting in 29 million impressions. Focusing most of the budget on NBA 2K17, it was actually a WWE 2K17 ad that generated the most buzz. “Welcome Back to Suplex City” featuring Brock Lesnar may have only ran eight times, but it got 3.3 million online views and generated over 30,000 social actions.

Nintendo closed out this period in second place, and without any help from surprise mobile-sensation Pokémon Go. The company spent just over $1.3 million running nine spots 1,110 times, propelling the brand to bring home over 30 percent of the industry’s digital response. In total, Nintendo generated over 108 million impressions on TV and earned over 3.6 million online views, 11,700 searches, and 3,400 social actions. Its most engaging ad, “Teams,” is for Mario & Sonic at the Rio 2016 Olympic Games. Over 1.1 million of the brand’s online views were tied to this commercial.

Machine Zone once again graces our leaderboard, this time finishing in third place with an estimated national TV spend just under $7 million. Running five spots 3,884 times, the brand’s ads were so well received that they were searched for over 27,000 times online during this period alone. Machine Zone’s most engaging spot, “Cafe War,” alone generated over 28 million impressions, leading to another 4.6 million views online. In total, Machine Zone generated over 389 million impressions on TV during this period.

Debuting for the first time on the leaderboard, Adult Swim Games joined the ranks of the most engaging gaming brands on TV. Running two ads over 60 times, all of these airings ran on the brand’s parent network, Adult Swim. The brand’s commercials focused on two franchises, Pocket Mortys and Wasted, though the former received the bulk of the push. This is likely in support of the season premiere of season 3 of Rick & Morty, which is rumored to be coming soon. In total, Adult Swim Games ads generated over 1,500 social actions. The brand’s most engaging ad, “Tournaments,” promoting the Rick & Morty-themed game, generated more than over 90 percent of those actions.

After selling off much of its inventory to Gaea Mobile in January, Kabam is not only back on TV, but making noise. Running four ads over 11,000 times, Kabam’s return was warmly welcomed, receiving nearly 14,000 social actions and over 550,000 online views. The spot that received the most attention, “The Cosmic Civil War,” supports Marvel’s Contest of Champions, one of the few titles the brand held on to amid the sell off. This ad alone generated over 103.7 million impressions, with an average view rate of 81.62 percent.