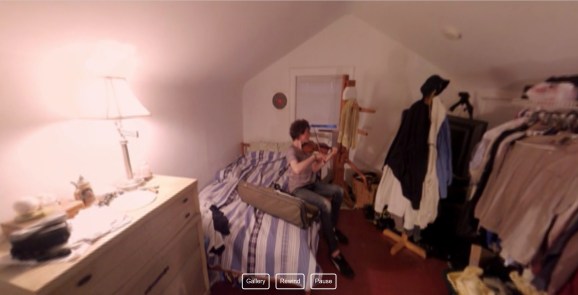 The Omnitone spatial audio is being used to decode audio for a 360-degree video.

Google today announced that it has open-sourced Omnitone, a piece of software that developers can use to incorporate spatial audio into websites. The software is available now on GitHub under an Apache license.

To give people a sense of what’s possible, Google has also posted two videos featuring spatial audio with Omnitone.

The demos depict musicians performing at multiple angles. If your headphones are plugged in, you can rotate what you’re seeing onscreen and hear different parts of the audio more loudly or more softly, depending on your position relative to the source of the audio in the video. This approach depends on eight virtual speakers, Hongchan Choi and Raymond Toy from the Google Chrome team wrote in a blog post.

“This binaurally-rendered audio can convey a sense of space when it is heard through headphones,” Choi and Toy wrote.

Written entirely in JavaScript, Omnitone can decode audio for delivery on desktop, but it will also work with a mobile device or a virtual reality headset. (At the moment, though, it’s not yet working on the mobile web.) It follows Google’s spatial audio specification, and it can work in multiple browsers. (For example, Edge and Safari can use it, and Chrome can, too.)

Strategically open-sourcing this project is a meaningful step for Google. The company has its foundations in the web, so it’s natural for it to ensure that virtual reality media on the web — and 360-degree content, in general — is rich and engaging. Google has been supporting the WebVR project, and at the same time it’s going beyond the Cardboard headset and expanding the VR ecosystem with the Daydream platform.

For more on spatial audio, Google has a good overview here.