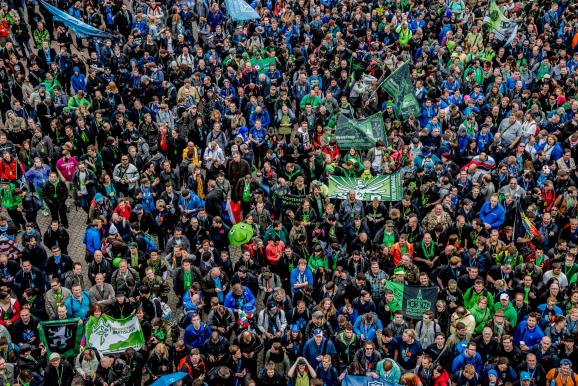 Ingress players gather together for a real-world event.

Pokémon Go is so popular in Japan that some players are also diving into the studio’s other game as well.

Ingress, the GPS-powered location-based predecessor to Pokémon Go from developer Niantic, is the No. 6 most downloaded game in Japan, according to market-intelligence firm Sensor Tower. The game entered the top 10 in that country over the weekend following the release of the Google maps-enabled pocket-monster-catching app late last week. This resurgence for Ingress is unique to Japan, as the game is not in the top 50 in most other countries. Mobile gaming is a $36.9 billion business, and Pokémon Go is capturing a huge piece of that as No. 1 on both the download and grossing charts across iOS and Android in more than 30 regions around the world.

Ingress has players walking around their neighborhoods, towns, and cities looking for special locations and items scattered around their environment. Ingress uses your smartphone’s GPS to track your position, and then it lets you know if you’re close to special portals that you can interact with and claim for one of three teams.

Niantic took Ingress and used that as the backbone for Pokémon Go, which puts special PokéStops and gyms at many of the same locations that feature portals in Ingress.

While Pokémon Go instantly grew into a cultural phenomenon, however, most people around the world have ignored Nantic’s work with Ingress. But that’s not the case in Japan, where players have taken a renewed interest in the game.

This excitement around Ingress isn’t new in Japan. The game had a significant following in the country when it launched in 2012. That led to tea company Ito En building a special Ingress-themed vending machine that is still operational in Tokyo.

Ingress’s return in Japan suggests that some players are downloading it alongside Pokémon Go to kill two location-based Pidgey’s with one Geodude.