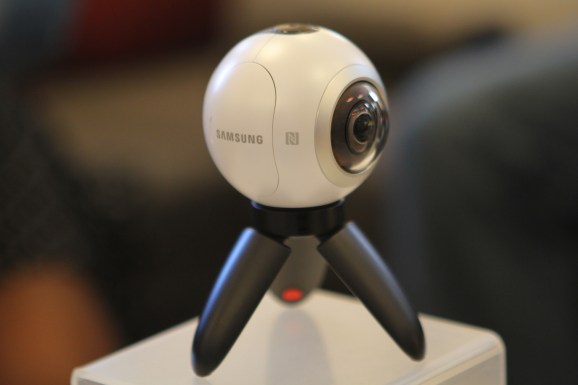 Samsung is bringing its Gear 360 virtual reality camera to this year’s Lollapalooza festival. Attendees will be able to purchase one of the limited number of 360-degree recording devices the company will have on hand for $350. Samsung is hoping that this will encourage the creation of videos that showcase how powerful the Gear 360 is in generating consumer-grade VR movies.

“Lollapalooza is an excellent opportunity for us to connect fans to their favorite music using our mobile and VR technology,” Marc Mathieu, chief marketing officer at Samsung Electronics America, said in a statement. “We are thrilled to partner with the festival in this unique way, delivering new possibilities in content creation and content consumption through Samsung products, and allowing fans to have a deeper connection to our brand.”

The VR space is heating up, and Samsung needs to attract influencers and show them that it has ways for them to not only consume content, but also create it. The Gear 360 camera faces stiff competition from the likes of the Ricoh Theta, GoPro, Bublcam, Kodak, and many others.

This is the second time that Samsung has made its new VR camera available in the U.S. In June, the company launched the device in the country, but only for those attending the VidCon event in Anaheim, Calif. Although the Gear 360 is still not available for purchase in stores within the U.S., that hasn’t stopped people from purchasing it through other avenues.

Unveiled during this year’s Mobile World Congress, the Samsung Gear 360 is a lightweight camera that enables anyone to produce virtual reality content. Equipped with two f/2.0 fish-eye lenses that take 195-degree photos and videos, it can capture images of up to 30 megapixels and record footage in near-4K quality and at 3840×1920 resolution. It’s able to hold up to 128GB of content stored on a microSD card, giving you the equivalent of 7 hours of video. The Gear 360 also has a 1,360 mAh lithium-ion battery that’s been tested to last up to two hours.