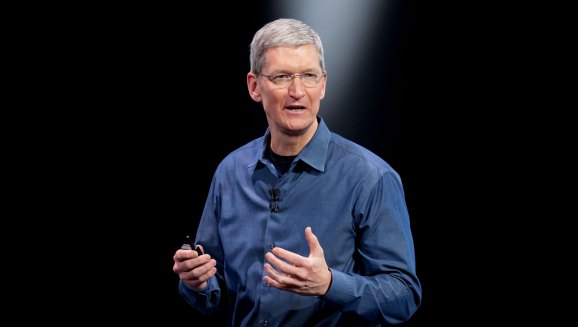 Today, on Apple’s quarterly earnings call with financial analysts, Apple CEO Tim Cook spent some time talking up augmented reality (AR). Apple doesn’t have any existing hardware or software for that technology at the moment, so it was surprising to hear Cook talk about the subject.

He brought it up in the context of the Pokémon Go mobile game (or, as he called it, “PokéMan“), in response to a question about the business value of Apple Pay. In case you’ve been living under a giant Charmander, and you haven’t had the pleasure of playing it, Pokémon Go is different from many mobile games because it superimposes Pokémon creatures on top of whatever is in front of you, using the camera on your mobile device. So it looks like the characters exist in real life, and you have to catch them. This is an implementation of AR, and you can approve mobile payments for things like PokéCoins with Apple Pay.

“In terms of AR and the Pokémon phenomenon, it’s incredible what has happened there,” Cook said. I think it’s a testament to what happens with innovative apps and the whole ecosystem, and the power of a developer being able to press a button, so to speak, and offer their product around the world. And this certain developer has elected not to go worldwide yet because of the pressure on their servers, etc., because of the demand. But I am sure that they will over time.”

He continued: “It also does show, as you point out, that AR can be really great, and we’re — we have been and continue to invest a lot in this. We are high on AR for the long run. We think there’s great things for customers and a great commercial opportunity, and so we’re investing. And the No. 1 thing is to make sure our products work well with other developers’ kinds of products, like Pokémon, and so that’s the reason you see so many iPhones out in the wild right now, chasing Pokémons.”

He went on to address a question about whether computing will shift to AR in the long term.

“I know there’s people that want to call it a new computer platform, and we’ll see,” Cook said. “I think there’s a tendency in this industry to call everything new the next computer platform. However, that said, I think AR can be huge. So we’ll see whether it’s the next platform, but, regardless, it will be huge.”

While that’s sufficiently generic and applicable across the technology industry, it’s also a statement that suggests Apple won’t be sitting out the AR trend. And that makes sense, given what Apple’s competitors have done — Microsoft with the HoloLens headset and Google with the Tango platform, which was recently deployed in Lenovo’s Phab2 Pro phablet.

Sure enough, Apple has been spending more money on research and development (R&D). As my colleague Chris O’Brien pointed out on Twitter today, Apple spent 27.8 percent more on R&D in the first nine months of its 2016 fiscal year than it did during the same period in the 2015 fiscal year.

“There’s quite a bit of investment in there for products and services that are not currently shipping, or derivations of what is currently shipping,” Cook told analysts today. That broad statement could be referring to the much-hyped but never confirmed Apple car project, but it could also speak for some sort of AR technology.

What’s more, Apple has made acquisitions in the field of AR: Last year there was Metaio, and this year, Flyby Media. The Financial Times, in breaking the news about the Flyby deal, also reported that Apple has hundreds of people working on virtual reality (VR).

Today’s remarks do not guarantee that Apple will unveil any AR functionality. But now we have proof from the top person at Apple that the company is spending money on it.