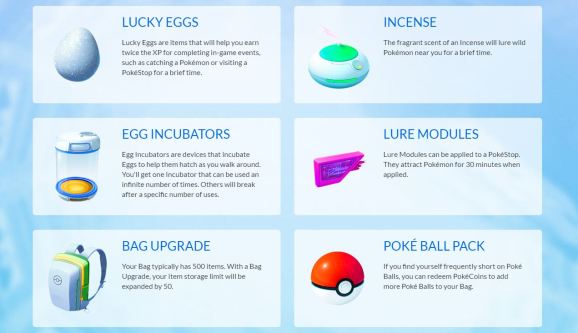 Items you can purchase with digital currency.

My name is Jeff, and I’ve been monetized.

I’ve spent around $65 in Pokémon Go to make my quest to catch ’em all a little easier. I’ve used that money on a variety of items, and I have some regrets about my personal financial-management skills. But I’ve also learned something about the game — and a little bit about myself — by emptying my pockets to developer Niantic’s Google Maps-powered monster-catching game. And I want to share that with you.

Pokémon Go is making money from more folks than just me. It is the top-grossing game right now in the $36.9 billion mobile gaming market. To put that in raw revenues, it’s making around $1.6 million every day just from iPhone owners in the United States. Hell, even pop musician John Mayer can’t stop spending money on it.

But while I will never spend as much on Pokémon Go as some whales do — I didn’t write “Waiting on the World to Change,” after all — I still have some insights into this whole monetization thing.

You don’t need to spend

Pokémon Go is making a lot of money, but — as with most free-to-play games — you shouldn’t need to spend money to have a good time. You can speed up the leveling process and maybe catch a few extra pocket monsters slightly faster than you normally would, but spending $1 to $100 isn’t going to turn you into the top trainer in your neighborhood. If you are only thinking of spending around $10, I would suggest you just hold onto that money, unless you’re planning on buying a couple of very specific items.

The problem is that spending more money is not going to lead to your having a better time. Having 200 Pokéballs in your bag to catch 190 Pidgeys and a handful of other relatively common creatures will only lead to buyer’s remorse.

Instead of putting $10 into the game, spend that money on a bus ride or a Lyft to your closest major park or shopping center. Walk around the PokéStops and get items that way, while enjoying the lures that others are putting down.

That was a lot more fun for me than anything I did with the lures, incense, and lucky eggs I spent too much of my money on.

If you do spend money, have a plan

Spending money isn’t always stupid in Pokémon Go. But don’t just put cash into the game because you’re bored. You need to have a strategy to maximize your return on investment. Now, I’m no John Pokémon Morgan, but I have two tips for anyone eyeing those in-app purchases.

If your goal is to find rare Pokémon to build out your team, you should avoid incense pods and lures. Instead, you should travel to PokéStops to find as many regular eggs as possible. You should then spend money on those three-use egg incubators. That way, you’re not running out of room for new eggs you might find (you can only carry nine), and every step you take goes toward hatching all the eggs you are holding.

Even if you only get one rare and powerful Pokémon for every egg incubator you buy, that’s still better than incense — which mostly attracts the same lame Rattatas that you always find.

Lucky eggs can be worth buying, in certain situations. For example, if you have a Pokémon bag full of Pidgeys, you can turn on a lucky egg — which doubles your experience points — while you evolve each of those Pidgeys from the comfort of your couch. Bag management is a slow process, and a lucky egg only lasts a half hour. But, if you rush, you could clear out your bag while getting 1,000 XP for every Pidgey you evolve into a Pidgeotto. That’s a fast way to power level because it concentrates a ton of XP grinding into a small time frame. Just make sure you transfer your Pidgeottos to the professor right after evolving them, because it requires 50 Pidgey candies to turn a Pidgeotto into Pidgeot, where you’ll get the same XP for evolving a Pidgey into Pidgeotto for only 12 candies. That’s some tasty ROI, right there!

I find this more rewarding than turning on a lucky egg for Pokémon hunting or gym battles, because bag management is more predictable. You can see exactly how many monsters you have — and you’re going to need to clean out your bag every once in a while, anyhow.

Since it launched earlier this month, I’ve only grown more attached to Pokémon Go. The more I learn about the way it works, the more I want to engage with it. But I’ve also learned the same lesson I almost always learn when I spend money on in-app purchases: It doesn’t make me happy.

Pokémon Go is a blast. Walking makes me feel wonderful. Catching a Flareon, hatching a Magmar, and evolving a Jolteon have all provided me with genuine thrills.

Spending money, however, has not really provided me with the same level of excitement, and I’m gonna try to not do it much in the future. I’ll probably still fall down that cave once or twice more, but that’s it.