It says something when a site like Imgur, an image-sharing site that wasn’t created for gamers, is now overrun with gamers. Based on a survey of Imgur’s “geek culture,” the company found that 91 percent of its users are gamers.

On top of that, 63 percent of gamers on Imgur play at least once per day, and 88 percent play a few times a week. Over percent of the gamers on Imgur spend over $100 per year on video games. 52 percent would rather sacrifice one meal a day for a month rather than not be able to play their favorite game ever again.

Imgur has become a cross section of the geek internet, with 150 million monthly active users. It is one of the top 50 largest web sites in the world, and it’s just a little smaller than Twitter as a social platform. It’s a place where people can “surface really entertaining moments,” said Steve Patrizi, vice president of marketing at Imgur, in an interview with GamesBeat. 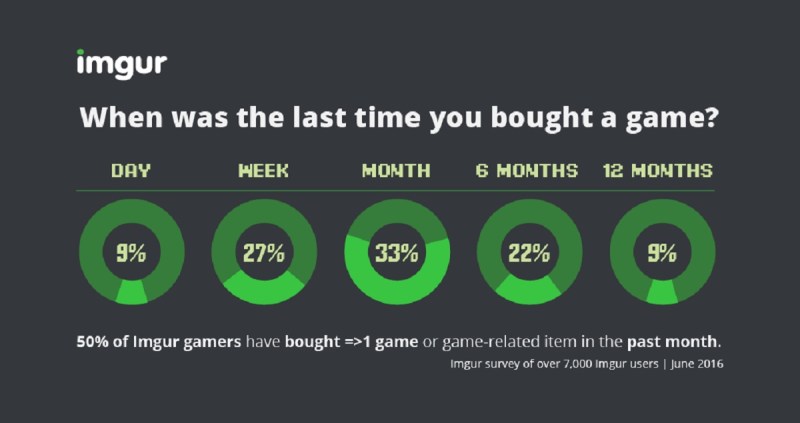 Above: More than half of Imgur gamers have bought a game in the last month.

What does it mean? “Gaming is mainstream,” Patrizi said. “We don’t position ourselves as a hardcore gaming site. There aren’t a lot of non-gaming destinations where you have a high concentration of hardcore gamers. We are not a site about gaming. But the gamers are here.”

Imgur has the highest composition of millennial men compared to Facebook, Twitter, Reddit and Twitch (based on a study by comScore in  December 2015). One in two Imgur gamers say they are “going to binge on video games this summer.” 44 percent said they love gaming “more than I do most things in life.”

When a new game like Rise of the Tomb Raider comes out, players like to take screen shots and show off how good the graphics look.

“There’s funny Grand Theft Auto scenes where a tractor-trailer goes off a cliff and lands perfectly in a parking spot,” Patrizi said.

“It’s hardcore, on the PC side of the spectrum,” Patrizi said. “Pokémon Go is certainly a big topic.”

Imgur was started by college student Alan Schaaf in 2009 as a simple image-hosting solution. It took off and evolved into a visual community. Now its focus is on geek culture, with a permanent topic area on gaming.

The survey was conducted in June and it included more than 7,000 users.