The Xbox One and PlayStation 4 consoles did not launch with great controllers in terms of build quality. In hindsight, while both devices had their upsides, they feel cheap. Microsoft and Sony have since revised their gamepads, and now the Xbox One is on its third standard design — and it’s the best one yet.

Microsoft announced the Xbox One S controller at the Electronic Entertainment Expo tradeshow in Los Angeles last month, and now the company has finally sent me one. Not only is this the sturdier, feature-packed S that goes on sale August 2 for $60, but it’s also one of the first pieces of hardware to come out of the new Xbox Design Lab custom paint-job site. You can make your own controller right now starting at $80, and it’ll start shipping in September.

But should you pull the trigger? The new gamepad impressed me — and here’s why.

Third-party companies have offered customized controllers for years. Their prices start at around $120, so it’s wonderful that Microsoft has built a first-party solution for gamepad paint jobs that is only $20 more expensive than the price of a standard $60 unit.

And Xbox Design Lab produces spot-on results. The site delivered the exact controller I crafted. The blue wasn’t two shades off. It was precisely what I picked out.

Now, this means if you design something ugly, you’re going to get something ugly. But an extra $20 to get a personalized Xbox One controller is a real bargain. 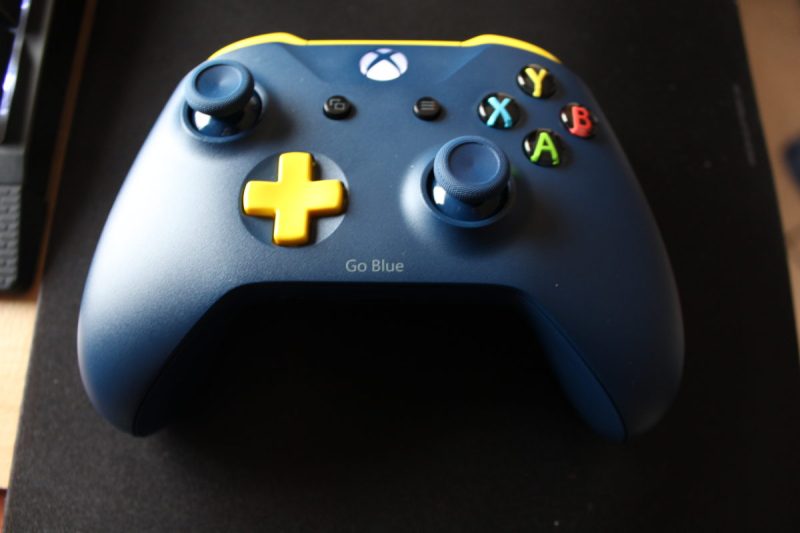 Above: That's a handsome controller.

The Xbox One S controller is another major step forward for Microsoft in terms of the quality of the parts and manufacturing processes it’s using for its products. The 2015 controller revision, which introduced the 3.5mm headphone jack, featured better buttons and more resistant control sticks. The S amps up all of this with buttons that have a premium action. This stands out with the sticks, which have a more even resistance and smoother rotation around the border of their wells.

If you’ve used an Xbox One controller for any extended period of time, you’ve likely noticed a chalky dust that builds up around the ball-bearing area of the stick. Microsoft claims to have solved this, and the analog sticks feel great because of these improvements.

Beyond the buttons and sticks, the controller uses strong and light materials. The hand grips, where you hold the pad with your inner knuckles and palms, now has a textured coating. This prevents the device from slipping whether you use a light squeeze or a death lock to hold your controller.

One of the other improvements in the One S controller is a stronger radio signal that increases the range of the connection you can have between the Xbox One, a PC, or another device and the gamepad.

Based on my testing (going in my backyard and walking away from the house until the controllers stopped working consistently), the range is about 75 percent more than the 2015 Xbox One controller. This is true for both the standard Xbox One wireless connection, which uses a dongle on PC, as well as the new Bluetooth radio.

This is one of my favorite new features. If your PC has Bluetooth compatibility, you no longer need the Xbox One Wireless Adapter to use the gamepad without a USB connection.

Bluetooth also means you can connect it to smartphones and tablets. I used it with my Nvidia Shield tablet, and the controller worked without flaw for both gamepad-capable mobile apps and PC games I streamed to my device.

Bluetooth doesn’t connect to everything

My only hangup with the Xbox One S Controller is that the Bluetooth didn’t work with the Steam Link. I would guess that Valve, which manufacturers the Steam Link, will address this soon, but — for now — I’m forced to go through a Steam Controller or the PlayStation 4’s DualShock 4 (which does work over Bluetooth) to navigate the Link.

While this was the only device I tried that doesn’t work, consider this a warning that the Bluetooth connection is not guaranteed to work on anything you may want to try it on.

The Xbox One Elite Controller is still the best gamepad I’ve ever used, but that’s $150. For $60, you can’t beat the Xbox One S Controller. At this point, following all of Microsoft’s revisions, it outdoes the DualShock 4 in terms of quality. If you prefer Sony’s design, you probably shouldn’t switch. But if you are more agnostic and not looking to spend a lot of money, then the S is the controller I recommend.

Xbox Design Lab also gets my approval. For $20, I now have a connection with a controller because I created it. It is Jeffrey Grubb’s Xbox One gamepad. I’ve never had that before, and I kinda don’t want to play with anything else.

Now, if only I could get a custom Xbox One Elite Controller.

Xbox One S Controller is available August 2 for $60. You can order a custom one now starting at $80 that will ship in September. Microsoft provided GamesBeat with a Xbox Design Lab code for the purposes of this review.