Dungeons & Dragons is amid its biggest resurgence since the height of its popularity in the 1980s. It’s already offered a way for players to leave the real tabletop for the virtual world with Fantasy Grounds last year — and now fans have a new way to play the role-playing game with their friends without needing a real table. 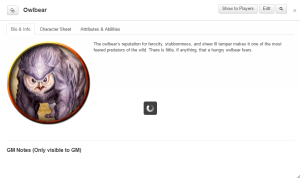 Above: How the Owl Bear looks inside Roll20.

Roll20 announced today that it’s offering Wizard of the Coast’s beloved RPG (as the tabletop gaming site En World reported) as one of the products in its gaming-over-the-internet community. Roll20’s approach differs from Fantasy Grounds in that you can play inside your browser, not inside a client. The first adventure, the Lost Mines of Phandelver, is available now for $20 (this is the module that came with the Starter Set in 2014).

You can also preorder D&D‘s next story arc, Storm King’s Thunder, for $50.

“We’re excited to begin our official relationship with Roll20,” D&D spokesperson Greg Tito said in an email with GamesBeat. “Dungeons & Dragons believes giving players more choice is a good thing, and we’re pleased to add Roll20 to the roster of virtual tabletops in which you can get official D&D material, joining our partners at Fantasy Grounds. We’ve been aware of the popularity of Roll20 for a long time, and it’s cool they are committed to getting more material available on the platform, including the next D&D storyline, Storm King’s Thunder, when it comes out next month.”

According to En World, an online publication that covers tabletop gaming, Roll20 has 1.6 million users and that 46 percent of them play D&D.