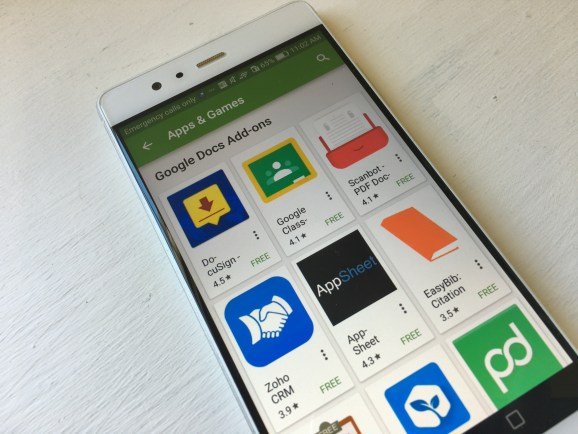 Google Docs and Sheets add-ons in the Google Play Store.

Google today announced the launch of new add-ons for the Android versions of Google Docs and Google Sheets. Those services have offered integrations with third-party tools on the web, and now a similar capability is coming to Google’s mobile operating system.

Nine add-ons are available for Android as of today: AppSheet, DocuSign, EasyBib, Google Classroom, PandaDoc, ProsperWorks CRM, Scanbot, Teacher Aide, and Zoho CRM. The DocuSign add-on, for example, lets you sign or send a file in Google Docs or Sheets through DocuSign. Generally these services are meant for a work context, but it’s possible that developers will build more consumer-oriented add-ons, too.

Microsoft has brought Office add-ins to iPad, but they’re not yet available on Android or iPhone.

Google will consider the idea of bringing Docs and Sheets add-ons to iOS “once we determine demand is high enough,” a spokesman told VentureBeat in an email.

Update at 11:30 a.m. Pacific: Changed the line about Google’s plans to introduce Docs and Sheets add-ons on iOS after getting additional clarification from Google; initially the spokesman said Google plans to bring them to iOS.