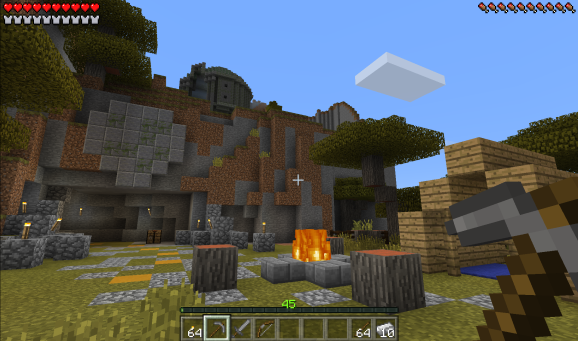 You will soon no longer need a Samsung Gear VR to enjoy a low-fidelity simulation.

Microsoft’s Windows 10 version of Minecraft is a year old today, and the company is celebrating by unleashing PC virtual reality support in the block-building phenomenon. In a blog post on Windows.com, the company revealed that Minecraft: Windows 10 Edition will work with Oculus Rift in a beta update in the “next few weeks.”

“If you already own Windows 10 Edition and an Oculus Rift, you can jump right in and start experiencing Minecraft in a whole new way,” Minecraft executive producer Jesse Merriam wrote. “To celebrate, we’re also releasing a roller coaster map, available for free to download here.”

You can get a glimpse of that roller coaster in action in the video below:

VR support for Minecraft means you can hop into that roller coaster and feel like you’re really riding it. But this also means that Microsoft is using one of its most popular entertainment brands to encourage PC owners to upgrade to Windows 10. Friday, July 29, is the last day that Microsoft will offer Windows 10 for free to Windows 7 and Windows 8 owners. The company is hoping to get as many of its users on Windows 10 as possible, since this is part of the company’s new initiative to offer an operating system-as-a-service.

Bringing VR to Minecraft: Windows 10 Edition is a big leap for the franchise. You could play the mobile version with the Gear VR headset from Samsung.