If you text “HILLARY” to 316-854-1629 today, the millennial news outlet Mic will send you updates from Democratic National Convention and Hillary Clinton’s big nomination acceptance speech. Last week, Mic was doing something similar for the Republican National Convention. Both of these initiatives mark the start of Mic’s plan to have a presence on every major chat app platform.

In the coming months, Mic intends to roll out chatbots on Line, WhatsApp, Facebook Messenger, and Kik, as well as a Donald Trump-impersonating Twitter bot. Next week Mic will also introduce flash briefings — pre-recorded updates that news outlets like BBC, NPR, and The Economist already produce — that can be played on the Amazon Echo and other Alexa devices.

Mic will launch chatbots or SMS updates like the kind sent from the RNC and DNC for its reporters, niche topics, and major events. To send a new SMS, the editorial team discusses the best language inside a Slack channel, then the SMS message is sent directly from Slack using a bot made by a developer who works at Mic. 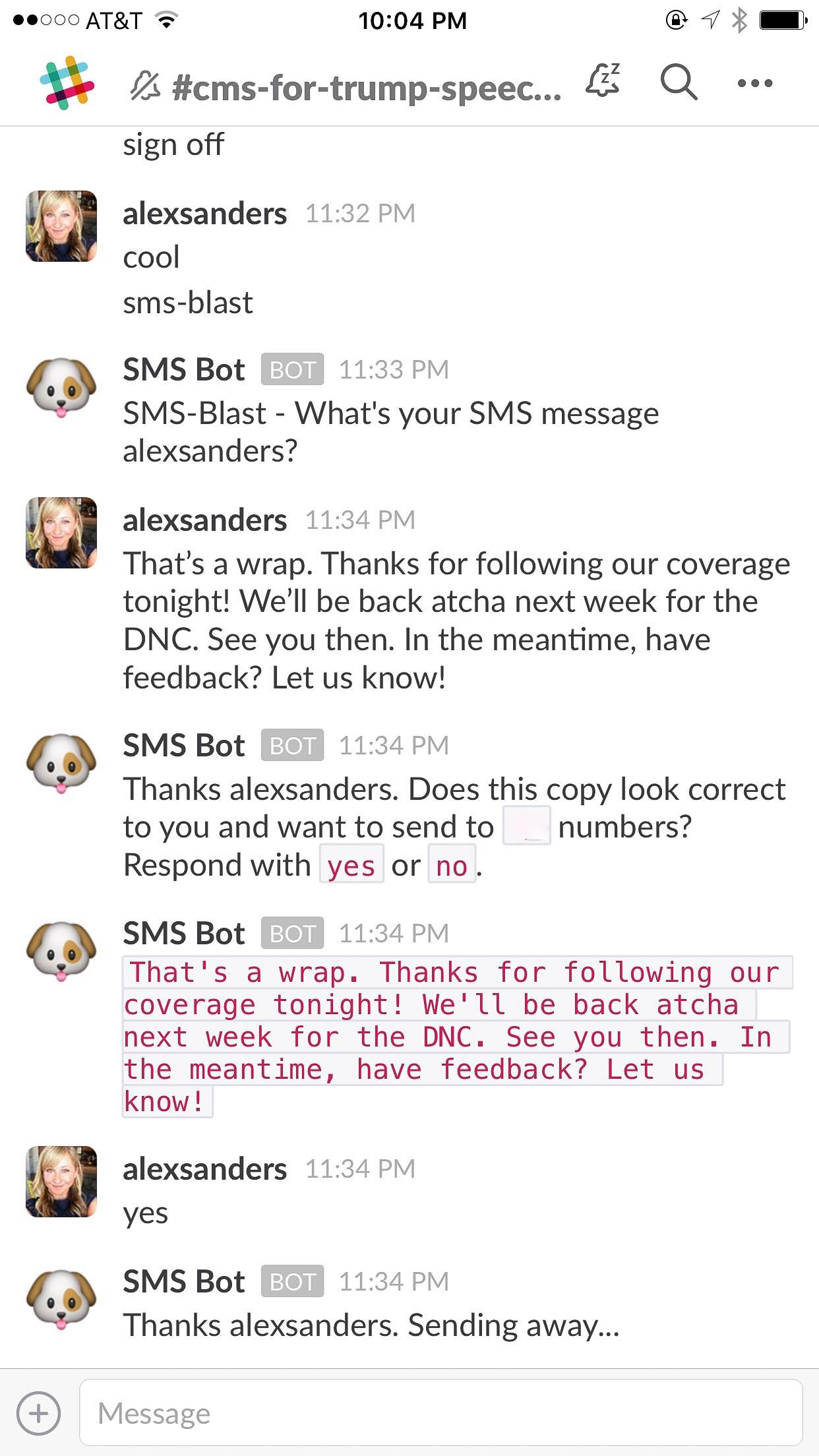 Haik declined to state the number of Mic readers who signed up for SMS updates from the Democratic National Convention in Philadelphia but said it was significant enough to continue experiments with SMS.

“I think for us that sort of live via SMS or via [Facebook] Messenger experience is the new live blog in a lot of ways,” she said. “We’ve actually road-mapped out close to 10 different ideas that we’ll be launching in the next six months around live events our users are most interested in.”

Events that Mic plans to use artificial intelligence-powered bots or human-driven SMS notifications for include easy-to-anticipate award shows and “stuff America watches on television,” but also the next Ferguson or Orlando or other major news events when Mic deploys reporters in the field.

Haik calls the customization of content for platforms to enable one-on-one or one-to-many conversations “atomic news” or microjournalism. A limited number of messages (fewer than 10 were sent from the RNC) are sent via SMS because Mic doesn’t want to overwhelm people with too many messages. Links are only sometimes included in SMS messages because it’s about building audience and providing a service, not clickthroughs, she said.

Bots for news readers on popular chat applications are just beginning to emerge.

CNN and BuzzFeed launched new chatbots at the Republican National Convention last week. The BuzzFeed chatbot was used to measure reader reaction to news events in emojis and encourage the sharing of photos and videos from both the convention floor and the protests outside. The CNN bot gets smarter over time — the more a reader interacts with the bot, the more it learns about the kind of stories that person likes.

Mic has made bots for readers to interact with for months now, like the emoji-driven DisOrDat and Caption Contest, which invites users to caption a new photo each day.

It was the response to the Kik bot TrumpChat that convinced Mic to spend more time and energy on reaching readers on chat apps. The bot averages 23 interactions per session, a rate Kik told Mic is higher than almost any other bot in the Kik Bot Shop, Haik said.

“When you see a user interacting that much with your content, it’s a whole different sort of validation around the work that you’re doing,” she said.

A Mic editor edits the bot’s responses daily to improve its machine learning, she said.

“In all of my journalism experience and experience in digital, it’s the first time I’ve ever been able to deploy or assign an editor specifically to a platform that way and produce for, so that’s a very cool thing,” Haik said.

The response from readers when asked if they want to receive messages from social justice reporter Jamilah King also convinced Mic newsroom leaders to “double down on the approach” of building “microaudiences” around individual beats and reporters, Haik said.

“I think that there’s a retention piece there, kind of a daily habit that can be formed in a new way, so that’s kind of our bigger strategic thinking about it,” she said.