There is a meme that the mobile game market is mature and that growth is slowing. This couldn’t be farther from the truth. According to market research firm Newzoo, mobile game revenue has surpassed PC and console and is growing an order of magnitude faster than other segments. However, even that view aggregates all game segments, and averages out some significant peaks achieved in emerging segments on mobile. 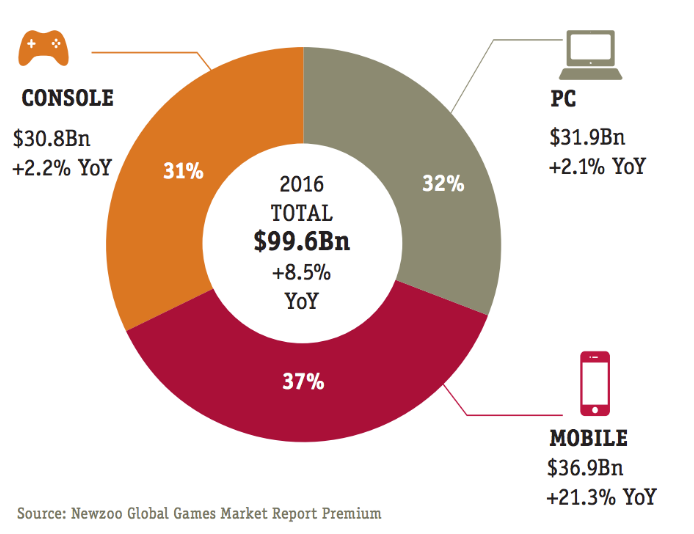 Diving deeper below the surface, mobile games are not a one-size-fits-all solution. The fastest growth is coming from areas outside the mainstream empire builders and match-3s. Triple-A games (with higher production values and deeper mechanics), made by developers whose primary revenue comes from PC and console games, and indie games, made by small teams focused on art and innovation, are succeeding on mobile in a big way. In fact, we’re seeing over 50 percent year-over-year growth in consumer spend on triple-A games and indies each, on Google Play.

Both segments are accelerating in growth by bringing compelling experiences to mobile. Certainly, there’s the well-known proposition that big-brand IP drives newfound success. But it’s more than that – amazing results occur when developers build highly tailored experiences for the communities of these beloved brands. In other words, it’s not just the IP that makes a great game — it’s the glove-like fit between game design and the essence of why we fell in love with the characters in the first place.

Jason Chayes, the production director for Blizzard’s Hearthstone: Heroes of Warcraft card game, has said that his team set out first to make the best game it could make. But more importantly he defines that greatness not just in terms of what they themselves think of the game but also in how the community gets excited about it. That level of authenticity is often missing in games that slavishly slap a branded IP awkwardly onto a proven mobile game genre, and call it a day. It needs to fit, and fit well.

Let’s look a bit closer at this, and consider the example of EA’s Star Wars: Galaxy of Heroes, which is one of the top-grossing games on Google Play today. It’s not the first to use the Star Wars IP, but it has done better than others by embracing how people engage with Star Wars characters and played with Star Wars for decades.

This was deliberate and inspired. Executive producer John Salera says, “We went back to our childhood and talked about what it was like to collect the wonderful action figures, to bring them over to friends’ houses, and to both recreate battles from the films as well as assemble scenarios from our own imaginations. We built our game around that metaphor.”

And, of course, the pitch-perfect example of pitch perfect fit is the current overnight sensation that is Pokémon Go. This game from Niantic, Inc. is the poster child for tapping into a community of players not just focused on IP but also on how they actually interacted with characters and play mechanics in the original experience.

But this isn’t the lunch bell for AR clones to pop out of the woodwork. Instead, in many ways this is the culmination of CEO John Hanke and the Niantic team’s 20-year journey from Google Maps to Ingress to Pokémon Go. There are elements of physical movement, real world discovery and natural flick gesture input that make this an extraordinarily accurate match for the play style introduced in the RPG collection mechanics of the original game decades ago.

Jump-starting the next big thing

Technology improves to give developers more tools to design experiences that fit with beloved IP, appealing characters, and natural human behaviors. VR and AR are particularly well-suited to empowering triple-A and indie games developers, given their decades of iterating in visual and narrative fidelity. Platforms built on VR and AR would be well-suited to encourage innovation from these segments for these reasons, not just because they have achieve that glove-like fit, but also because they have the audacity to innovate. Certainly we see this in the ongoing growth of an existing platform like mobile, but it’s also critical at the launch of something new.

Jamil Moledina is the Games Strategic Lead for Google Play, and he manages featuring of strategic segments on the store and games outreach for Daydream, Google’s high-quality mobile VR platform