The World of Warcraft needs a hero, even if its maybe-crazy Night Elf with glowing green eyes.

On August 30, Blizzard releases Legion, the sixth expansion for its hugely successful World of Warcraft. The online role-playing game makes most of its money from monthly subscriptions, so massive content drops from expansions help back lapsed players and keep current ones engaged. World of Warcraft originally launched back in 2004, but these expansions have kept the game relevant, even if its no longer the colossus it once was.

Legion adds a new class, Demon Hunter, areas to explore, and features (like a customizable Artifact Weapon and Class Halls for you to hang out in). It also brings back one of Warcraft’s most popular characters, Illidan Stormrage. We last saw the Night Elf Demon Hunter in Burning Crusade, World of Warcraft’s first expansion. He played a villainous role then. Players even (seemingly) had to kill him.

GamesBeat interviewed Legion’s game director Tom Chilton and senior art director Chris Robinson about bringing Illidan back, his new role in the story, how making expansions is different from it was in the early days of World of Warcraft, and more. 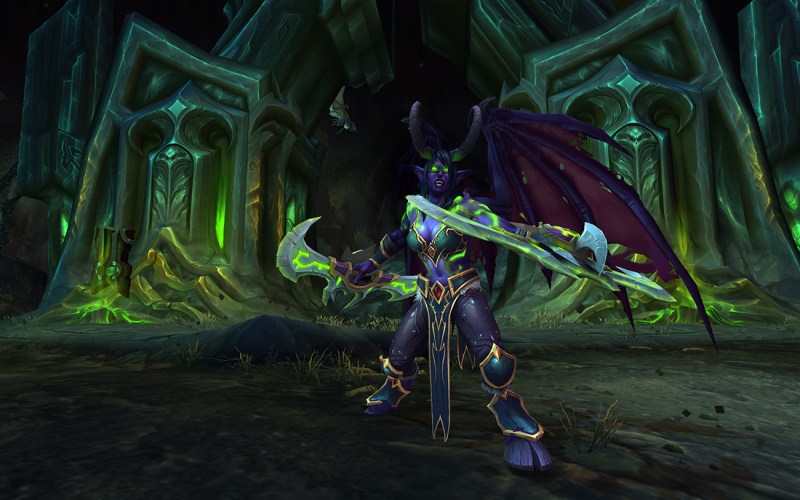 Above: Demon hunters are World of Warcraft’s newest melee class, coming in the Legion expansion pack.

GamesBeat: Illidan has always been a complicated character. He’s often leaned toward a villainous role, but it’s always been ambiguous. This seems like the first time he’s being cast more on the heroic side.

Tom Chilton: Internally at Blizzard, we’ve always viewed him as a tragic hero in a way. We’ve always seen him as, well, his ultimate goal is to take on the Legion. The problem is that his methods of doing that are unsavory to Azeroth as a whole — particularly to the Night Elves and so on. That’s always been a source of contention and led to him splitting off to go to Outland. We felt like his evolution into a hero for this expansion made sense. That’s ultimately what Illidan is about, fighting the Legion.

Chris Robinson: There’s always two sides to every story. We got to experience that previously from the player’s perspective, coming up into this moment where he feels like he is the bad guy. You have to take him out in order to progress. But there’s this wealth of information about his side of the story that we didn’t know coming into that fight and that experience.

When we started talking about the Legion invading Azeroth, that’s an awesome opportunity to go back and take a look at Illidan and the core of why he’s a tragic hero, what journey he’s gone on to get to where he’s at, and then tell that side of the story, looking through the other side of the glass and seeing, from that perspective, how we as players kind of screwed up a bit.

GamesBeat: Has his popularity kind of transformed his role? Does that have an impact?

Chilton: We’ve had a sense, for a very long time, that there would be a time where it made sense for Illidan to make a return. Certainly there are lots of very important story elements to the demon hunter starting experience. It shows some things from his perspective. The Harbinger cinematic we just saw, and then there’s a limited quest line as you progress through the Broken Isles, and that caps off at max level to tie it all together and make it all make sense, why this is happening and how it is that he’s coming back and exactly what’s going on with that. It all fits very well together. I’m excited for players to be able to experience it all once all the cinematics are viewable and all that stuff.

Robinson: Story defines character and not the other way around. It’s not as if there’s so much investment in this character that we have to find a way to cram him into the story that’ll feel awkward and weird. It’s more like, the Legion is invading Azeroth, so who’s the central character we can rely on to 360 approach that, from all different angles? He was the natural choice from that aspect. 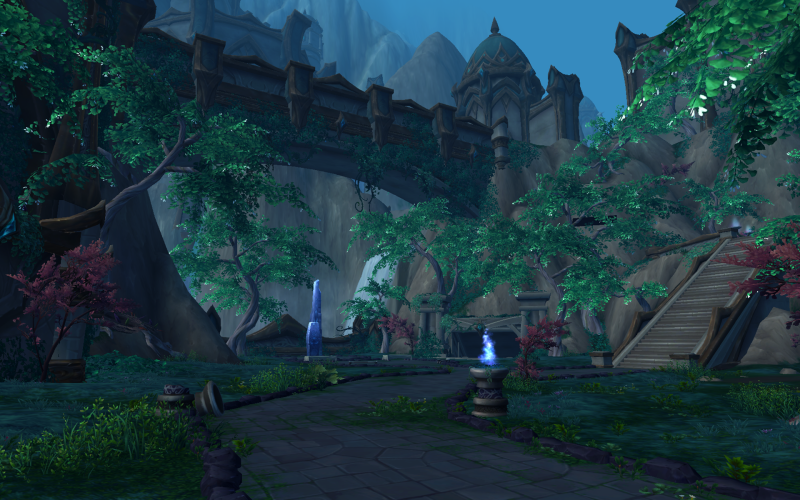 Above: Suramar is one of the new zones players will see in World of Warcraft’s Legion expansion.

GamesBeat: When he was killed off, did you think his death would be permanent? Or was it always in the back of your minds that he could return.

Chilton: It was [always in the back of our minds that he’d return]. We always felt like — we tried to make sure that there were enough loose ends that hadn’t been tied so that it would make sense. We didn’t know exactly what the method would be that we would use to realize that, but as we got into the Legion expansion storyline and started to think through what made sense to evolve the story, it organically came out of that.

Robinson: When we were in Burning Crusade, that was like a mini-invasion. It was another planet. You didn’t have a connection to it. We defeated them, beat them back, and for all we knew — it’s a little bit of the Legion, but how much do we really want to explore that?

I think we ended that knowing that we’d just had a peek at what the Legion really was. Ultimately, the terror there is not if they invade another planet and we need to go and help out. The terror is, what if they come to Azeroth and what if it’s not the B squad they’re bringing? What if it’s the major invasion we have to take on?

GamesBeat: In Warlords we had the alternate Draenor. We saw a lot of characters who were dead before coming back. Was there ever a worry about cheapening death in Azeroth?

Chilton: There is. There totally is. We have to be conscious of that and make sure that when we do it, it works and makes sense and feels right. Otherwise you’re absolutely right. It starts to feel like it’s meaningless. Varian died. Just cast a res! [Laughs]

GamesBeat: Looking at the expansion, with Illidan and so forth, you see a lot of Night Elves. Maybe not more of the Alliance in favor of the Horde, but with Draenor, it was very Horde-focused. Was there a conscious decision to have a bit more the Alliance races represented here?

Chilton: I wouldn’t really say so from a standpoint of — we concepted these expansions together, back when we were halfway through Mists [of Pandaria] development and we were starting preproduction on our next expansions. We jammed three different expansion concepts that we ended up liking, and it was really about, well, what order do we fit these in?

We never thought of them at the time as, this is the Horde expansion and this is the Alliance expansion. It just worked out to feel that way. It’s funny, because even when we had announced Warlords and got that feedback — oh, this feels like a Horde expansion — well, okay, I guess that’s understandable. We didn’t think of it that way, but we think the next one will offset that pretty well. It’s just a shame we couldn’t talk about it for two years.