All technical woes aside, Pokémon Go—which I’ve been playing nonstop since its release now—is a lot of fun. While it may not offer the complex gameplay, storytelling, or character development the past decade of Hollywood-standard video games has delivered, it’s engrossing — and its astronomic growth is a phenomenon.

Which got me thinking … what does account for the appeal? As a way to come up with an answer, I’ve made these four observations, which are as much about human nature as they are about gaming culture.

1. It’s just like that one Star Trek: The Next Generation episode

Pokémon Go has been compared to The Matrix, Ready Player One, and just about every other dystopia where technology controls humans. But while Pokémon Go arguably is an addictive worldwide phenomenon whose ultimate reach is yet to be determined … wait, am I talking myself out of my own conclusion that it’s not actually dangerous to society? OK, it’s not, seriously. It does, however, remind me to an eerie degree of “The Game” episode of the Star Trek: The Next Generation TV series. In “The Game,” the crew of the Enterprise became obsessed with an augmented reality game in which the object is to throw a flat plate (Pokéball, anyone?) into a cone (Do I hear Pokémon?) in order to score and move to the next level. 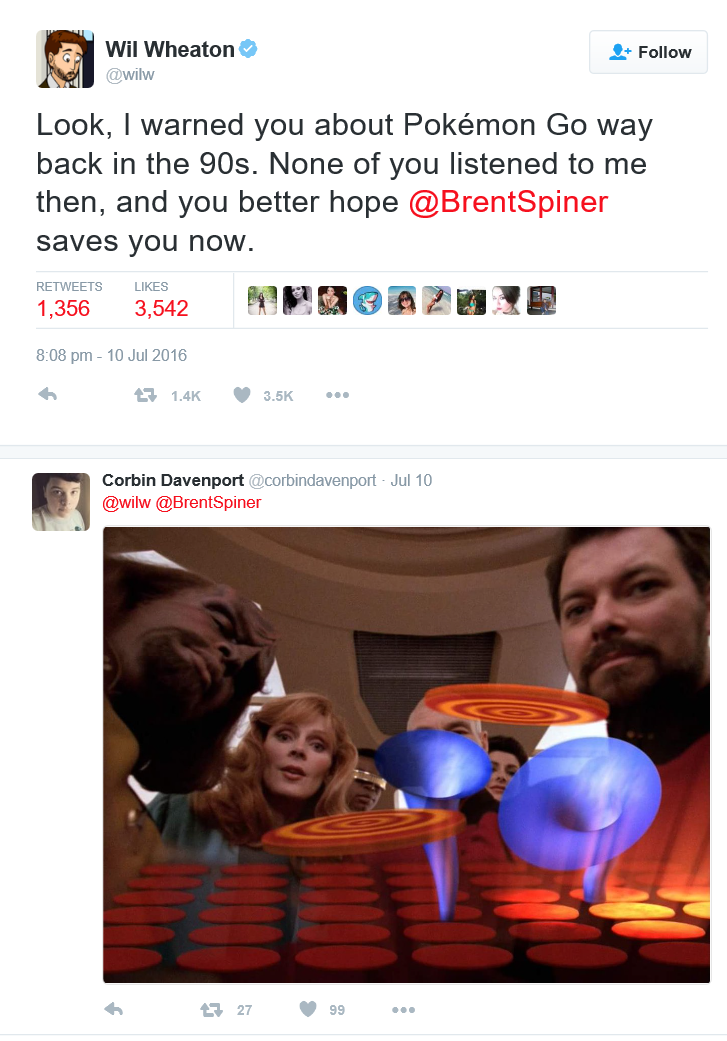 Apparently I’m in good company, because Wil Wheaton, who played Wesley Crusher in that episode and later saved the Enterprise, even Tweeted about it.

The verdict: While Pokémon Go doesn’t (yet) seem to psychologically manipulate people, it is, for better or worse, mesmerizing. And people love to be mesmerized.

2. I want it to keep getting better

Nintendo was once known for stellar gameplay and mechanics, but it’s been struggling to keep up with Sony and Microsoft in the marketplace. Niantic’s Pokémon Go is the first hit associated with the Nintendo brand in quite a while. As someone who grew up with Nintendo games, I hope they can turn this into a comeback and that the excitement around Pokémon Go can catapult them back to their former glory. Nintendo needs to take Niantic’s start and increase the depth, interaction, and engagement. Right now it’s simple—catch, level, feed, fight, train. Lather, rinse, repeat. Even casual gamers need more.

The Verdict: I guarantee I’m not alone in hoping Pokémon Go sticks around and gets more challenging, which just shows that people love a success story, especially when whoever’s being successful is somewhat of an underdog. 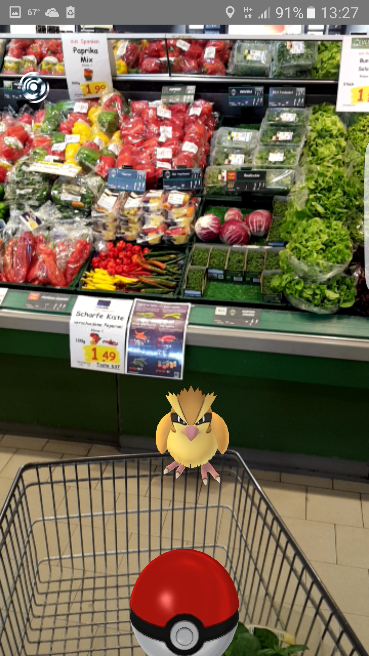 I never expected that playing Pokémon Go would bring me closer to generations I must admit I barely knew—or thought I could know.

Pokémon Go has connected me with people—while grocery shopping, going for my morning run, or just walking down the street. Within the first three days I was stopped by kids less than half my age and a couple more than twice my age.

On day 2, I noticed several tweens in the grocery store pointing at me, whispering, “Look at him. …” I turned to them, held up my phone, and asked, “Pokémon?” Nods, and big smiles. Nearly 30 minutes later, while hanging out at the cheese counter where they’d caught a monster, we’d talked about smartphones, gaming, school, grades, friends, sports … and I got an all-too-rare glimpse into what it’s like to be a kid in 2016.

Day 3 brought me face-to-face with an elderly couple who wondered, as they saw me stop and hold up my phone during a run through the forest, what I was taking a photo of. I told them what I was up to, and they were in awe of today’s technology. This, too, became a conversation about how maybe they needed phones, about where they’d grown up, their family, their work, their life.

All the scary stories about people being injured or lured to harm by strangers while playing Pokémon Go, while true, likely don’t happen nearly as often as the sort of positive experiences I had with people in my own community—people I probably never would have talked to, were it not for Pokémon Go.

The verdict: People want to connect, and it’s amazing how the shared experience of a cultural phenomenon like a game—or a movie, or a book, or a TV show—can forge common ground among people who otherwise couldn’t be more different. And the more we have these experiences, the more open we are to recreating them.

4. It makes you go outside

Truth be told, this aspect of Pokémon Go does make me feel a bit uneasy: while the game’s become mainstream in a very short time and is all over the news, you can’t expect every last person on earth to know what it is or how it’s played. Which could explain the suspicious looks I’ve gotten while wandering around my quiet family neighborhood. While nothing bad came of any neighbors’ quizzical looks, I’m sure there were moments of confused uneasiness, and if you’re going to play, you’re wise to consider your surroundings and be conscious of people’s  privacy. And if you get “those” looks, explain it (or invite them to play, it could turn out well!—see observation 3).

But you can’t discount the really wonderful opportunity to explore areas near your home, work, or school that you may never have seen. I took it on my morning run (which usually follows the same route) and ended up going down beautiful forests paths I’d never seen and through neighborhoods I’d never been to. You’re essentially combining exercise, exploration, and gaming—which until now never really went together that well.

The verdict: While I am a bit torn about the overall benefits of Pokémon Go’s ability to bring you together with new people and new aspects of your everyday world (see: potentially freaking out the neighbors), there’s no doubt that its forcing players to go beyond routine is a big part of its appeal. People love adventure.

Pokémon Go promotes exercise and getting outdoors … but it makes you look at your phone even more than you probably already do. And some of the things that account for its appeal—the fact that it’s somewhat mesmerizing—also have a flip side, in this case overly repetitive gameplay. You should play it, too, see for yourself, see if the appeal is well-founded, see if its current cult status is likely to last.

While I’ve noticed my interest waning (I spent hours on end in week 1 catching dozens of Pokémons and now use it only 15-30 minutes a day in week 2), I’m not sure yet if I’m getting tired of it overall, or if there’s going to be a “second wave” of excitement.

Sandro Villinger is the Device Performance Expert at AVG Technologies, where he helps create products to clean up, speed up, and power up computers, smartphones and tablets.