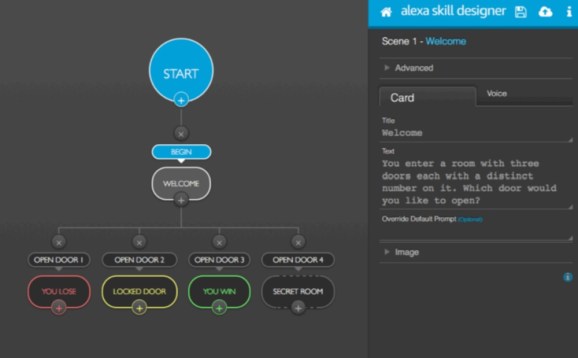 Amazon has something special in store for developers who support its Alexa voice-command platform. Starting today, the company will provide tools to enable developers to create voice-based games on Alexa.

Now a wide variety of developers will be able to create “choose your own adventure” games for the platform. Amazon is starting out by highlighting a new Batman-themed choose-your-own-adventure game, The Wayne Investigation, about the killing of Bruce Wayne’s parents. The game is a collaboration between Warner Bros., DC Comics, and Amazon.

Alexa has quickly carved out a spot for itself among gaming developers and enthusiasts looking to explore voice as a UI. In fact, 20 percent of Alexa’s top skills are games, including Jeopardy!, Animal Game, The Tickle Monster Game, and more. And in the last month, Alexa customers engaged in over 300,000 game sessions in the top five game skills alone.

Amazon is specifically sharing a tool with source code available to allow developers to graphically design “choose your own interactive adventure” games for Alexa. In a blog post, Amazon said interactive adventure games represent a new category of skill that enable customers to engage with stories using their voice. With these skills, you can showcase original content or build compelling companion experiences to existing books, movies, and games.

In The Wayne Investigation skill, you’re transported to Gotham City a few days after the murder of Bruce Wayne’s parents. You play the part of a detective, investigating the crime and interrogating interesting characters, with Alexa guiding you through multiple virtual rooms, giving you choices, and helping you find important clues. The Magic Door, an original choose-your-own-adventure series, enables you to tell Alexa what choices to make as you navigate a forest, a garden, or an ancient temple.

The tool provides an easy-to-use front-end that allows developers to instantly deploy code for a story or use the generated code as a starting point for more complex projects. It was created by Thomas Yuill, a designer and engineer in the Amazon Advertising team.

To experience the game, simply enable the skill in your Alexa companion app and then say, “Alexa, open The Wayne Investigation.”