After much speculation, Samsung has officially unveiled details around its Note7 smartphone. The company has brought the best of the Galaxy S7 into its next generation Note device and even added new features, such as an iris scanner, a GIF maker, and a reimagined stylus that delivers a more natural writing experience.

Bypassing the Note6 branding, the Note7 instead takes much of what’s great about the Galaxy S7, including its form factor: The phone has curved edges, and it is both water and dust-resistant, so feel free to dump champagne over it. It contains the same 12 megapixel camera as the earlier model and comes equipped with Android Marshmallow. 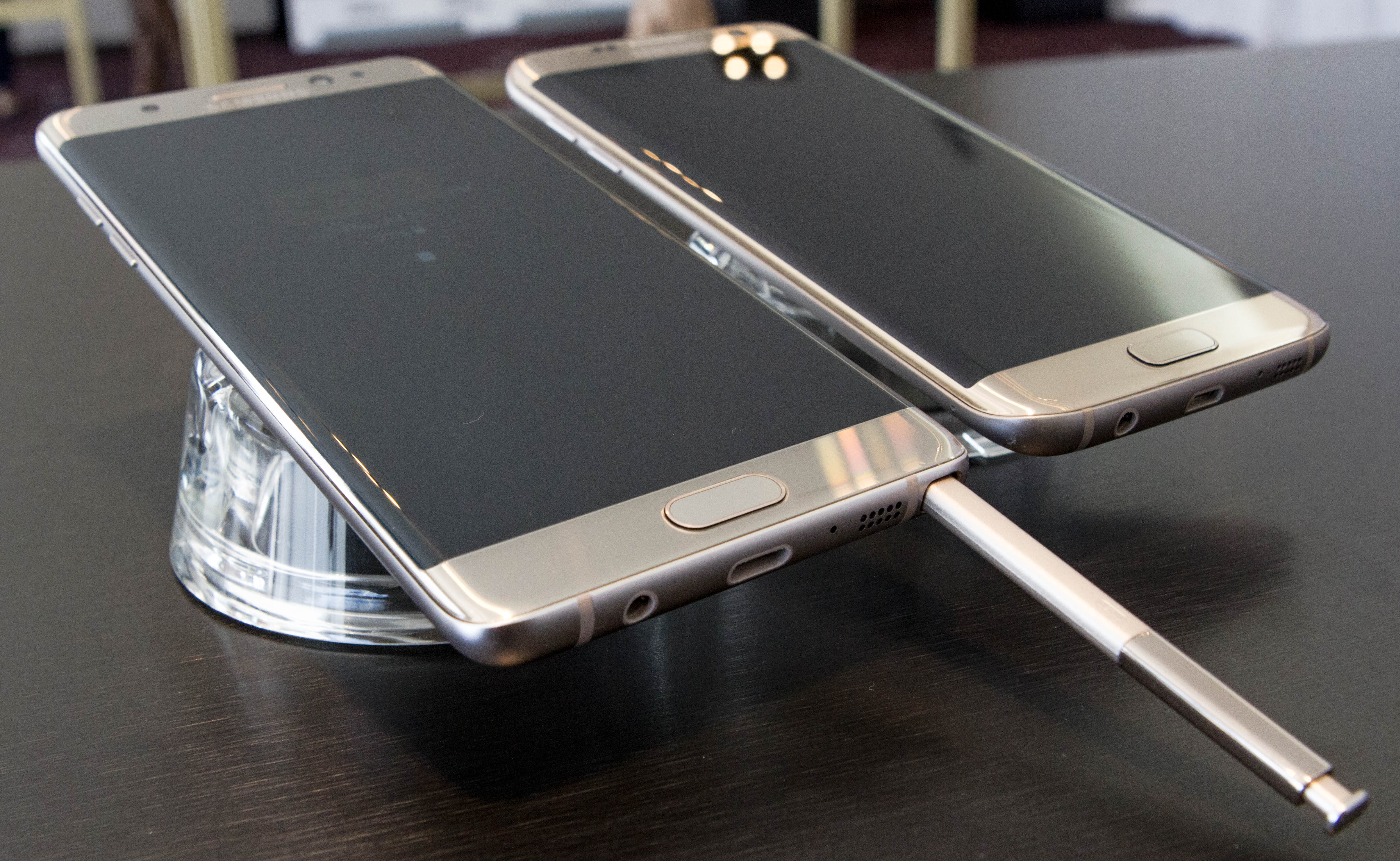 Above: The Samsung Galaxy Note7 next to the S7 edge.

Samsung has added the Always On display, just as it did for the Galaxy S7 — enabling you to see things on your screen without having to press a button — as well as the Edge UX.

The camera is exactly the same as on the S7, with 12 megapixels in the rear and 5 megapixels in the front, super-fast autofocus both in the day and at night, and 1.7 µm pixels on the image sensor. But Samsung has tweaked the app that comes installed on the Note7 to make it easier to use with one hand. Now you’ll be able to apply filters with a Tinder-like swipe left, while a swipe right will access different modes to capture the moment. 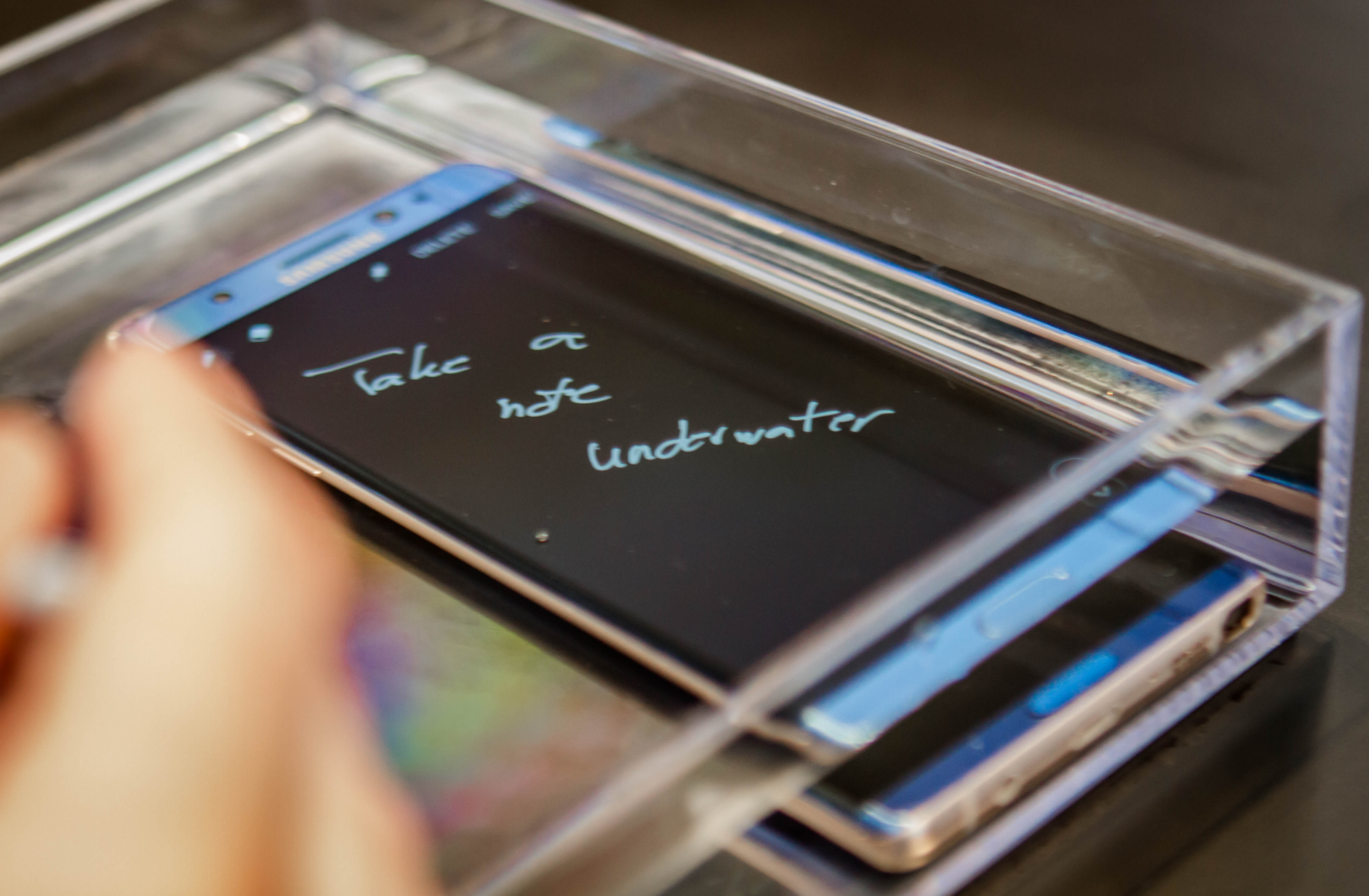 Above: Although it’s submerged in water, you can still use the S Pen on the Samsung Galaxy Note7 to write notes.

The phone will be available in silver titanium, black onyx, and, in another first, blue coral.

Phone in one hand and better stylus in another

“The Note has always had a unique history,” a Samsung spokesperson told VentureBeat. “It’s a physical object where you have an analog connection with the big screen or the pen. We knew we couldn’t approach it in the normal way… People wanted to have a big screen but have a compact package at the same time to hold in their hand.”

Although the device has been dubbed a “phablet,” the company doesn’t believe it feels like one. Samsung questioned every edge, surface, and detail to produce the right form-factor, all with the intention of adhering to what the company calls “symmetrical beauty,” which is perfect symmetry not only from side to side, but also top to bottom and front to back. “This has always been regarded as impossible to achieve,” the company told us.

Part of this design process involved changing what the stylus meant for users. “Note devices are more than big screens. The S Pen helps people do more,” Suzanne De Silva, principal product manager for the Galaxy S smartphones at Samsung Electronics America explained. The new stylus now includes a smaller 0.7mm tip — approximately the size of a ballpoint pen — and improved pressure sensitivity that’s designed to make it feel like you’re using an actual pen and to give you more control. 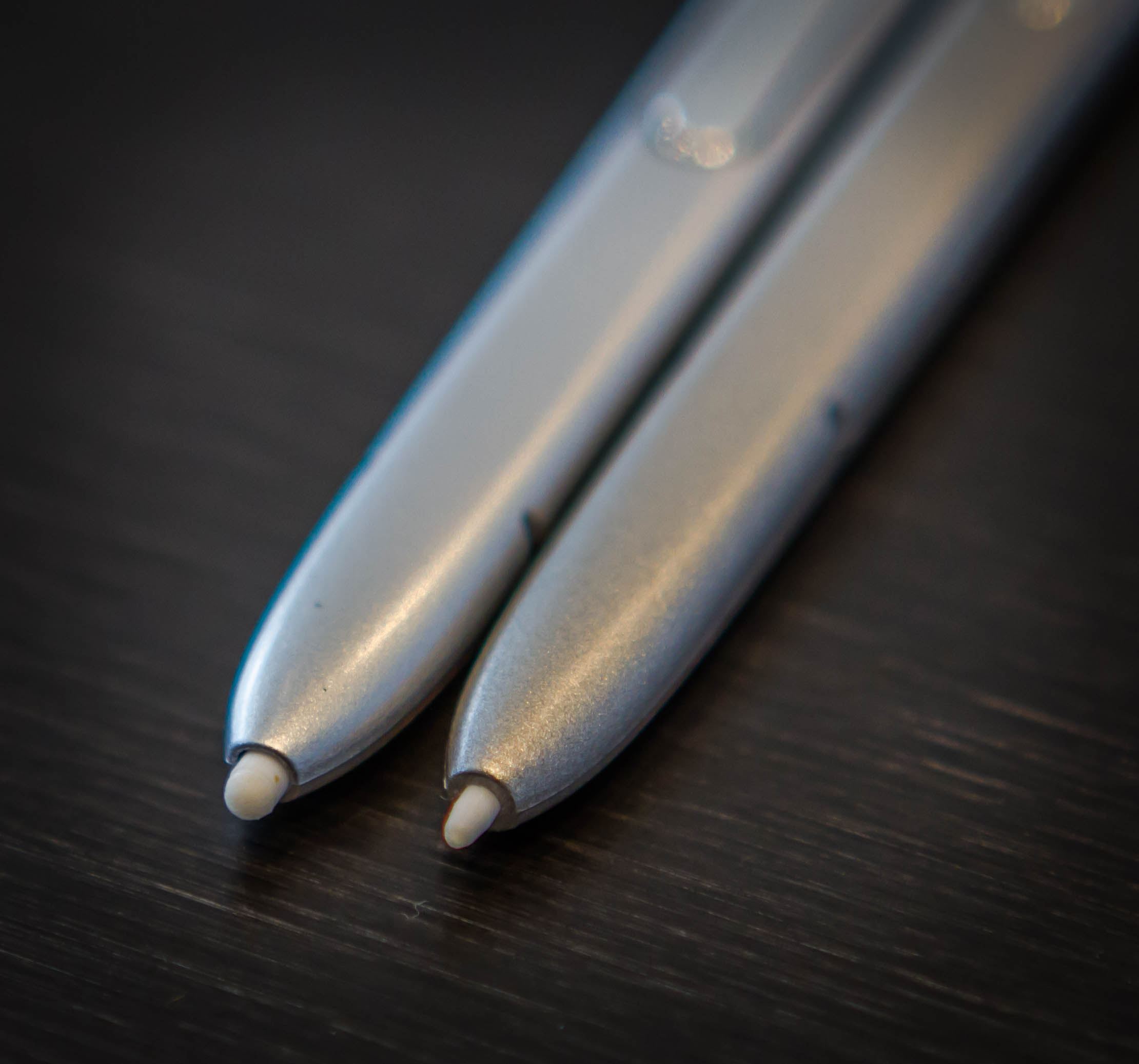 Above: The Samsung Note7 S Pen stylus tip (right) compared to the Note5.

The S Pen normally includes a button in the middle of the stylus, but with the Note7, that button has been relocated further down toward the tip, where it requires less hand-maneuvering to access. The idea is to make the experience feel as natural as possible.

Samsung’s Air Command technology has also been upgraded to include translation and magnification capabilities through simple hovering. De Silva explained that if you see a review of a restaurant that’s in a different language, you can press the microphone button to hear it translated into the language of your choice — it can read up to 30 languages and translate into 71. Additionally, should you find yourself shopping on your Note7, you can use the magnify tool without having to click anything, easily zooming in to get a better view. 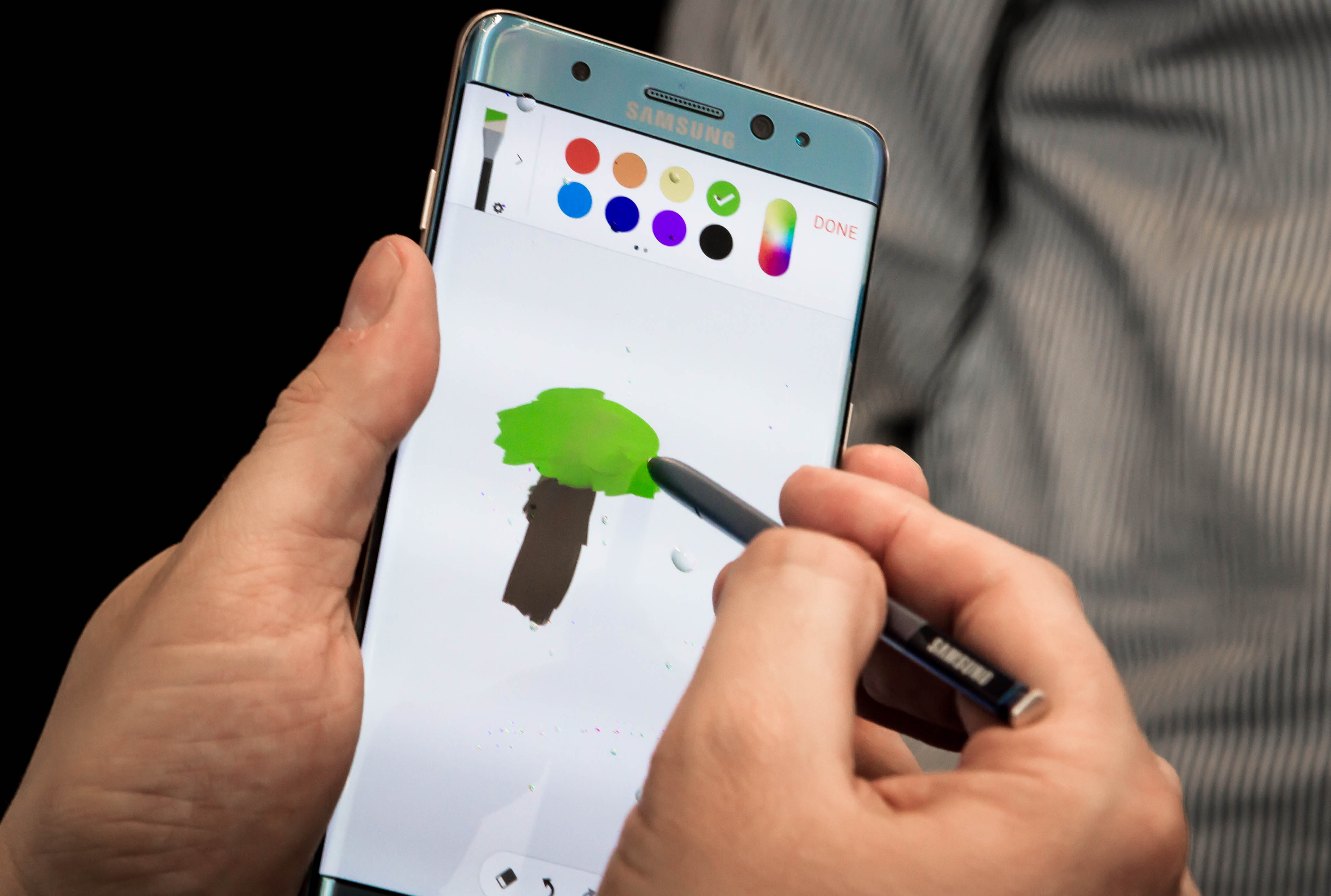 Above: Drawing on the Samsung Galaxy Note7

In the area of productivity, Samsung has consolidated a bunch of apps within Samsung Notes, including the action memo, scrapbook, and S Note. The company promises that it’s now easier to use the S Pen stylus within this single app, as users can jot down handwritten notes, draw, or even edit memos without having to jump from place to place. The company boasts that designers have been using the stylus and the Note’s capabilities to post creative art to Samsung’s Pen Up social network, which launched with the Note3 as a take on Deviant Art. 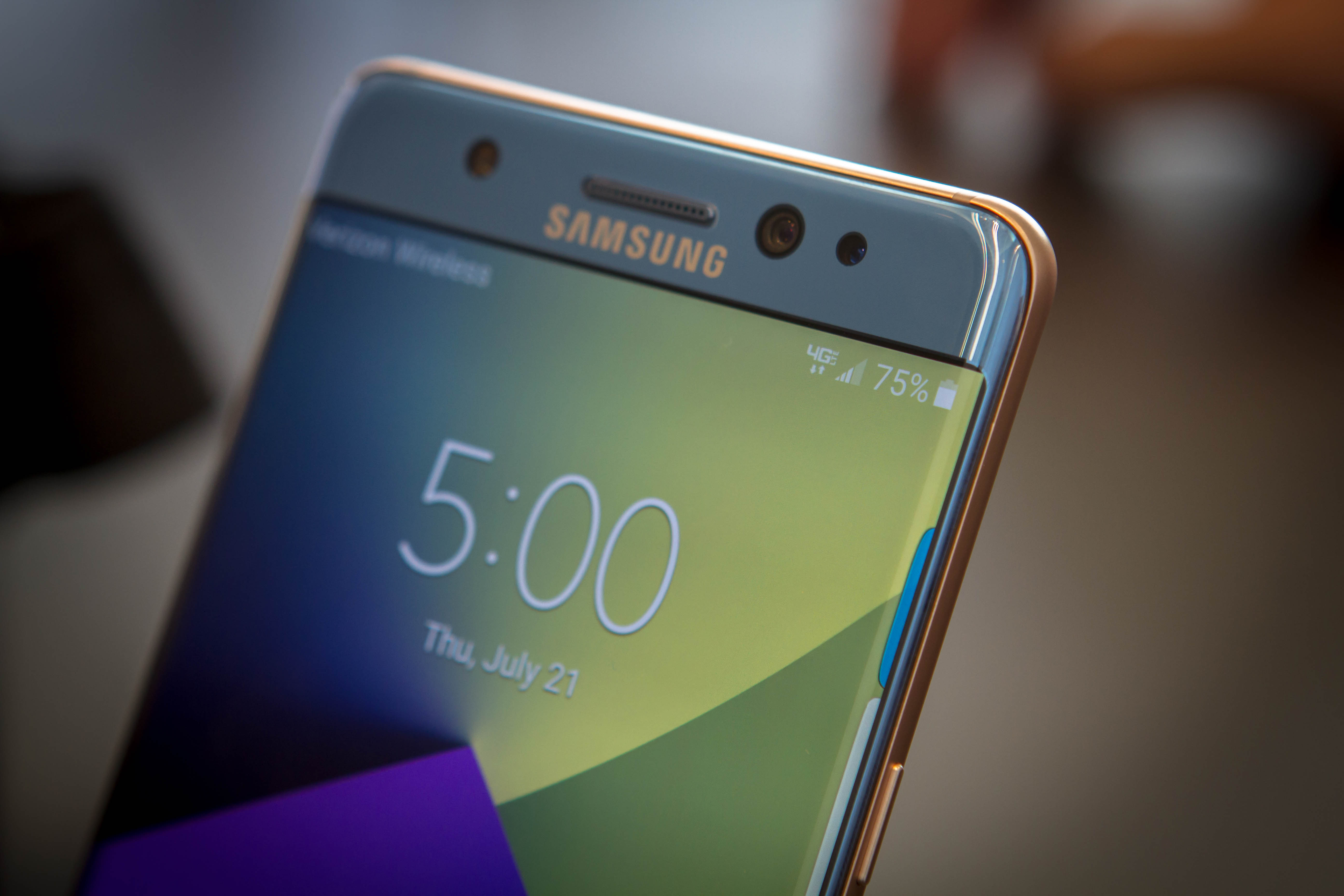 Above: The front of the Samsung Galaxy Note7 smartphone with an extra camera for the iris scanner.

In this age of enhanced security, companies are finding ways to better protect our data. Following the Apple/FBI situation, phone manufacturers are beefing up the security capabilities within devices, and Samsung has unveiled two innovative features. New to the Note7 is an iris scanner to add that extra level of protection and also a Secure Folder option that lets you file apps, documents, photos, and videos into a top secret location only you can access.

One thing that you’ll notice when trying out the Note7 is that there are two cameras on the front. While one is geared toward photos, the other is specifically designed to scan your iris. Samsung has retained its passcode and fingerprint scanner, but having an iris scanner is about enhanced peace of mind, not only for average device owners, but also for those using the Note7 for business, perhaps even through Samsung’s Knox security platform.

While you can scan multiple fingers, the Note7 will only accept one iris scan. And for those with prescription glasses, Samsung said that the scanner will be able to work without needing to take them off. It even contains technology to work in the dark.

In the future, the iris recognition technology could be used to handle payments that are made through Samsung Pay.

Dr. Asem Othman, a scientist at Hoyos Labs — which specializes in mobile biometric authentication — shared that while iris recognition technology isn’t new, Samsung’s inclusion of it in the Note7 could help implement a change in the industry: “Fujitsu launched the Arrows NX F-04G smartphone, the first smartphone with an iris recognition system, in Japan in 2015. Microsoft’s Lumia 950 XL followed later that year. Both of these phones feature built-in iris scanning user authentication. Apple may also be rolling out new iPhones with iris sensors in 2018. I’d expect this to become a trend once Apple and Samsung add NIR sensors to their phones.”

The Secure Folders feature is specific to the device and compartmentalizes private and personal information, keeping it away from the rest of the core operating system. Reminiscent of Knox, which protects data for work, Secure Folders protects sensitive data for any user. So you can add a copy of your passport, financial apps, address book, and anything else into this personal little cubby hole.

The GIF that keeps on giving

Since the Note7 carries over many features of the Galaxy S7 smartphones, the entertainment options include HDR video streaming and support for Vulkan Games. But one of the new features available on this Android device is the ability to create animated GIFs using the S Pen.

With a couple of taps, you’ll be able to capture an animation from a YouTube video or anything that’s not protected by copyright and create a GIF of up to 15 seconds. From there, you can share your creation on any social media service, be it Twitter, Facebook, LinkedIn, or Slack, or send it to a friend by text or email. This capability is possible through the Note7’s Smart Select option.

In conjunction with the Note7’s launch, Samsung has also created a few accessories, including several around productivity. Of note is the new “S View” standing cover that functions like iPad or tablet cases that convert into a stand. There’s a wireless charging backpack case that’s also waterproof. “We’ve tuned a lot of the…traditional accessories to compliment the device,” the company said.

Could the Note7 have major implications for the rest of the mobile industry, as VentureBeat’s Evan Blass has suggested?

Preorders for the Note7 start on August 3 and the device will be available worldwide on August 19. Pricing hasn’t been announced prior to the phone’s debut, but it will be supported by AT&T, Sprint, T-Mobile, U.S. Cellular, and Verizon Wireless. The phone will also be available at Best Buy, Amazon, Sam’s Club, Target, Car Toys, and at select Walmart stores.

If you purchase the Samsung Galaxy Note7 in advance you will get a free Gear Fit2 or Samsung 256GB memory card, but only for a limited time.

In addition to the Note7, Samsung also announced its next-generation Gear VR headset and the public release of its Gear 360 camera in the U.S. on August 19.