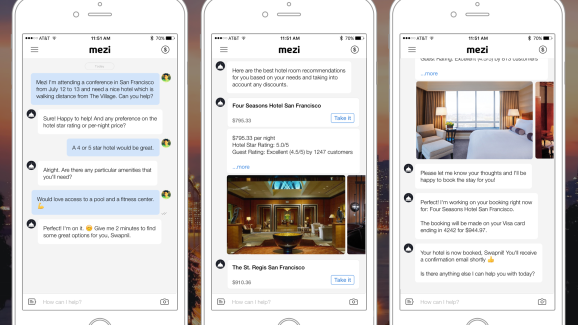 On the heels of a Series A raise, Mezi has a healthy vote of confidence (and 9 million big ones) to back its A.I. dreams.

The next two years will be a defining period, not just for Mezi but for the industry as a whole . It will be interesting to see  how this eager freshman class of A.I. startups will spur either mass adoption or an aversion to A.I.

I went for a long walk today with Swapnil Shinde, the CEO and cofounder of Mezi, and I had the opportunity to voice a mounting tension I’ve been feeling between two product focuses. On the one hand, we are laser-focused on deep learning and automation, areas that will allow us to operate with speed and efficiency and to achieve economic scalability. On the other hand, we are focused on an intentionally humanistic experience that rests on the psychological qualities of salesmanship and empathy. Innovation in the humanistic experience has helped Mezi achieve “BFF” status among customers (literally, we hear this over and over).

At Mezi, our business relies on both technology and psychology, yet our early stage growth doesn’t allow us to split our attention evenly between the two extremes. We can only have one guiding compass, one soul.

We had to answer for ourselves what about Mezi triggered that authentic and inspiring excitement.

For us, it was, in a word, relationship. A.I. means many things to many people. For Mezi, A.I. means the possibility of creating a “person” who knows you, cares about you, helps you, and garners the same feelings in return. This last point is important  —  it’s not that Mezi needs favors from you, but our most loyal customers are actually compelled to treat Mezi with a deeply human respect and care. Our customers have sent Mezi pictures of their new puppy, mailed us thank-you gifts and cards, and, on several occasions, asked us if they can leave a tip. We aim to give you technology that becomes your friend  —  your friend who happens to have superpowers in shopping and travel.

So how do we rationalize the two aspects of relationship creation and A.I. automation?

An apt analogy can be found in the idea of lead and support roles. The Mezi-customer relationship is the primary “feature” of the service and thus the “lead,” while the technology backbone exists in a supporting role to strengthen the relationship and psychology. The moment a user has to think about the technology itself (processing power, complex algorithms, etc.), that person is aware that they are watching a movie and ceases to be immersed in the story. In the world of product experience, that’s not good. That’s called kicking out the plug on the Matrix. While A.I., machine learning, and NLP are critical to Mezi, they should never pierce the silver screen.

The technology exists to make the Mezi-customer relationship seamless. The technology sees what’s going well in human assistant interactions and then grabs the baton and mimics the same behavior. From the types of communications (e.g. questions asked, delivery updates, etc.) to the exact verbiage (e.g. tone, emojis, lexicon, etc.), the technology recreates human experience in a very real and familiar way. I, myself, seeded a number of Mezi’s original automated responses, yet I can no longer quickly tell which messages were written by a human assistant and which by our A.I. bots.

In summary, A.I. at Mezi means creating a relationship with the customer. While a slew of startups are building A.I. personas, few are likely to succeed, because they won’t build enough of a human rapport to develop trust and loyalty. What’s missing in today’s software is relationship and rapport. The impersonal and generic nature of software means it is steadily marching toward seeming old and spent  –  it just doesn’t connect. We see a new possibility for technology. A.I. assistance gives technology the ability to build 1:1 relationships  — in a way that makes technology come alive. And that’s what’s authentically exciting to us and what we’re working to give the world.