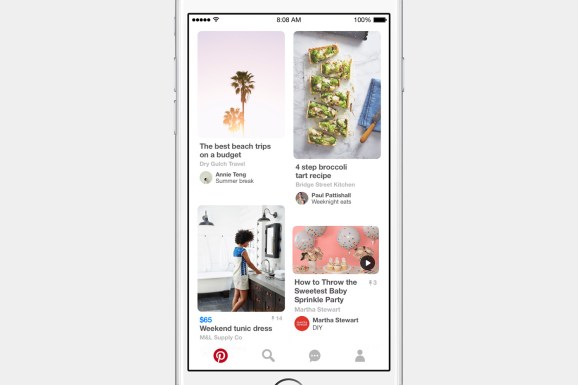 Pinterest is interested in not only getting you to watch more videos on its site, but in showing you those that are most pertinent. That’s why the company has begun testing out ways to leverage the technology behind its visual search capabilities to help you discover new videos.

In the coming months, Pinterest also plans to release a native video player, so watching and saving videos will be a seamless process.

As Facebook, Twitter, and even LinkedIn get in on the video space, Pinterest naturally wants to follow suit. But the visual idea and bookmarking platform is not about creating content — rather, it’s interested in surfacing content that’s already been saved, going back to 2013. People are already able to use the Pin It button — which recently converted to Save It — on YouTube, Vimeo, and even on TED’s website to highlight videos from creators and influencers that they think others may enjoy. Pinterest shared that it has seen a 60 percent increase in the number of videos saved to the site over the past year.

“With more video on Pinterest, it needs to be easy for people to find the videos that match their interest,” the company said in a blog post. To accomplish this, Pinterest is turning to the technology that currently powers its visual search offering. This search capability, which was released in 2015, uses deep learning to examine tons of data, such as images and videos, and then makes inferences in response.

In June, this technology was incorporated into Pinterest’s camera functionality, which means that if you take a picture using Pinterest’s app, it’ll scan the image and show you associated pins. Based on today’s news, it appears that the company is now hoping to apply this deep learning technology to video.

Pinterest will be able to use the technology to identify objects in a video, such as ingredients used to make a specific food dish, and to determine the type of video. From there, the system will display recommendations of other footage you might be interested in. And, of course, it’s a learning algorithm, so over time it’ll keep learning and getting better.

As for the native video player, the goal is to show brands, bloggers, and subject experts that Pinterest has tools to showcase videos. The company expects to eventually allow users to upload video right to the site, rather than having them post a video to YouTube and then pin it to Pinterest. It also means more traffic will come to the site, and the company will also be able to better monetize its video offerings.

Although the tool is still being tested right now, Pinterest said its improved video discovery will start to roll out across all platforms “in the next few months.”