This quarter’s funding year-over-year was marked by a higher total fundraising, but coming from a smaller number of deals.

Looking at the evolution of company valuations, we saw 20 up rounds, 11 unchanged valuations, and only 2 down rounds. The combined value progression is a staggeringly positive $75 billion, suggesting very good health — for the moment, anyway — for companies in the Unicorn Club, those that reach a billion-dollar valuation. 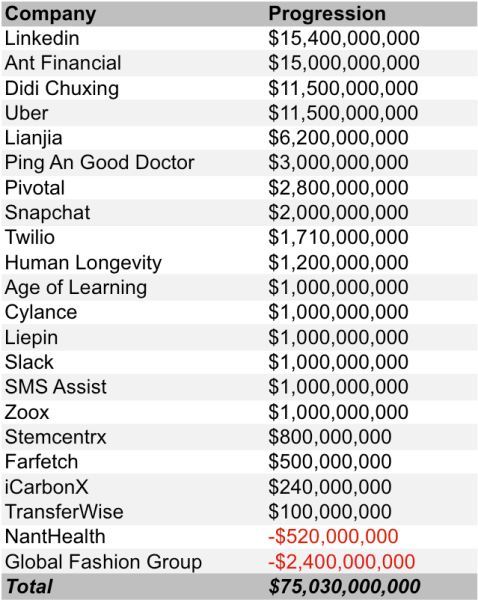 The Unicorn Club continues to greet new entrants, but at a slower pace. The second quarter of 2015 saw the emergence of 25 unicorns. Growth slowed in the back half of 2015: 15 in the third quarter and 13 in the fourth quarter. The slowing trend continued, with 11 companies attaining unicorn status in the first quarter of 2016 and 10 in the second quarter of this year. 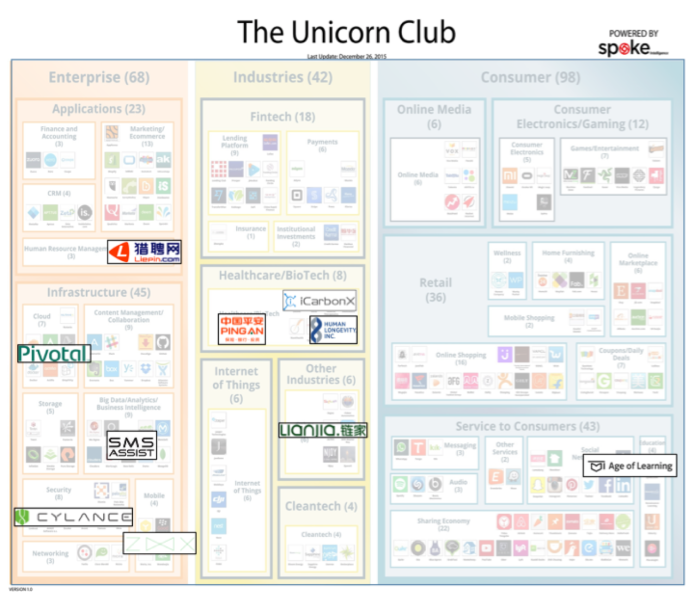 Human Longevity is a genomics and cell therapy company focused on extending the healthy, high-performance human lifespan.
Lianjia, also known as Home Link, owns 7 percent market share in China’s online and offline real estate services market.
iCarbonX is aimed at building an ecosystem of digital life based on the combination of consumers’ big life data, internet, and artificial intelligence.
Pivotal‘s cloud-native platform drives software innovation for many of the world’s biggest brands. They have millions of developers around the world.
Age of Learning is the rapidly growing company that created and continues to actively develop the multi-award-winning ABCmouse.com Early Learning Academy.
Ping An Good Doctor is a health care and medical service app offering text, photo, voice, and video consultation for preventive nursery care, guidance for doctor’s visits, post-diagnosis services, chronic disease management, medication alerts, and so on.
Zoox is developing fully autonomous vehicles and the supporting ecosystem required to bring the technology to market at scale.
SMS Assist is a Chicago-based technology company providing multisite property management to a roster of clients with more than 90,000 service locations.
Cylance is a global provider of cybersecurity products and services that strives to change the way companies, governments, and end users proactively solve the world’s most difficult security problems.
Liepin is a community-based recruitment site, offering an interactive high-end talent recruitment platform that bridges businesses, headhunters, and workplaces.

Twilio raised $150 million in its initial public offering, pricing the shares above the marketed range for a valuation of $1.23 billion. Twilio is only the second VC-backed tech company to go public this year, as high-valuation startups hesitate to file for IPO in a volatile market plagued with interest-rate uncertainty.

On the acquisition side, biopharmaceutical company AbbVie acquired Stemcentrx for $5.8 billion. Stemcentrx currently has five cancer drugs in development, with a focus on attacking the stem cells responsible for creating tumors. The acquisition will strengthen and accelerate AbbVie’s ability to deliver innovative therapies.

The AbbVie-Stemcentrx deal was dwarfed by Microsoft’s $26.2 billion purchase of LinkedIn. There is synergy between the companies and their products, particularly Microsoft’s Office productivity suite and LinkedIn’s core database of more than 400 million mostly professional profiles. The tie-up marks the coming together of the professional cloud and the professional network.

Didi Chuxing, the largest ride-hailing app in China, secured $1 billion in May from Apple, as China is becoming Apple’s largest market and Didi could become a major potential customer of Apple’s self-driving car. A month later, the company collected $7.3 billion in debt and mezzanine investment from a conglomerate that included AliBaba.

Uber raised $3.5 billion from Saudi Arabia’s sovereign wealth fund, gaining a crucial partner in its expansion into the Middle East. The new investment valued the company at $62.5 billion, making it the most highly valued venture capital-backed company in the world. (Note: The company’s valuation has now gone up to $68 billion.) The company has operated in Saudi Arabia since early 2014, and about 80 percent of its more than 130,000 riders in that country are women.

Ant Financial, the affiliate of Chinese ecommerce giant Alibaba that runs Alipay, has closed a funding round of over $4 billion, valuing the company at close to $60 billion. This made Ant Financial the second most valuable private technology firm, behind U.S. ride-hailing app Uber. The company has been on a drive to expand Alipay beyond China, particularly to help Chinese tourists make purchases abroad using its platform.

Addendum: In July, Uber announced the merger of its China division with market leader Didi Chuxing, just one year after calling China Uber’s “number one priority.” Despite Uber’s admission that it was losing $1 billion a year to build up its China operations, it could never close the market share gap.

This article is part of the Unicorn Landscape series. You can track this landscape and get all the latest news here.