Continuing the slow summer trend, the gaming industry spent an estimated grand total of $23.4 million running ads on TV in July, with 26 brands running 76 spots nearly 15,000 times. Once again, Machine Zone is holding turf as the clear winner, but the rest of this month’s leaderboard may surprise you: Besides King being back in second and PlayStation in third, we have two new brands, PerBlue and InnoGames, joining the ranks. 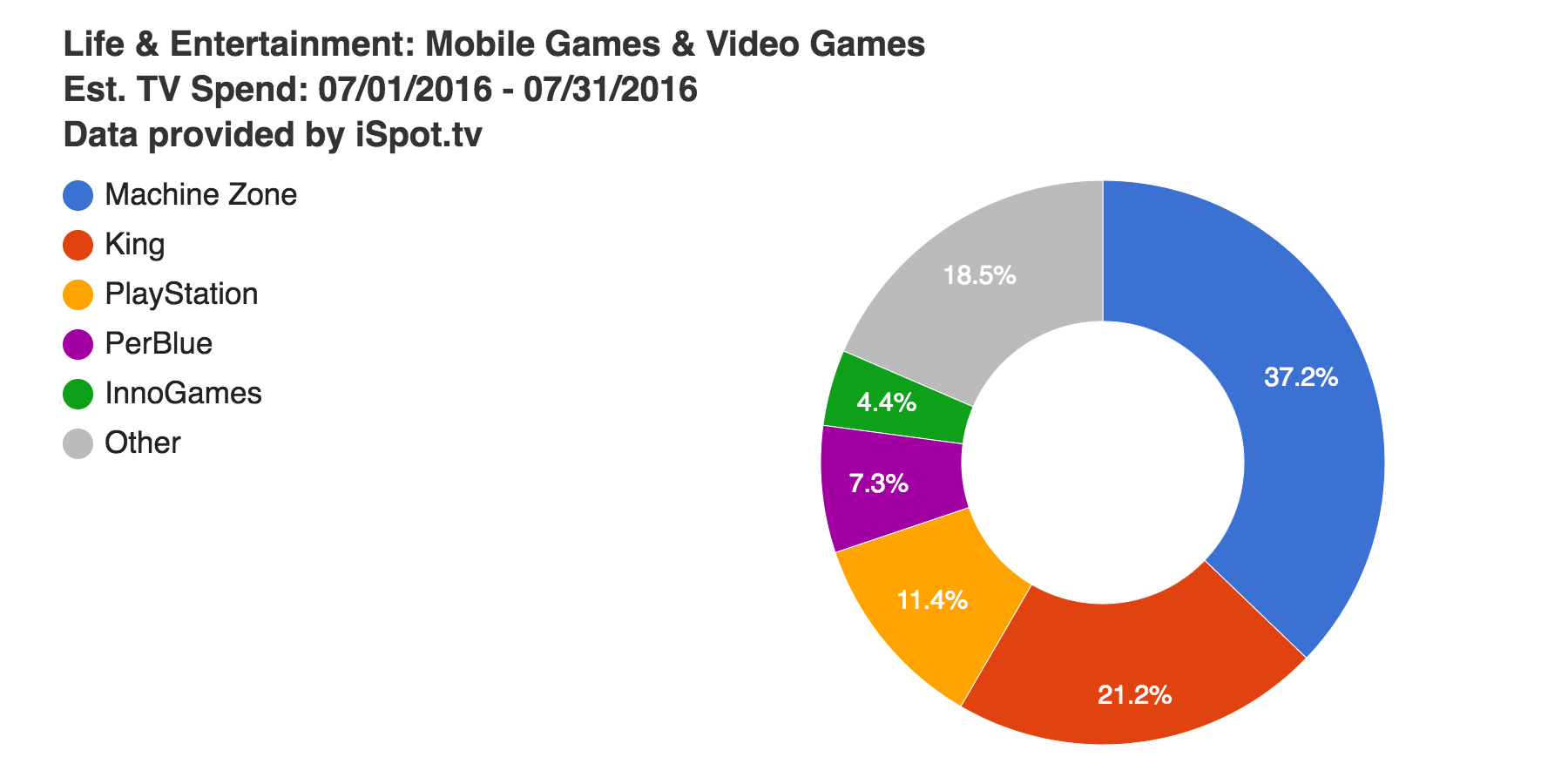 GamesBeat has partnered with iSpot.tv, which measures TV advertising in real-time, to bring you a monthly report on how gaming brands are spending and which are generating the most digital response. The results below are for the top five spending gaming industry brands over the last 30 days.

Clocking in with nearly 40 percent of the industry’s spend, Machine Zone ran seven ads 5,226 times in July. In total, the brand spent $8.7 million generating 435.6 million impressions on national TV throughout the month. Its top ad, “Airport,” received over 40 percent of the brand’s budget for the month, and ran nearly 2,400 times. It alone brought home 140.2 million impressions. This ad aired during the ESPYs, America’s Choice 2016, and UFC Fight Night: Holm vs. Shevchenko.

King returns to the spend leaderboard this month, closing out July having used an estimated $4.9 million worth of TV ad time in total. Promoting its newest match-3 game, Farm Heroes Super Saga, the brand ran two ads over 3,400 times, leading to over 355.1 million impressions on national television. Running most often on Wednesdays, the brand prioritized CBS, NBC, and Fox for this spend, running on shows including Zoo, American Gothic, and Good Morning America. The top ad, “Bigger is Better,” featuring “Tutti Frutti” by Little Richard, received nearly 98 percent of this push.

PlayStation clocked in at third, spending just under $2.7 million and accounting for 11.4 percent of the industry’s total. Through running 15 ads 940 times on national TV, the brand racked up over 162 million impressions. Although advertising a wide variety of titles, the bulk of these spots went towards Lego Star Wars and Headlander, a new collaboration with Adult Swim that will be available exclusively in the PlayStation Store. The brand’s top ad “Lego Star Wars: The Force Awakens – E3 Trailer,” ran just over 300 times, and alone generated over 50 million impressions. It appeared most often during episodes of SpongeBob SquarePants and Teen Titans Go!

Leaderboard newcomer PerBlue had a strong month, spending an estimated $1.7 million on national TV advertising for its new role-playing game Dragon Soul. Running just one ad over 1,200 times, the brand racked up an impressive 151 million impressions on TV. The ad, “Epic Hero RPG,” ran most often on Sundays, and most commonly on Law & Order: Special Victims Unit, Star Trek: The Next Generation and Quick Pitch.

InnoGames closes out our chart for July, spending an estimated $1 million (or 4.4 percent of the industry’s total) on national TV advertising. Running three ads promoting three separate titles, the brand prioritized “Building Through the Eras,” an ad focused on its runaway hit Forge of Empires, which was released in 2012. In total, the brand ran its ads 1,185 times, generating nearly 120 million impressions on national TV. These ads appeared during NASCAR 120, MLB Tonight, and the 2016 Tour de France.