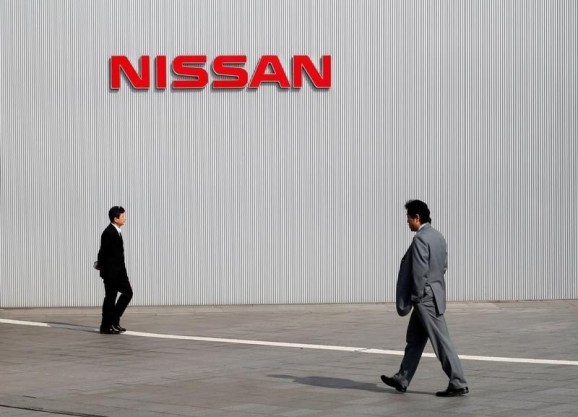 Men walk past a Nissan Motor Co logo at the company's global headquarters in Yokohama, south of Tokyo February 9, 2011.

(Reuters) – Nissan is in talks with Panasonic and overseas companies including Chinese firms over the possible sale of its controlling stake in a car battery manufacturing venture, sources said.

Two people with knowledge of the matter said on Saturday that the Japanese automaker wants to sell its 51 percent stake in Automotive Energy Supply Corporation, which makes lithium-ion batteries for electric vehicles. The company is jointly owned by NEC.

The Nikkei daily on Friday reported that Nissan was looking to sell the company because it would be cheaper to buy batteries for its electric vehicles including its Leaf model from other makers. The newspaper did not say where it obtained the information.

Talk of the sale “is speculation, and is not based on any announcement by us”, Nissan said in an email. Spokesmen for Panasonic and NEC declined to comment.

Competition to supply batteries for electric vehicles is heating up due to expectations that a growing number of lower emission cars will be produced in the coming years.

Tesla, which currently procures batteries for its electric vehicles from Panasonic, is planning to boost its total vehicle production to 500,000 in 2018 – two years earlier than its original target.

Nissan and Renault SA, under Carlos Ghosn, who heads both companies, have bet more heavily on electric cars than mainstream competitors. In 2009 the two companies pledged to invest 4 billion euros ($4.43 billion) to build models including the Nissan Leaf compact and as many as 500,000 batteries per year to power them.

Sales of the Leaf and those of other electrical vehicles, however, have been disappointing, meaning Nissan and NEC have been unable to lower battery costs through mass production.

Reuters reported in 2014 that Ghosn was preparing to cut battery production by AESC and instead use packs made by LG Chem.

Nissan is also in the process of selling its 41 percent stake in auto parts supplier Calsonic Kansei, sources have told Reuters.

In May, the automaker agreed to buy a 34-percent stake in Mitsubishi for about $2.2 billion as it seeks to better compete with bigger rivals such as Toyota and Volkswagen.