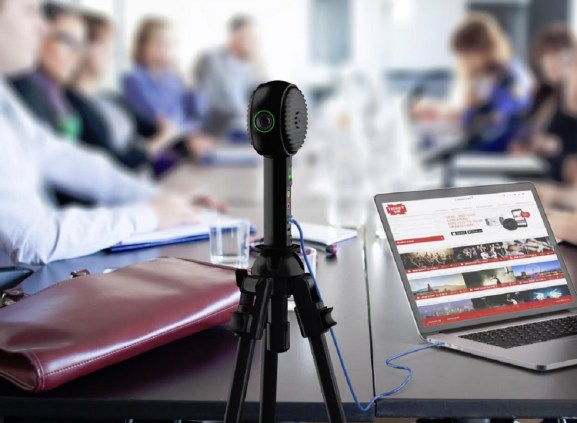 Berlin’s I-mmersive has unveiled its all-in-one 360-degree virtual reality video streaming solution. The company has launched an Indiegogo crowdfunding campaign to raise money to launch a bundle of three products: the Veye 360-degree VR camera, a base stand, and a cardboard Go viewer for a smartphone.

The 4K camera has an ultra-portable design that allows you to stream live VR photos and videos. It is compatible with social media platforms such as YouTube and Facebook.

The company is trying to raise $35,000 on Indiegogo in the next month. The camera will come with an app, and it will allow users to monetize and connect with an audience for streamed live events. I-mmersive says it can stream with no stitching or post-processing, using 4K resolution.

The Veye camera has 1/1.8 Sony sensors, high-grade aluminum, and I-mmersive’s own encoding software. It has two 220-degree fish eye lenses, built-in microphones, and a server connection. Both the camera and base stand have standard tripod mounts.

The company also has a web portal and mobile app that let you control the Veye, create a stream, and consume content, and the cardboard Go viewer offers a cheap way to view mobile VR on a smartphone. The mobile app is compatible with all VR viewers, and the company is developing apps for the HTC Vive and Oculus Rift VR headsets.