Game and app developers need to know where to spend their precious user acquisition dollars. So they should be happy to hear that mobile measurement company AppsFlyer has determined which mobile advertising media sources deliver the best results.

And, no surprise, Facebook continued to dominate as the top media source in mobile ads in the first half of 2016, according to the AppsFlyer Performance Index, which is a neutral source as a mobile measurement company. AppsFlyer said Facebook delivered “unrivaled scale and impressive retention on both iOS and Android.”

Facebook’s retention score moved three spots up the iOS global ranking, hitting the No. 2 position, while on Android it dropped one spot, landing at No. 3. In the power rankings (combining the number of installs and retention score), Facebook was the clear leader across all regions and platforms, except on Android Europe, where it came in third.

Meanwhile, Google climbed two spots to the No. 1 position in Android global retention, and it rose one spot to second place in the power ranking. On iOS, Google remains No. 6 in retention globally while it rose two positions to reach third on the power rankings.

AppLovin, which runs a programmatic-driven network, rose seven places on Android to No. 3 in the power ranking. In fact, the company climbed 11 spots across three regions (Asia, Europe, and Latin America). On iOS, it went up one spot to reach second place in the power rankings, despite a drop in retention across regions.

AppLift saw the highest lift In retention. The Berlin-based global network went up an impressive 11 spots on Android and eight spots on iOS. Twitter lost its top global Android retention spot, falling to No. 2. But it has seen significant improvement in the global iOS index, rising eight spots to No. 5. Twitter’s power ranking is pretty weak, at No. 16 on Android and No. 12 on iOS.

Video ad networks saw a surge. Vungle, AdColony, and Unity all climbed four spots in Android global retention, proving that when a player views a video preview of a game, there are fewer negative surprises about that game, leading to improved retention. On iOS, only Unity had a four-spot climb. But overall, the video networks performed exceptionally well, coming in at  No. 1, No. 3, and No. 7, respectively (compared to No. 6, No. 5, and No. 8 in retention score indices).

About 60 percent of the media sources in the gaming indices are global while the rest are local (with traffic in only one region). Local networks also underperform compared to global networks, with only 12 spots in top 10 regional retention scores.

The AppsFlyer Performance Index measures the performance of more than 4 billion installs worldwide across 1,000 media sources. 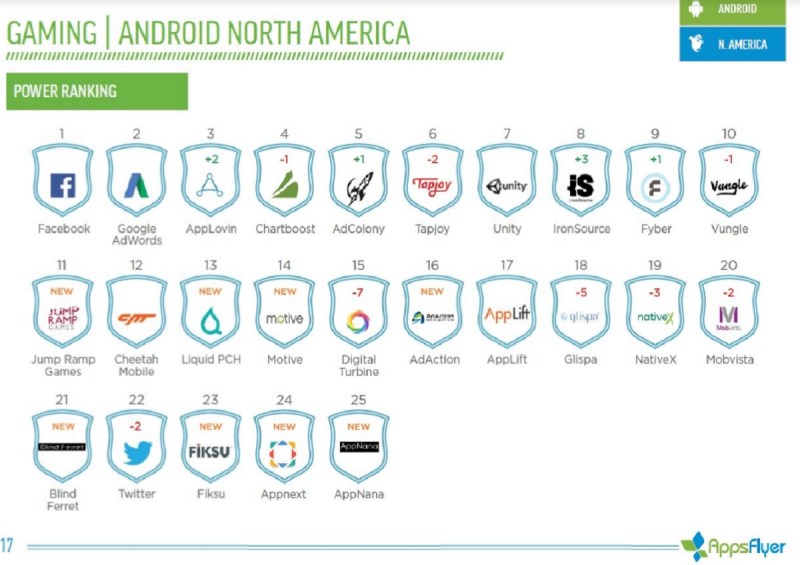 Above: AppsFlyer rankings of the top North American channels for the combination of downloads and retention.