Facebook has launched two new creator tools designed to give publishers additional insights into how people respond to their 360 videos. More than 250,000 videos with this capability have been uploaded to the social network since September, and as adoption continues to increase, there’s going to be a need to give creators information about what’s performing and how to make adjustments to have a better experience for people.

The first tool is called Guide and is essentially a “map” to help people navigate through a 360 video as it plays. Facebook claims that it’ll allow for a “lean-back experience” and you will “never miss a key moment.” It’s similar to annotations within YouTube, where you can bookmark key moments in a video. “People who view your video will automatically be directed around the video as it plays, ensuring that they don’t miss the action,” the company explained in a blog post.

To use it, the first thing to do is check the box that states your video was recorded in the 360-degree format. Within the 360 Controls tab, enable the guide and watch your video from start to finish, identifying the parts that you’d like to highlight. When you find one, select “+ Add Point” and insert it into the guide. 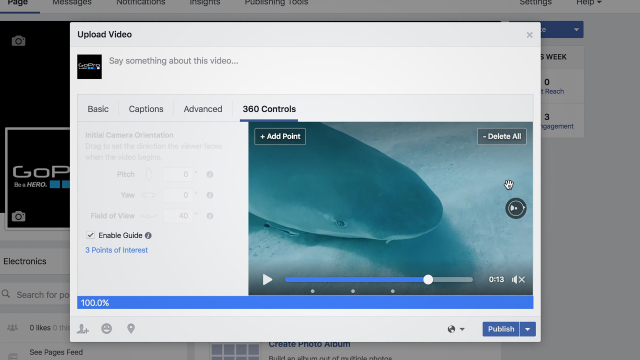 Above: Facebook’s guide tool for publishers around 360 videos.

Facebook’s Guide tool is turned on by default, and when your video hits one of these points of interest, it’ll automatically pan around that point. Viewers can disable this by panning out or swiping out of a scene. Facebook said that some of the videos enabling guide include a GoPro video of swimming with sharks, a New York Times clip featuring Jamaican sprinter Usain Bolt’s 100 meter sprint at the 2008 Olympics, and ABC News’ cruise around the New York City harbor.

The second tool Facebook launched is geared specifically to help publishers know what people find the most interesting. It relies on a tool a few analytic tools use: heatmapping. It’ll display specific portions of a video where people have spent the most time watching. The company explained that it’ll pull “aggregate data of our view ports, measuring every time your viewer moves [30 degrees] within the scene.” The expectation is to use heatmapping as a tool complementary to Guide for informing viewers of the best things in a video. 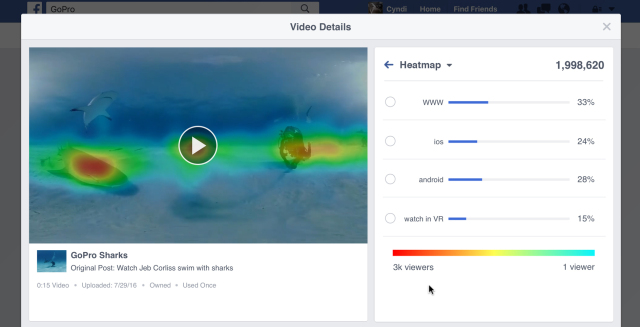 This tool will be available for any video posted to Facebook after May 1 that has more than 50,000 unique viewers. Publishers can enable heatmapping by visiting the Video Library under Facebook’s Publishing Tools and selecting the video they want (as long as it’s eligible). Heatmap is under the video insights tab for that video.

It’s worth noting that while Facebook does support 360 photos, Guide and Heatmap are only for 360 videos, so you also won’t be able to use it for regular movies uploaded to the social network.

The battle around 360 videos is certainly heating up (no pun intended) with not only Facebook supporting this format, but also YouTube, Flickr, and likely more in the future. And creating these videos isn’t something that only professionals can do now — devices that allow the average person to create their own content, such as the Ricoh Theta and Samsung’s Gear 360 camera, have flooded the marketplace.

With Facebook’s strength in this area and leadership within the virtual reality space thanks to its ownership of Oculus, the company could be following a playbook that YouTube had years ago when ordinary videos first were shared en masse on the internet. But this time around, it’s Facebook seeking ownership of 360.