The White House announced today that President Obama will use a Facebook Messenger bot to receive correspondence from citizens. People who send messages to the White House Facebook page will now speak with the bot. Those messages will be considered among letters read by the president.

President Obama has read 10 letters a day since entering office in 2009, he said. Until now, letters could be sent in the mail and messages through the White House website. White House Director of Presidential Correspondence Fiona Reeves chooses the letters the president reads every day.

As with paper letters, there is virtually no limit to the size of the message you can send the president’s bot. Unlike a paper letter, the bot asks if you want to add to your note each time you send a message.

The sender’s phone number, address, and email address are also requested, in case the president or White House want to contact message senders. The personal information collected will not be used for any purpose unrelated to presidential correspondence, a White House spokesperson told VentureBeat via email.

You cannot yet tell the president how you feel with a GIF or emoji. The president’s bot only accepts text. 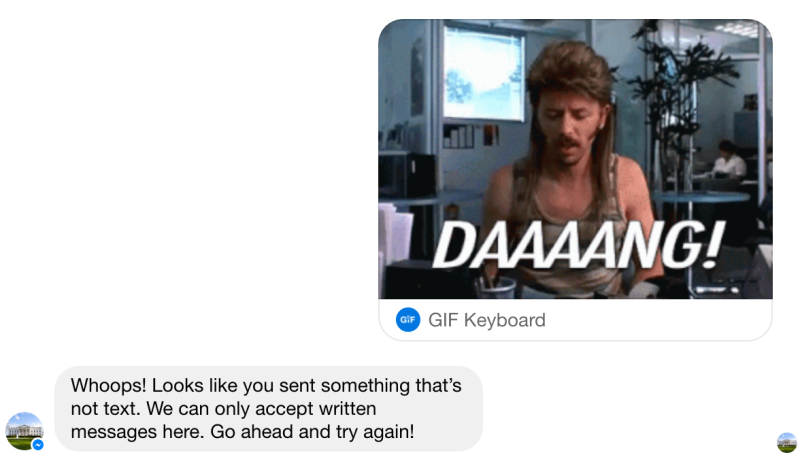 The president does not currently have plans to extend his bot to other platforms like Skype or Slack, a White House spokesperson told VentureBeat.

Among instances of the Obama responding to letters he receives, in 2015 the president replied to a girl from Massachusetts who didn’t understand why there are no women on U.S. currency. Earlier this year, a letter from a little girl hit by the water crisis in Flint, Michigan — who became known as Little Miss Flint — prompted a visit from the president.

“…what’s interesting is not only do these letters help me to stay in touch with the people who sent me here, or the people who voted against me,” said President Obama in a White House blog post “but a lot of times they identify problems that might not have percolated up through the various agencies and bureaucracies. And more than once there have been occasions where these letters inspired action on real problems that are out there.”

Update 9:34 a.m. Aug. 10, 2016: This story was modified to include details received from the White House after publication related to the collection of personal information and the possibility of the bot being added to chat apps other than Facebook Messenger.