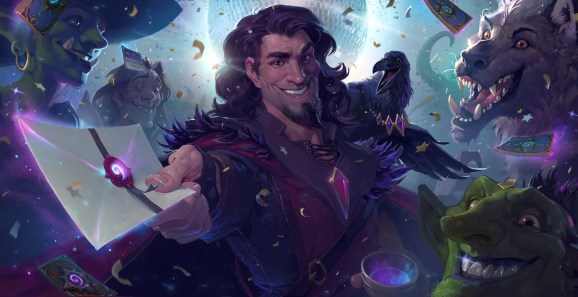 One Night in Karazhan.

Hearthstone: Heroes of Warcraft’s newest adventure just launched, and we’re here to help you beat it and earn those new cards. This week gives us the free prologue and the first wing, The Parlor. Each includes a series of bosses with special rules and abilities, but our guide will help you best them. Above: An uninvited guest.

You play this game as Medivh (his younger version, not the portrait alternate for the regular Mage class). He has a premade deck and a Hero power that lets him draw three cards for just 2 mana. He has special spells like Arcane Power, which gives you +5 spell damage for a turn, and Mysterious Rune, which puts 5 secrets in play for 3 mana. You can even get the 1 mana Astral Portal, which summons a random Legendary minion. Archmage’s Insight costs 3 mana and makes all of your spells cost 0 mana for the rest of the turn. You both start with 30 armor.

Those 6/6 Abyssals can overwhelm you, so you’ll want some strong spells to fight back. When you start, mulligan any cards with weak effects like Arcane Missiles, which deals 3 random damage. Use your Hero power a couple of times so that you have Archmage’s Insight and some other powerful spells that can quickly give you an advantage in one turn. You’ll become overwhelmed by Malchazar’s board unless you can use those free spells to create some huge turns.

Basically, use your Hero power and play a lot of spells, and you’ll be fine. Above: They can sing, they can dance.

Those Plates are pretty harmless on their own, but other cards can make them more powerful. The 3/1 Fork gives Plates the Charge ability, while the 2/1 Cup gives them +1 attack. You’ll want to try to destroy the Plates before that can happen, either by outpacing its board with your own minions or by using Hero powers that deal 1 damage (like Mage, Rogue, or Druid).

That’s basically it. Use minions, board clears, or your Hero power to keep the Plates from getting out of control, and you’ll easily beat the Silverware Golem. Above: Who’s the most aggressive of them all?

Passive hero power: Reflections (Whenever a minion is played, summon a 1/1 copy of it.)

The Magic Mirror’s Hero power works for both sides. Whenever it summons a minion, it’ll get a 1/1 copy. When you play one, you’ll also get a 1/1 clone. You can use this to your advantage by playing minions with strong Deathrattle effects. You can also play a deck with a lot of cards that give you a bonus to Spell Damage, since the cloning trick gives you double.

Make sure you keep some board clears in your deck, since you’ll want some help killing all of those weak minions. Most of its cards are weak and give a bonus to Spell Damage. Just try to clear them out when you can to keep its Spells from being too strong. Again, Hero powers that deal 1 damage can help here, but you can also win just by outpacing him on the board (which is easier than normal thanks to that Passive hero power). This is another game that you play with a premade deck. This is one of the more interesting encounters ever in Hearthstone. Many of the minions won’t attack until the end of your turn, and they’ll only deal damage to the enemy in front of them (either a minion or, if there are none, the hero) without taking any damage in return. If a piece is between two enemies, it’ll hit them both. That’s ideal, so try to make sure you have enough minions so that happens (even if it means having fewer on the board than your opponent).

Just like in real chess, positioning is important here. Remember that the opponent can use Cheat to kill your left most minion, so try to keep your weakest on the left. Keep your strongest attack minions on the far right, since they’ll be most likely to attack the enemy hero.

The White Knight is one of the few cards that doesn’t auto attack at the end of the turn. It’s a 4/3 minion with Charge that can’t attack the enemy hero. It’s useful for taking out an enemy piece, but make sure you don’t use it and accidentally make your minions perfectly line up with the opponent’s board.

Your Hero power lets you Discover a chess piece for 2 mana. Use it only if you don’t have a good option to play that turn, or if playing a Minion instead aligns your pieces with the enemy.