There are stock photo platforms that cater to just about every scenario, but a young London startup has been hard at work over these past few years as it vies for its piece of the lucrative photo-licensing pie.

Picfair is the handiwork of Benji Lanyado, a former travel writer for the Guardian and the New York Times, who left the journalism business to teach himself how to code through General Assembly. After a year of study, in 2013 Lanyado launched Picfair in beta to take on the mighty Getty and Shutterstock. Picfair differentiates itself by letting anyone upload their snaps and decide how much they should sell for. It is effectively a subscription-free marketplace that matches media companies and publishers (or any photo-hunter) with photographers — from amateur Instagrammers to professionals.

A little more than three years later, Picfair has just seen its three millionth image uploaded, a milestone that coincides with the platform’s relaunch this week — with a fresh design and a focus on buyers. 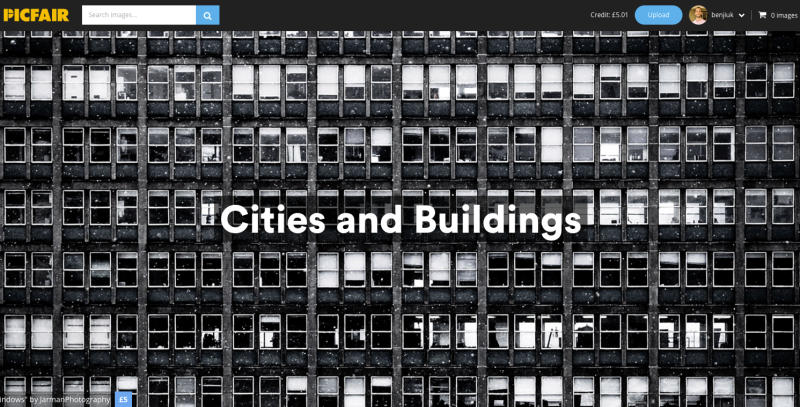 Above: The new Picfair

In its original guise, Picfair largely targeted photographers in terms of the interface layout, but now the company wants to make it easier for publishers to find the photos they’re looking for.

“No one has ever pulled off properly quantified (and monetized) user-generated content,” said Lanyado, in an interview with VentureBeat. “While we’ve been pushing hard for liquidity on the supply side with images, we’ve also been honing version two of our ever-developing ‘picked’ image curation algorithm — the bit that curates images agnostically, regardless of whether you’re an Instagrammer or a Pulitzer winner.”

In its short lifespan, the company has been focusing on building its library and fine-tuning its algorithms, but Picfair has already picked up “thousands of buyers,” according to Lanyado, including Rough Guides, Esquire Magazine, Medium’s in-house editorial team, Jack Daniel’s, Etihad Airlines, and “hundreds of other global brands.”

“Most of our photographers had never sold an image before joining Picfair, and from today, we’re turning our focus to selling their images at scale,” said Lanyado. “Our photographers are the most powerful ace in our pack, and they’ve already helped us spread across the globe. We only make money if they make more — nobody else can say that. It’s powerful.”

Above: The new Picfair

Much has changed at Picfair in the three years since launch. The company has grown from a one-man band into a lean nine-person Shoreditch startup, with a handful of notable backers on board, including Reddit cofounder Alexis Ohanian.

As part of his General Assembly course work, Lanyado designed and built Reddit Edit, a kind of souped-up version of Reddit that Ohanian got wind of and subsequently tweeted about. This led Lanyado to hunt the Reddit man down and successfully pitch him Picfair in a New York coffee shop. “It was his first non-U.S. investment,” said Lanyado.

The Ohanian investment formed part of a $500,000 seed round in 2014, which also saw investments from Google Ventures’ Tom Hulme, the executive team behind Voucher Codes, and a handful of other individuals. This initial cash injection was topped up by around $400,000 a year later from a number of new investors, with another “small round” recently closed.

Picfair likes to tout the simplicity of its business model and royalty structure. The photographer sets their own price per photo and keeps the full amount, with Picfair adding on a 20 percent charge that’s swallowed by the buyer. “Our model is revolutionary, even though it shouldn’t be,” said Lanyado. “The old-school agencies started the trend of taking the majority of royalties away from the photographers in the ’90s, and the next wave just followed suit — the average middleman take is now 74 percent.”

Photo licensing can be a minefield in terms of knowing what an image can / can’t be used for, with different prices in place depending on the scenario. What Picfair promises is simplicity, with a single license that covers everything other than commercial use (e.g. a TV advert or giant billboard), though this is an area they’ll be addressing shortly.

“We’re introducing an advertising and merchandising license soon — we believe photographers should be paid significantly more for this kind of use,” said Lanyado. “Eventually, we’ll have three licenses that cover every single possible image use — a dramatic reduction on the 300,000-plus different ways there are to license images elsewhere.”

It’s worth noting here that Picfair is entirely web-based, with no mobile apps — though Lanyado says plans are afoot to introduce native mobile apps for photographers to upload and manage their wares.

Obvious “rivals” in the stock image space include the likes of Shutterstock, which is currently doing interesting things around machine learning, and the mighty Getty, which blazed a trail to the top of the stock image food-chain in part through aggressive acquisitions of smaller companies. Picfair is fish fodder in comparison to such companies, but Lanyado reckons his company has one thing that none of its competitors have: “Photographers who love us,” he said. “Seriously. By giving established photographers full control of their images, the fairest revenue cut in the industry, and by giving new photographers access to a market they’ve been previously excluded from, we’ve grown totally organically through the photographers themselves.”

More than half of Picfair’s sales so far have been through referrals from its photographers, according to Lanyado, and despite Shutterstock’s billion-dollar market cap and plush Empire State Building headquarters, Lanyado insists his company has the love of the photographer on its side. “We’ve seen photographers building their own banners and widgets, integrating us into their own CMS systems, and even just redirecting their entire websites to us,” he said. “We don’t even supply any of the tools for them to do this yet, they’re doing it themselves.”

A number of similar startups have sprung up in recent years such as EyeEm and 500px, and they have since gone on to raise around $50 million between them. With less than $1 million to its name, and Britain’s vote to leave the European Union lingering like a bad odor in an elevator, startups such as Picfair will have to be shrewd. But in many ways, “Brexit” forces Picfair to continue operating in the same way as it has done so far, with next to no money spent on marketing and a reliance on word-of-mouth.

“The emphasis now is to keep burn low and be super-lean and focused,” said Lanyado. “Inadvertently, it’s one of the positive lessons of Brexit. Early-stage companies like Picfair need to be cockroaches rather than acting like unicorns.”

It’s maybe not the best time to be a fledgling startup in the U.K., with so much uncertainty in the air, but Lanyado remains hopeful that his company will emerge as one of the fastest-growing image licensing companies in Europe. “I want Picfair to become the default place for a talented amateur photographer to sell their first image,” he said.