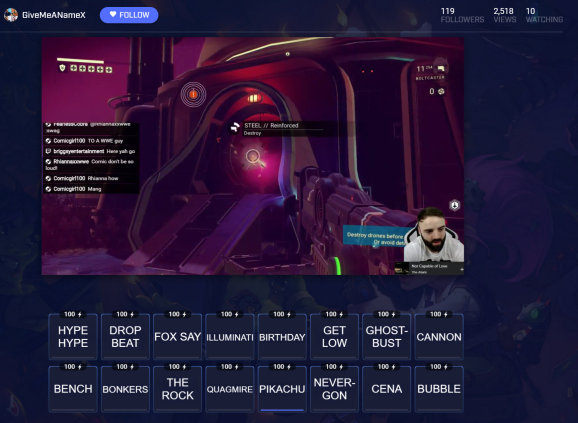 Livestreaming a PlayStation 4 game to Beam with chat interactions.

Microsoft wants to add something extra to video livestreaming on the Xbox One, and today’s move will enable this to happen.

The company revealed this morning that it has acquired low-latency interactive livestreaming service Beam. Through Beam, viewers can interact and influence the broadcasters game in real time. Twitch and YouTube have turned gaming-related video into a huge category on the web, but those are primarily passive experiences with delayed chat interactions. Beam sets itself apart in the $3.8 billion gaming-video market by offering up live video that has almost no perceptible delay in reaching the audience. This enables those instantaneous interactions that are not possible with 10 second delays on Twitch and YouTube.

Beam will continue to work as it always has, with people livestreaming content from any platform — Xbox One, PlayStation 4, PC, and more. But this integration with Xbox means that Microsoft may help build some hooks into Beam that enables players to easily set up interactive livestreams.

Beam works with consoles right now, but the interactions are limited to mostly chat actions. In a PC game, like Minecraft for example, players can have viewers randomly spawn enemies or give the player a bonus. Beam support on Xbox One could enable that for console games.

While Microsoft is getting in on a variation of Twitch with Beam, interactive livestreams are not new. Twitch popularized the idea with concepts like Twitch Plays Pokémon. That broadcast has hundreds of players entering chat commands to collectively beat the pocket-monster games. Since then, releases like Choice Chamber have built entire concepts around this sort of interaction.

The difference with Beam is that the reduced latency, typically less than 200ms, enables the audience to have much broader control over the action. While 200ms is probably too long for the crowd to competitively pilot a character in a fighting game or a shooter, it is more than quick enough for everyone to vote on the action to take in something like a Telltale adventure.