SeatGeek is the latest ticketing company to spread its proverbial wings with the launch of a new primary ticketing platform for rights-holders.

Founded in 2009, SeatGeek has hitherto served as a marketplace and aggregator for tickets sold elsewhere, and it recently opened up to let anyone resell their tickets too. But the New York-based company has never really targeted the original ticket-sellers (i.e. the rights-holders) directly. Today, however, it rolls out SeatGeek Open, which it touts as an “open platform” that will “power a modern box office that is mobile, flexible, and widely accessible.”

The main kicker compared to the competitors, according to SeatGeek, is that it doesn’t impose restrictions on how people can purchase and transfer tickets — performers, artists, and their representatives can sell their tickets through any website or app. So rather than simply allowing artists to sell their tickets through SeatGeek, it’s launching an API that third-party companies can implement anywhere. SeatGeek provides an example use case: a sports team may wish to sell tickets through Uber, and Uber may be keen on this as it can then sell rides to the venue. And if it’s an UberPool ride-share, then Uber can also ensure that fans participating in the journey follow the same sports team.

To be clear, Uber isn’t on board for this launch, but it gives some insight into how SeatGeek envisages this new product being used. The API could equally be used to sell tickets through an artist’s own website, Facebook Messenger, Amazon, or elsewhere.

It’s an interesting proposition for sure — Facebook has increasingly touted Messenger as a platform for third-party vendors, and with a billion users it would be crazy for merchants to ignore platforms that have such significant traction. SeatGeek makes it easier for ticket-sellers to take advantage of the huge platform.

Additionally, SeatGeek says it’s also making it easier for fans to transfer their tickets — for example, to a coworker through Slack — while it’s also promising that verification technology for ticket resales will be made available to third-party sellers, including StubHub and Gametime. This is designed to give peace of mind that a ticket is genuine and will work at the gate. 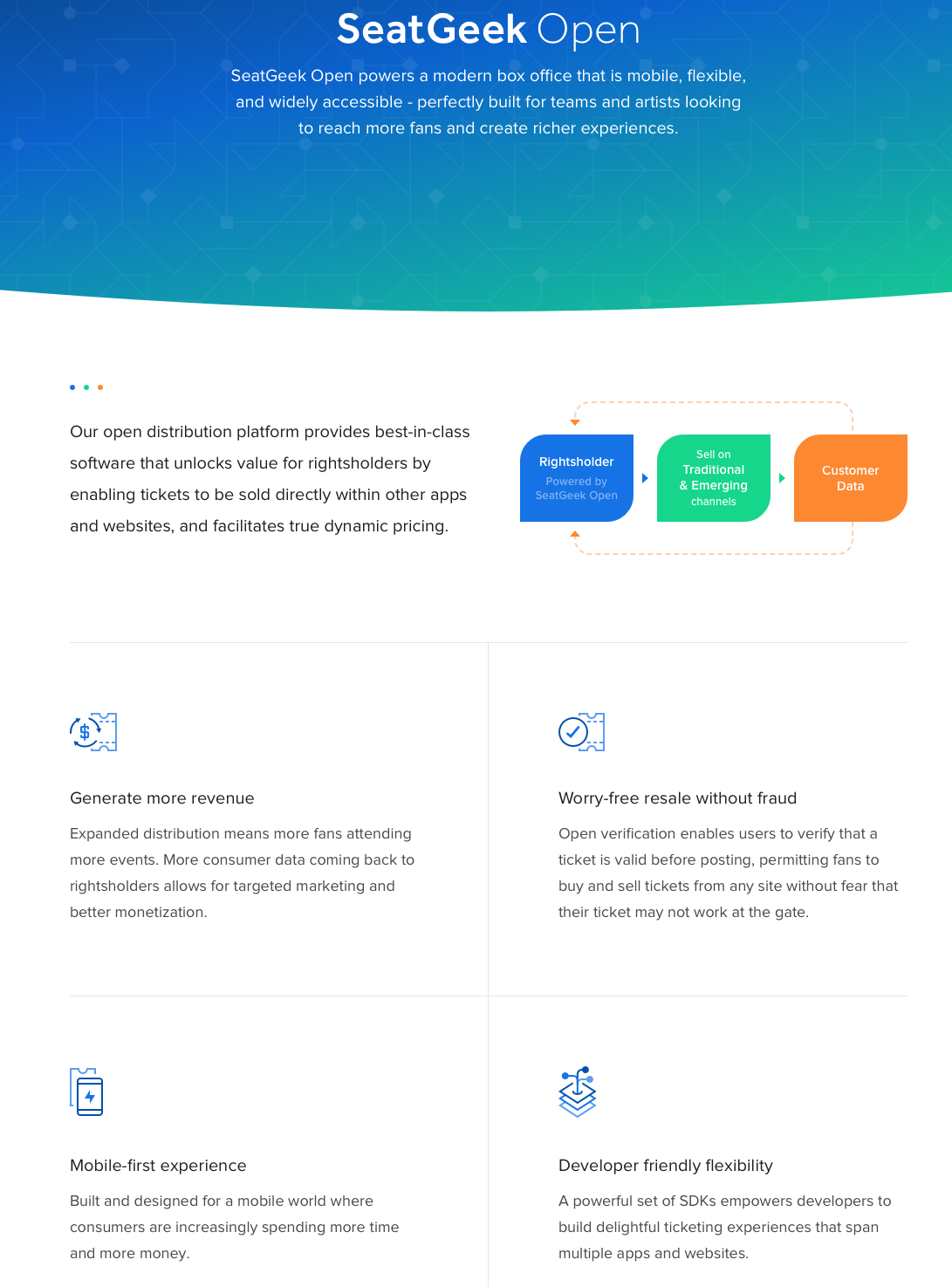 Today’s news comes six months after StubHub announced it was shaking off its secondary-ticket shackles and going for Ticketmaster’s jugular in the primary realm. SeatGeek’s approach is, of course, different insofar as it’s not looking to create a silo on its own website — it wants to power ticket sales across the internet on websites and in apps.

However, the timing of the announcement is notable given that Ticketmaster recently unveiled its very own public APIs to enable sales through third-party services. To the untrained eye the general idea behind Ticketmaster’s product seems almost identical, but SeatGeek is adamant there are a couple of key differences. One, Ticketmaster isn’t opening its API to anyone that wants access to it, such as other ticketing outlets like SeatGeek. “We would not require any partnership for a company to use our API — any company that wants to use the SeatGeek Open API can do so,” SeatGeek cofounder Russ D’Souza told VentureBeat. “In our model, we want to truly increase access, and won’t prevent anyone who wants access to get it.”

Additionally, SeatGeek is opening barcode verification on tickets to any of its partners, meaning that buyers and sellers can check the veracity of a ticket before any money changes hands.

While the API itself will be free to use and open to anyone, SeatGeek will monetize the good old-fashioned way — through taking a cut on any primary tickets sold through the SeatGeek platform. The company wouldn’t reveal how much that is, other than it being “industry competitive.”

SeatGeek first teased its new primary platform a few weeks back when it announced it was to be the official ticketing partner for Major League Soccer (MLS), with Sporting Kansas City the first team to use the technology from the start of the 2017 season.

“Ticketing has long been a closed industry, and one that hasn’t been positively impacted by the power of technology in the same way many other industries have,” explained SeatGeek cofounder Jack Groetzinger. “We believe the open ecosystem we’ve built will transform the way people access tickets, allowing fans to go to more live events and teams and artists to reach more fans.”