All of the people that complained about the original Titanfall’s lack of a story-based solo mode should get excited about the sequel.

Electronic Arts showed off Titanfall 2’s single-player campaign earlier this month with a hands-off demo that featured moments from the shooter’s beginning and middle sections. The original just had a multiplayer mode. Even its story-based campaign had to be experienced in competitive matches online. Now, players are getting the single-player experience that many wished for in the sequel, which comes out on October 28 for PlayStation 4, Xbox One, and PC.

In some ways, it’s what you’d expect. You’re shooting stuff, wall-running across gaps, and you have your own robot Titan that you can use.

But it also had plenty of surprises, like dialogue options, a slower pace that often focused more on platforming and puzzles than on shooting, and even a decent sense of humor (at one point, the main character took a tool from a robot with a digital happy face on his chest … which quickly turned into a pathetic frown).

GamesBeat interviewed Mackey McCandlish, the single-player lead designer for Titanfall 2 at developer Respawn. We discussed the inspiration for this mode, why the original Titanfall didn’t have one, and this newfound sense of humor. 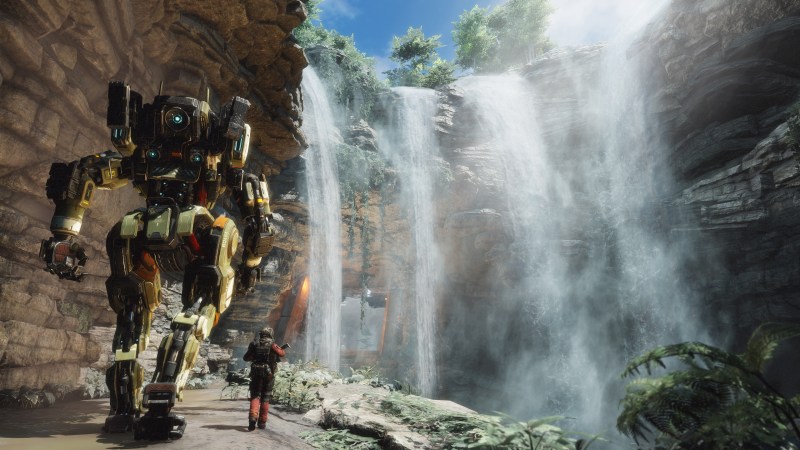 GamesBeat: With these sort of campaigns for multiplayer-heavy shooters, we expect that Call of Duty model — the  on-rails, linear shooting gallery. That wasn’t the approach you went for here. Was there anything that inspired you to go in that different direction?

Mackey McCandlish: We’re inspired by a lot of different games. We have a lot of tastes across the studio. The design team has been inspired by the Valve games for a long time. We always looked for ways to bring a sense of pacing to our games.

With this one, while there’s still a military aspect to the game, the focus of the story is on the relationship between the pilot and his Titan. That precludes having so many characters around you, distracting you from that story. The motion model, with the freedom it brings — for us to stay true to that motion model required us to loosen up the restraints a bit. A lot of work went into figuring out how to translate that motion model into a campaign context.

GamesBeat: I was surprised to see dialogue options. Is that there to help people have a bigger attachment to the Titan character?

McCandlish: That feature grew organically out of the challenge of taking a story about a pilot and a Titan and making it successful within a campaign. There’s a trend in games to have your character speak. That can be disconcerting when your character says something you aren’t thinking. Typically the character is going to be giving information to help you understand the world that you as a player may not have.

We were both looking for a way to strengthen the relationship between the pilot and the Titan, but also to bring more of the lore to the game, without being distracting. We stumbled into this interesting tool where you get to opt in to the conversations. You get to customize how you want to approach them and make it the Jack Cooper that you want, as opposed to having it totally written for you. It wasn’t something planned, but it’s worked out well for us.

GamesBeat: In the first game, you could call several Titans during a match. They were disposable weapons. Here, we have just one Titan, and he has a personality. You talk to him. Why that change in direction?

McCandlish: The original game’s idea was to fit a multiplayer gameplay loop of fight as a pilot, call in your Titan, beat people up, eject, fight some more, get a new Titan. It was this pilot-Titan loop. With the single-player here we’re teasing out the threads of those loops and building entire missions around them, missions that are more pilot-focused or more Titan-focused. More mobility-focused or more combat-focused. There is no — it would almost be to the detriment of the single-player if it had to constantly have Titans raining from the sky. That would limit the kinds of missions and stories we could tell.

McCandlish: Well, I think we were excited that people felt like they wanted to learn more about our universe and our lore. There was a desire there for a campaign, or a real story. That was good. I’ve never had any doubts that the consumer wants a single-player game. The people who say “we don’t need single-player” are loud people online that play a lot of multiplayer. Those people may not need single-player, but the quieter, wants to play by himself person, the one who’s not so loud and not being heard, they still want a single-player game.

I haven’t been worried about whether or not people would want to play a single-player. At the same time, I’m excited that there’s been games that are successful as multiplayer only. That’s good for those games too. I’m glad we were able to lead a charge in that direction.

GamesBeat: Titanfall did have that campaign multiplayer mode. Were there lessons you learned from there that you’ve taken to this single-player campaign?

McCandlish: The campaign showed how it can be challenging to follow a story in the context of a multiplayer match. It helped us understand the limits of storytelling within a multiplayer game. At the same time, it helped us understand where the designers’ different strengths are as far as this person — look how effective they can be making a campaign level. Is it really the best use of their talents to have them adding a story element to a competitive match?

GamesBeat: It seemed like a cool, worthy experiment, but something that didn’t quite stick.

McCandlish: From an actual numbers side, it was surprisingly popular with people. There’s something there. It’s just maybe not worth putting all that campaign energy in and not getting a real play-by-yourself campaign out of it that’s easier to follow.

GamesBeat: Another thing that surprised me about the demo was the humor. In Titanfall, you didn’t think “funny.” When I recall the story beats in that campaign, it was very military. You’re having more fun here.

McCandlish: This team has a foundation of interest in grounded, real-world military. We’ll always have that. At the same time, looking for those opportunities to bring some humor to it is important to us, because it makes for a richer universe. We had the Marvins in the first game. They’re kind of here and there doing their little jobs. But having a campaign lets us take those things farther and shine a spotlight on them that they normally wouldn’t have the bandwidth to enjoy, because there’s bullets going by your head all the time. 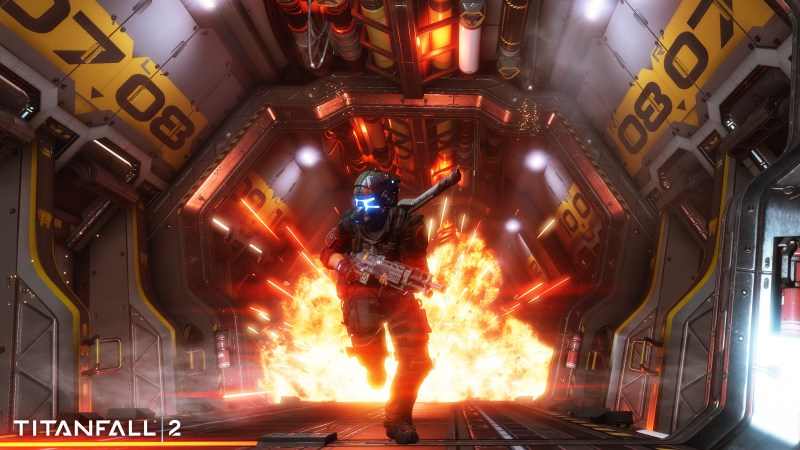 GamesBeat: Is it an exciting opportunity for you guys? A single-player campaign gives you more room for creativity.

McCandlish: It lets each individual designer, or the different people from different departments, work on the part that’s more interesting to them. Each mission is so different from every other mission. They’re each an opportunity to take a part of Titanfall and expand on that particular element. Somebody might be working on this type of level while someone’s working on another one, and it’s almost like they’re making completely different experiences, but they fit together in the same game.

GamesBeat: It seemed like the moment that really sold me on the campaign was a conversation between the pilot and his Titan. You had that comedy beat, where the Titan was going to throw him across a ravine and talking about how there was a 30 something percent chance he might miss. It’s a funny scene. Right before he throws you, he says, “Trust me.” And I’m like, yeah, I kinda do want to trust this guy. It seems like you guys are on to something here. I wonder if that’s a feeling you guys had, some excitement about what’s happening. This isn’t just going to be a token single-player campaign.

McCandlish: Oh, for sure, it’s not. It was a heart-wrenching decision to not do a single-player on the first game. That was out of necessity, to ship a quality product on time. There’s a genuine desire from the team to bring a story and a campaign to the universe.

GamesBeat: We saw a lot of pilot stuff. We got a taste of the Titan combat. Is that representative of the campaign, where more time is spent being a pilot and the Titan is more for those sparser, bigger fights?

McCandlish: I’d say it varies mission to mission. There are certain general ratios we were going for, but it plays out very differently from one level to the next.