Xperiel announced today it has raised $7 million for a platform that uses mixed reality technology to connect the digital and real worlds.

Working to facilitate a Real World Web (RWW), Xperiel makes it easy to build augmented reality experiences — such as a baseball card that triggers a puzzle app on your smartphone or a stadium monitor that recognizes you as you walk into the venue.

The Sunnyvale, California-based company is targeting sports teams and stadium owners as its initial customers. It is backed by original Google investor Ram Shriram, as well as the Los Angeles Dodgers, Major League Baseball, and Sun Microsystems cofounder Andy Bechtolsheim. Customers include PepsiCo and the Dodgers. While the emphasis today is on sports brands, the platform could be used for various Internet of Things applications, from commerce to home automation.

“We are making the real world digitally interactive,” said Alex Hertel, CEO of Xperiel, in an interview with VentureBeat. “It’s analogous to the World Wide Web and what it did for the internet. We are bringing the real world to life, so consumers can interact and use their device as if it were a mouse cursor on the world.”

Xperiel and its Real World Web came from the minds of brothers Alex and Philipp Hertel, former Google engineers who cofounded the company. It will use the money to further advance its cloud-based platform, a key component needed to deliver mixed reality experiences to consumers through the RWW. Additionally, the company plans to grow its sales, marketing, engineering, and leadership teams.

The goal is to create mixed reality experiences that unify the physical and digital worlds. The platform provides the tools for building and hosting RWW applications, making it possible to connect hardware and software with real-world objects that consumers can then access with any connected device — like scanning a ticket and getting a baseball card on your smartphone.

Hertel noted that the forecast for marketing spending in the U.S. is $187 billion.

“We could address other verticals, like commerce, education, consumer electronics, information technology, and home automation,” Hertel said. “We built a platform that is the orchestration layer for the Internet of Things to bring the Real World Web to life.”

“Return on investment in digital infrastructures and brick-and-mortar facilities has reached a plateau, forcing organizations to seek new ways to increase revenue and customer lifetime value. The IoT could unleash billions of dollars worth of unrealized economic potential, but until Xperiel, no one had created the radical technology required to make this a reality,” said Brad O’Neill, Xperiel founding investor and senior vice president at SurveyMonkey, in a statement. “The Xperiel cloud-based platform is a game-changing innovation. By orchestrating interactions between any physical, digital or IoT-connected asset, Xperiel has introduced the engine to power the Real World Web.”

The Hertel brothers also created Walleto, which was acquired by Google to form the basis of Google Wallet. Alex Hertel is CEO and Philipp Hertel is chief technology officer. Xperiel is an offshoot of their doctorate research, conducted at the University of Toronto in 2008 under the tutelage of Turing Award winner Stephen Cook.

They want to enable brands to deliver memorable, interactive experiences that increase fan engagement, reward brand loyalty and participation, and improve sales. The idea is similar to a scene in the film Minority Report in which actor Tom Cruise walks into a store, and the store display recognizes him and recommends something for him to buy.

Xperiel has created a patented, graphical programming language that makes it simple for non-programmers to create apps that take advantage of the RWW platform. Hertel and user-interface designer Connie Tang, who is the company’s chief development officer, showed me some simple apps that Tang, who isn’t a programmer, created in just 15 minutes.

“Technology today is largely inadequate when it comes to addressing how to leverage the IoT and physical infrastructure to better engage customers and drive commerce,” said Stephen Hendrick, principal analyst for application development and deployment research at ESG, in a statement. “Xperiel is breaking new ground by providing a highly abstracted language for building event-driven, device-agnostic applications, as well as an IoT-centric connectivity fabric that ties together devices, events, and content to enable customer-engagement and commerce that is far more effective than other available solutions.”

The Xperiel platform features a graphical programming language, dubbed the Xperiel pebbling language, that offers real-time user feedback and analytics. It is aimed at reducing the cost of making physical-digital applications.

The platform also has device-agnostic apps in the cloud. Applications developed with Xperiel are entirely cloud-based without sacrificing native performance. This means they can be programmed once and work seamlessly on any device, regardless of operating system or platform. They can work independently, merged into existing apps, or even run without needing to be installed, and they can be rapidly modified and delivered with minimal effort, Hertel said.

And the platform has a universal trigger fabric, which is the part that I find fascinating. Xperiel connects any hardware or software, past, present, or future, to the IoT. It does this by turning it into an interaction point that triggers Xperiel applications through existing sensors built into mobile phones, wearables, virtual reality, and augmented reality headsets. 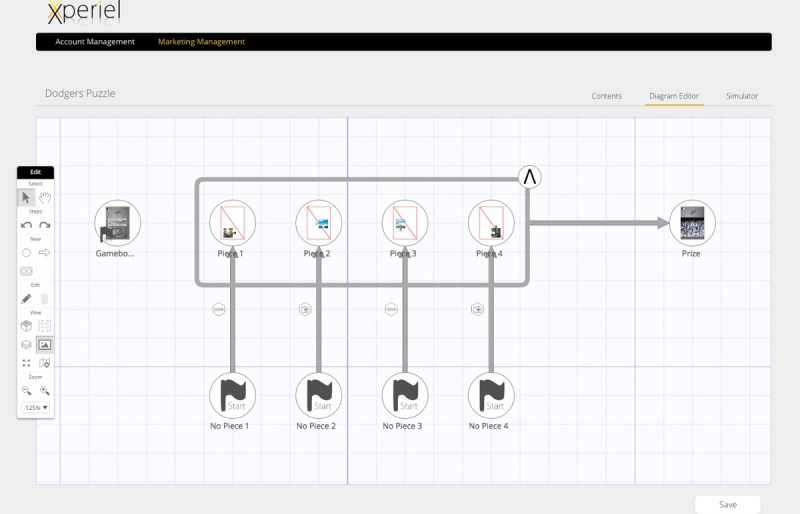 Above: The Xperiel pebbling programming language is intuitive.

Triggers can be anything, such as when an RWW logo comes into view of a smartphone camera, or when the microphone on a smartphone hears a sequence of words spoken in a television commercial. Brands can create games, such as a puzzle that baseball fans have to complete on the smartphone, where each piece is unlocked by an RWW logo on the soda cup or a baseball card.

Hertel showed some examples that the Dodgers are creating, including the stadium sign that recognizes you when you walk into the venue. There’s also a collection of digital baseball cards that serve as rewards for fans who collect a bunch of merchandise.

“Dodger Stadium provides our ball club with unlimited opportunities to connect with fans through their mobile devices during home games. Opportunities include everything from promoting special offers to providing personalized greetings on our big screens to playing sponsored games and contests where they can win meetings with their favorite players,” said Tucker Kain, Los Angeles Dodgers’ chief financial officer,, in a statement. “Xperiel is turning our park and everything in it into a giant physical-digital ecosystem, where every inch of real estate can become digitally interactive, connecting fans with experiences that drive higher engagement rates, monetization, and fun.”

Hertel said that marketing is overdue for better consumer engagement and experiences, as banner ads have lasted far too long in the age of mobile devices. Intrusive pop-up ads are ignored by consumers, but Hertel believes the digital-physical marketing opportunities are just getting started. And now they can be done at about a hundredth the cost of previous integrations, he said.

In a demo day that Pepsi staged, Xperiel built an experiential app for conference attendees. It had engagement numbers 18 times better than rivals such as Twitter and Instagram. The average user fired 50 triggers at one sporting event where the platform was tested. Various real-world customer programs are coming soon.

“We all hate banner ads,” Hertel said. “Ads can be experiential and ecosystem-based, sensor-based, and trigger-based. Stadiums are a perfect place for us to start, as they are a microcosm for the Internet of Things. You have beacons, scoreboards, social media, apps, parking controls. But all of that technology is in silos. We unify it all and deliver a high-quality experience for fans. ”